1. Every week is Taylor week.

It’s such an obnoxious move on her part to release something new every single week until this album drops and I’ll be the first to say I’m getting a little annoyed. Just drop the damn album all at once if you’re going to release every single song week by week. But anyway, I’m down with this little love song. Cause in case you didn’t hear, Taylor’s in love. And she doesn’t need to flaunt it around. Unless she’s writing a song about it. Or like, doing very public dates with Tom Hiddleston (which I still think was all bullshit but that’s neither here nor there.) Anyway, she’s real up front about being chill as hell now: “All the liars are calling me one
Nobody’s heard from me for months
I’m doing better than I ever was, ’cause”

CAUSE SHE’S IN LOOOOOOOOVE.

So… if ya’ll are keeping track, I’m pro: Look what you made me do, Ready for it & Call it what you want. I’m NO: Gorgeous. Next week all this nonsense is over and we’ll have the full album, so you best be expecting a track by track (of the four songs we haven’t heard yet) recap and that seems prettttyyy obvious.

2. Selenas back on that Biebs grind.

Never to be upstaged by TayTay, Selena has created a whirlwind of press for herself this week, which can only mean something is on the horizon. Her and the Weeknd are dunzo (he unfollowed her and her whole fam on Instagram…so it’s official) and all of the sudden it’s 2013 again and Selena’s back on that Bieber D. Are they actually getting back together? Probz not. Are they flaunting their hangouts T.Hiddleswift style for publicity? Most definitely.  They went to church, rode bikes around town, she’s wearing his jersey. I mean come on. All I’m saying is stay woke on the Jelena reunion. 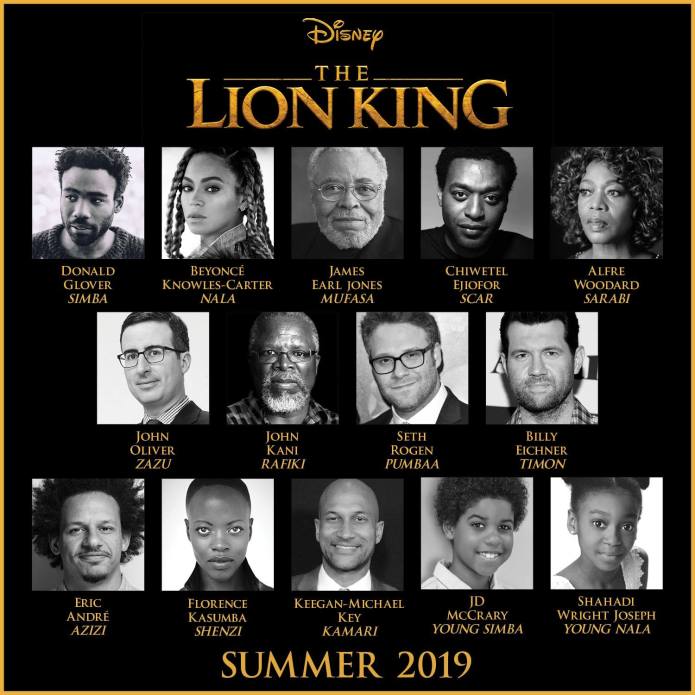 This casually drops the other night and it’s a LOADED cast. It’s good to know that one thing we can all agree on is that Mufasa will be NONE other than James Earl Jones. It’s cool to toss this photo out there for buzz and all but like could we get a little more info? Is this a broadway play? Are they just voicing a new animation? What’s the deal here, Lion King? I need to know if I’m going to be outraged or not. Is it another one of those stupid things where they play the movie and these actors dub over the voices live? I NEED ANSWERS.

Since I watch their reality show and stalk them on social media, I’m personally a part of the Decker family, and this is big news. Viv is PISSED to get another brother. She tried to deflect by making it seem like she was concerned for the balloons but there was no hiding that look of disappointment on her little mug. Guess they’ll just have to go for 4 and hope it evens out. (Shouldn’t be an issue considering how much these two bone and how quickly she gets knocked up.)

5. Lady Liberty is down!

This is only funny because we know that Wendy is AOK and was back to tossin out HOW YOU DOOOOINNN’s after a quick commercial break. I’ve watched this video no less than 100 times and that’s not a normal faint. That’s an “I’ve seen some stuff” look on her face and I will not accept any other theory besides there was a ghost in her audience. That costume doesn’t look that hot, just sayin. I’ll be the truther here and wait for the real story. Until then, I’ll keep watching and laughing out loud. PS – if you like people in costume eating shit videos as much as I do, here’s one of my faves. Go crazy.

Ya boy Chan filled in for Jimmy Kimmel this week and we got to see why we love him so much. Let his smooth moves and goofy ass humor take you into the weekend.

Selena is back in a BIG way. First she’s smooching all up on The Weeknd. Props to her for swooping in AFTER he cut that ridiculous cartoon hairstyle he was rocking for far too long. To be honest I wasn’t really that shocked about this celeb couple news because it’s probably mostly her way to show Biebz that she’s upgrading from a whiny bitch who hates his fans to a smooth R&B sex machine. Bella Hadid unfollowed her on Instagram, because duh, that’s what you do when someone in your Hollywood squad starts banging your ex-boyfriend. Well that, and take a bunch of bathing suit selfies.

BUT THEN, she drops this in our grillpieces and now I’m like oh shittttt SELENASSSSSSS!

Ignore the cr33pster intensely taking a naked girls’ picture through the mirror and just feast your eyes on dat ass. Suck on it, JB. Nice try, Bella. The bigger the hoop….

Joe Jonas did a Guess campaign and oiled up his abs for it. Nuff said. Sick enhancement in the shot with your grey undies though. Definitely didn’t immediately notice that. 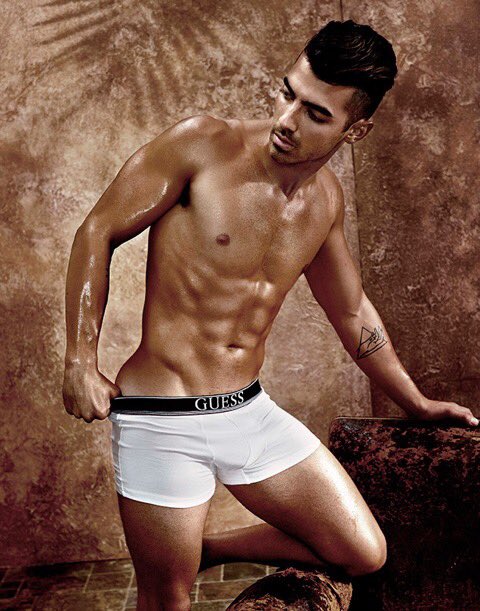 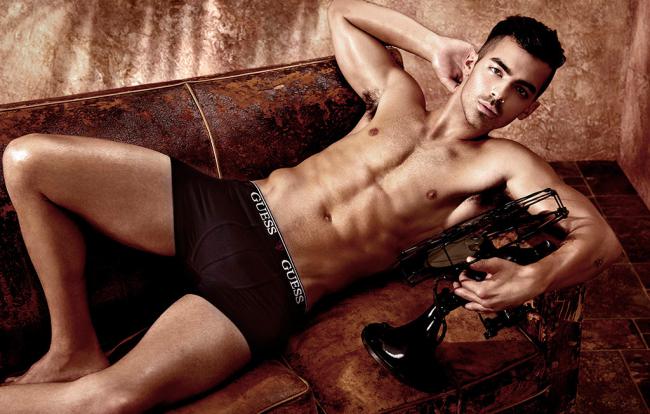 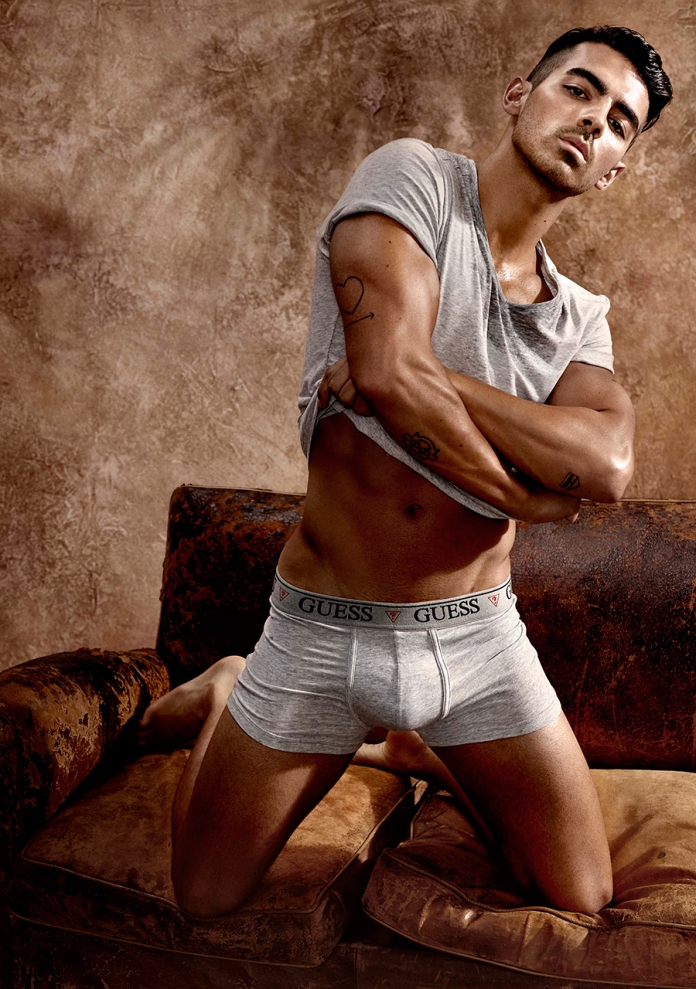 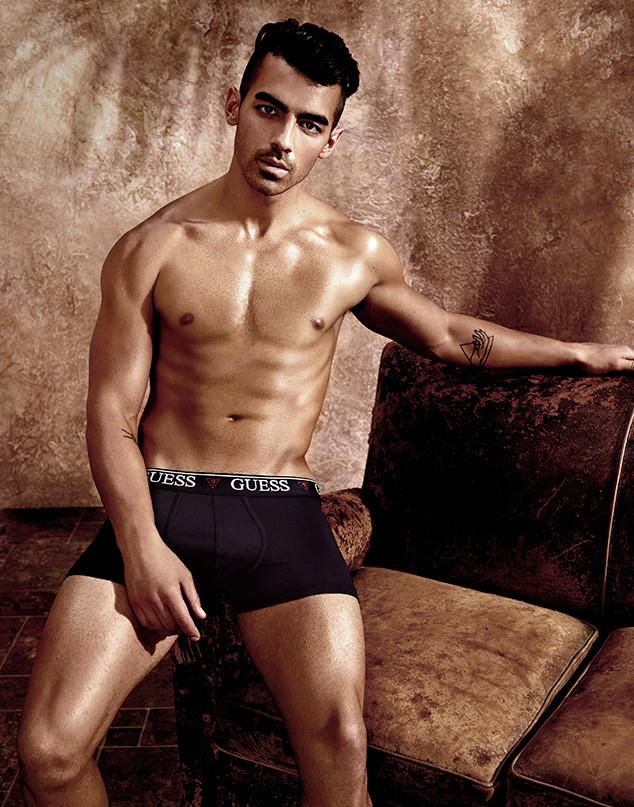 And since Nick is my favorite. Let’s do a little compare/contrast of when he did Calvin Klein:

Those dirty frat bruhs known as The Chainsmokers just dropped their follow-up to Closer. Kneejerk reaction: I’ll listen to it but there’s no comparison. Hard to follow up that heater when it literally still brings the house down every time it’s played. Don’t talk smack about it though because they’ll come AFTER you. Their music is the GREATEST OF ALL TIME.

Every once in a while I like to give a little update to my fellow OTH fans. This week Sophia Bush finally broke her silence on her casual marriage to CMM when she was like, 21 in a personal essay for Cosmo. In true Sophia raspy voiced goddess fashion, she got real deep and metaphorical. Without naming the Chadster, she talked about how she was so young and thought because he was asking her, they should get married. Then she drops some truth bombs about how the right relationships find you and honestly I feel like a new woman after reading it. If you want to hear her preach, click here to read and learn all about how to stop looking for “the one”. Because it’s unrealistic to think the guy you went to high school with is who you want standing next to you when all your dreams come true.

Yeah, Riggins was the sexiest bad boy in Dillon, and Saracen had the heart of gold, but apparently Landry scoops up all the chicks. How they ever put him with Tyra is beyond me but like clearly life imitates art because he’s now engaged to Kirsten Dunst. Also it’s laugh out loud funny that gossip sites were reporting the engagement with his character’s name. No need to know his real name because he is Landry for life and he’ll probably perform with Crucifictorious at the wedding.

The track list for the fifty shades soundtrack was also released and it’s STACKED. Not afraid to say it’s going to be better than the actual movie.

I would’ve done a red carpet except that I only found roughly 14 pictures and I hated them all. It’s kind of hard to post a blog specifically to razz celebrity outfits when I looked like this while watching the awards last night (and all day out in public yesterday.)

So instead I’ll give you the full recap breaking down the LoLz and the things that frankly were a NO (Meghan Trainor style) for me. YA NEED TO LET IT GO.

The Weeknd won the first award and in his speech he spoke highly of Prince with, “I didn’t know him but I was close to him.” This sincerely made me laugh out loud.

Shawn Mendes did a supes emosh performance of Stitches that gave me all the feels. I’m already pretty sick of that song but watching him get down and dirty with it was worth it.

Without even knowing it, I took a bathroom break right as Gwen and Blake were performing. So props to me for having a perfectly timed bladder emergency because if I had to sit through that whole butchering of music I would’ve ripped my ears clean off my head. We get it, guys. You’re together. A couple does not a musical collaboration make.

This is what Lukas Graham looks like. And this song bangs. Plus he actually sang it IRL. 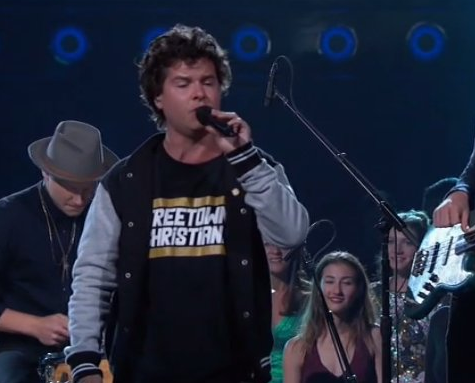 Celine gets the icon award and sings “The Show Must Go On” with a full orchestra and a champagne glitter dress. I mean it was obviously phenomenal but seriously, GIVE US THE HITS, CELINE! Billboard really banked on the waterworks by bringing out her son Rene Charles to present the award and she lost it. What a bunch of assholes these producers are. SHE HAS BEEN THROUGH ENOUGH. When Celine cries everyone cries. She apologizes and throws up a trib to her late husband. PS Her son is only 15, ya pervs. But he can give me a buzz in like 7 years. 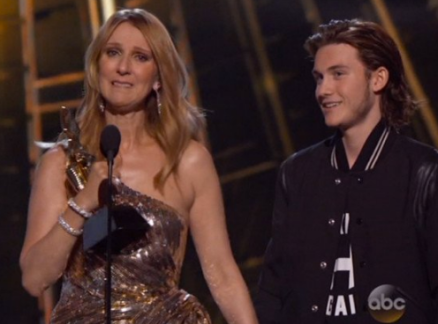 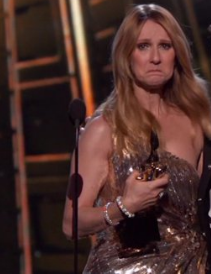 How I'm finishing every sentence from now on. #celine #bbmas pic.twitter.com/W31LqJhQJ2

The Go Go’s Reunion added some much-needed mom jamz into the mix. Watching those sassy middle aged women mom snap all over the stage was gr8. Also reminded me of the days when my mom would play The Bangles for us and we would crush the choreography. Meanwhile, every tween in the audience checked Twitter during this number.

Adele looked like a dime piece in the “Send my Love (to your new lover)” music video. Otherwise it was boring AF.

Rihanna wore a furry animal’s tail around her neck and double decker sunglasses to do a slow jam in green lighting. It wasn’t Work and it wasn’t Bitch Better Have My Money so it was welcome by me. 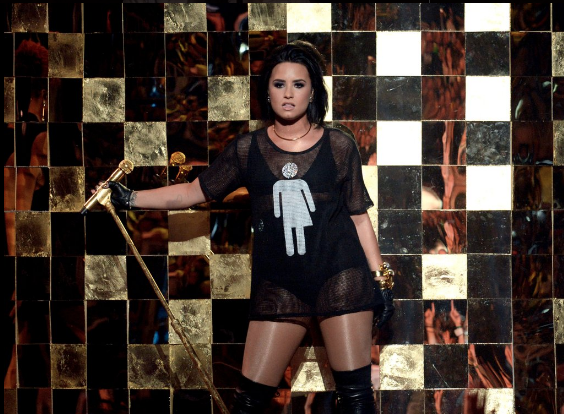 Ariana brought out her bad gurl side.

Britney is the opener because the show is in Vegas and she currently has a residency there. I guess I missed the part where she turned into a full on robot because her dancing was cringeworthy during this medley of hits. Lip syncing was really on point though. Hey is there a show where celebrities can dress up, dance terribly and not sing? Her body’s still tight as hell, so at least she’s got that going for her.

As new host, Ciara shakes her lady bits all over the stage while Russell Wilson nutted just from watching, front row. (They don’t have sex, guys.) Even Luda was like CHECK OUT DEM LEGS, GUYS. As he mopped up drool slobbering from his mouth. 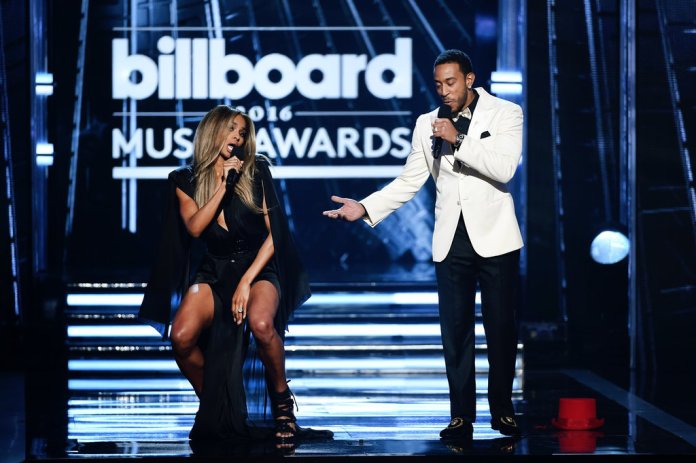 Pink tossed it back to the year 2014 when she graced every awards show with an acrobatic ribbon routine. Except this time she just whipped through the crowd on a spinning clock, touched onstage to sing her song then was lifted with a clock hand at the end. SO ALICE IN WONDERLAND. SO OVER IT. 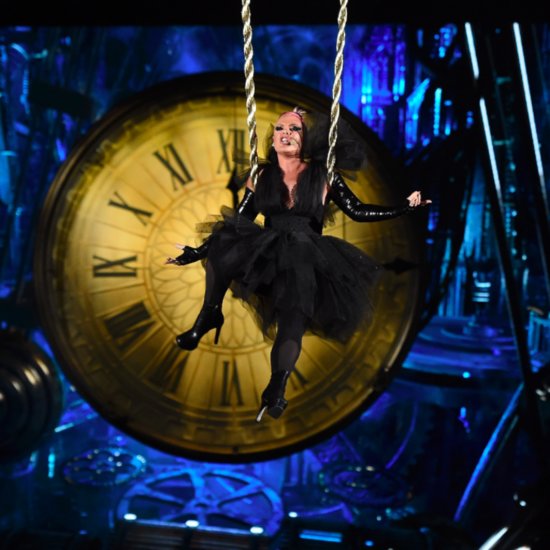 Tove Lo and Nick Jonas pitched their way through “Close” and then teased a smooch at the end. Tongue was honestly the only thing that could’ve saved that performance. Except Nick couldn’t even reach her mouth. Wittle guy.

Kesha gives this dramatic and controversial performance (cough cough Dr. Luke) and yet WEARS A HIDEOUS WHITE SUIT WITH GLITTER DECALS AND BANGS. Like I get that it’s frowned upon to talk shit about this because she’s been through some shit this year but come on. Ben Folds tickled the ivories and she covered a Bob Dylan song. At least she changed it up and showed she actually has a good voice.

Madonna sings “Nothing Compares 2 U” for Prince. Stevie Wonder then stumbled out for a little Purple Rain. It was just like…fine.