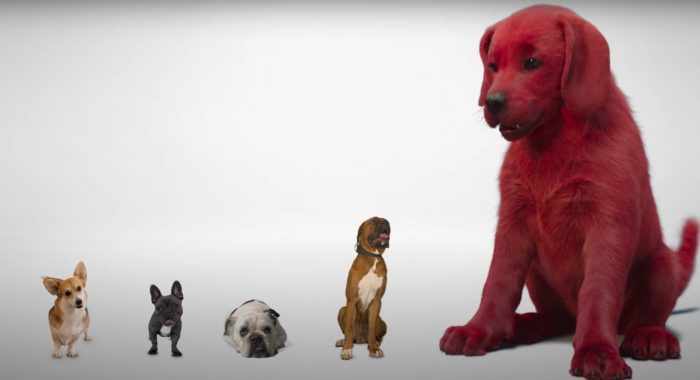 As if everything isn’t terrible enough, Paramount lays THIS SHIT ON US?! ARE YOU KIDDING ME?! I’ll say this until I’m underground NOT EVERYTHING CARTOON WORKS AS LIVE ACTION (insert clap emojis between each word, obv.) Cartoons are adorable and in this case nostalgic. As I write this right now, I’m watching a Mickey Mouse Christmas movie with my niece, who has blessed me with a spontaneous snuggle this morning. Would I EVER want to watch a literal dirty little mouse crawl around and yap about Christmas and Santa? No, that would be disgusting, mice are meant to live in the forest where I pretend they don’t exist and if they ever come near me I’ll kill them. (I’ll run away screaming and get someone else to kill them.) This is why Mickey Mouse and the gang are great. They’re adorable and they have silly voices AND THEY DON’T EXIST IN REAL LIFE. Is there a dog that is bright red and giant-sized in real life? No there is not because that dog would immediately be shot for being a terrifying mutation monster that could kill us all if we pissed him off. I mean look at this thing.

Even the red looks ridiculous. Has this giant dog been rolling in the blood of all the people it has trampled? This is a HORROR MOVIE. Paramount would be wise to pretend this never happened and go back to the drawing boards on this one. I’d love a Pixar-type Clifford. I can get down with an updated animated Clifford but this? This is a hard no for me. And to everyone who thinks live versions of every childhood classic are necessary–knock it off. Stop ruining our lives. To cleanse your palette, here’s a picture of an adorable normal-sized dog with natural coloring frolicking in real life snow with a wet schnoodle. Let it erase real life Clifford from your mind’s eye. 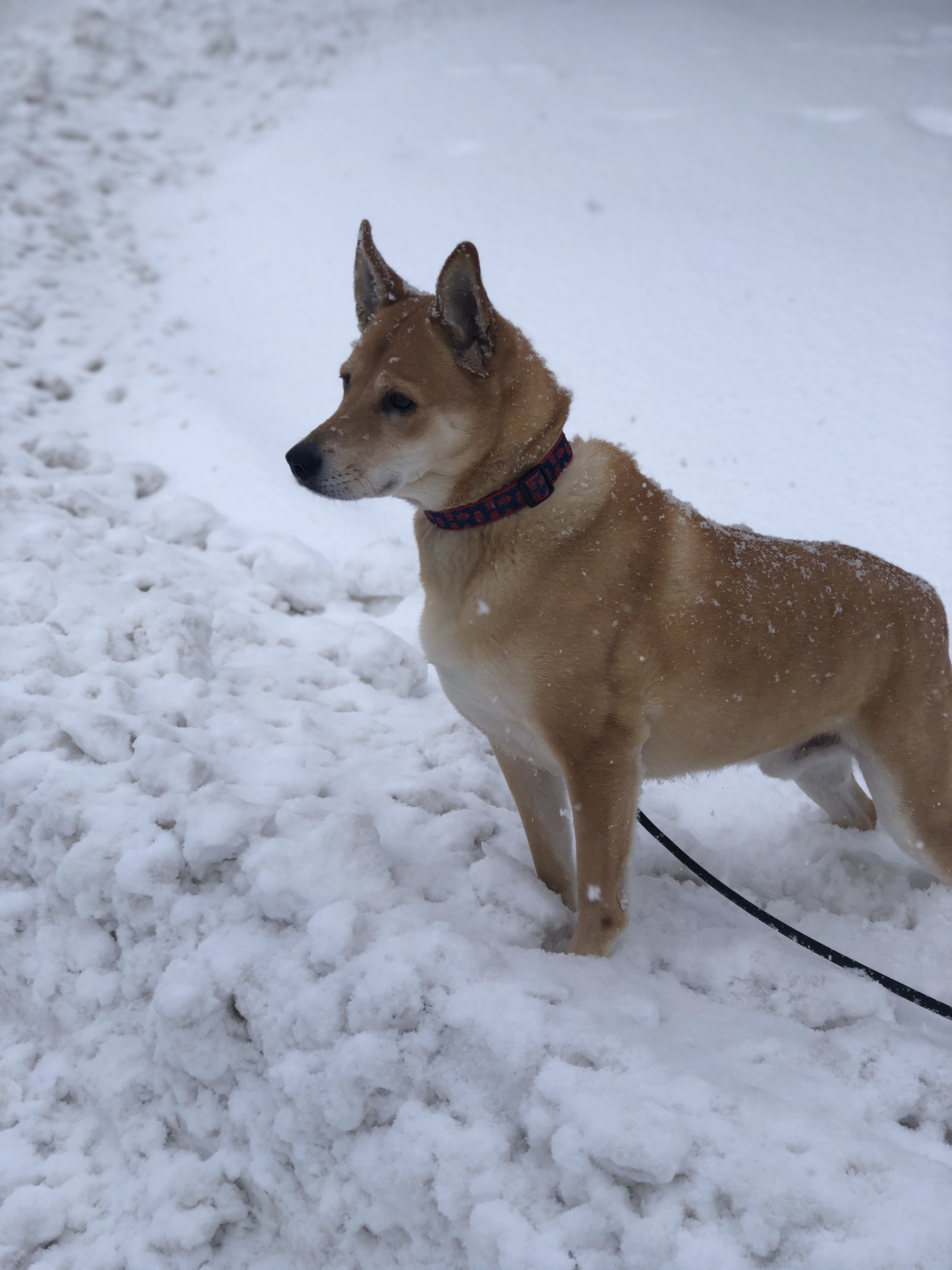 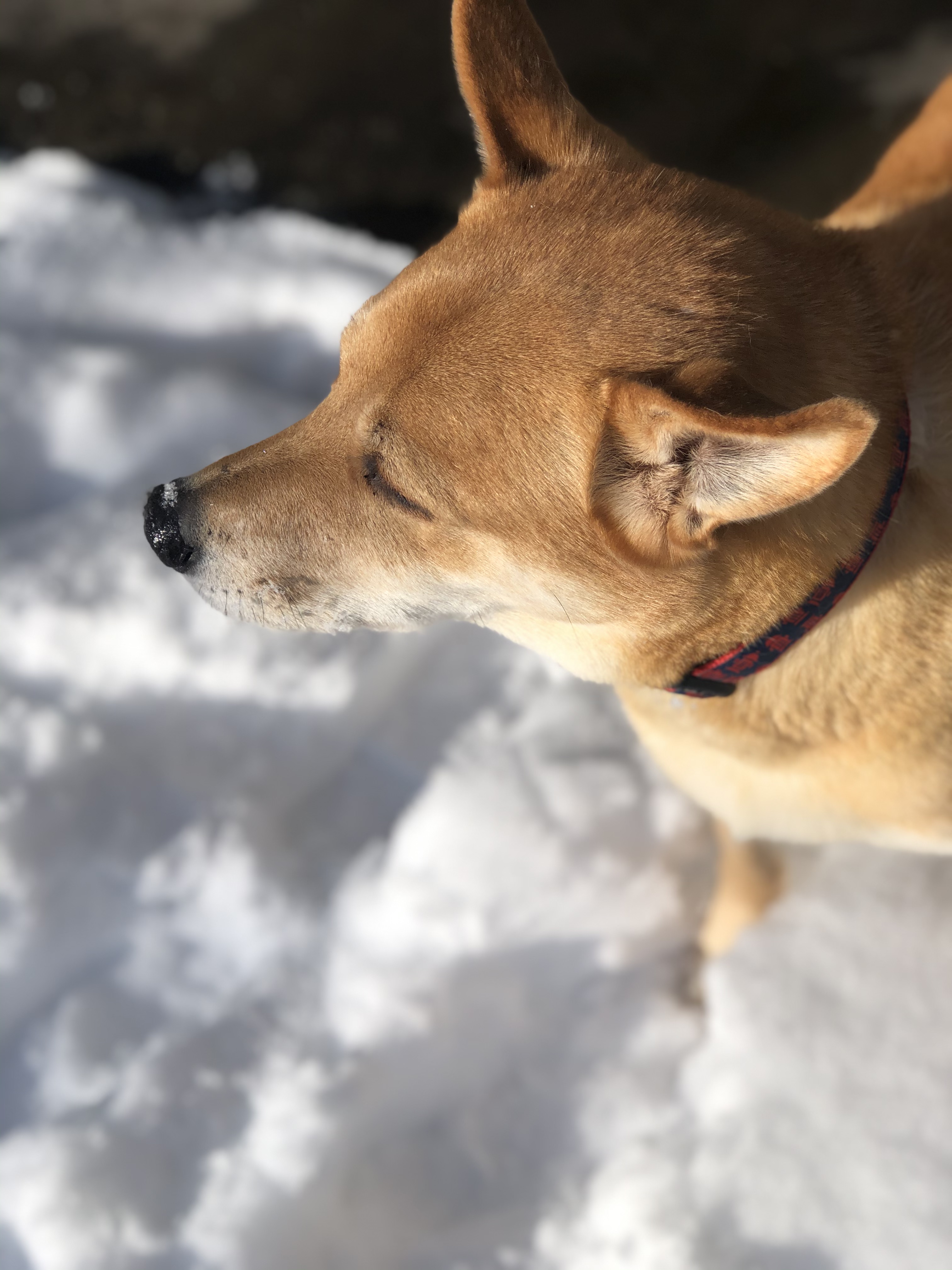 Most people are embarrassed when a nude is leaked and try to hide it or deny it, not JLo though. The Queen of all Queens was like hey I’ve got a new single, check out my rockin hot bod IN THE BUFF. And honestly? Yes, ok. I could stare at this photo until the end of time and constantly find something new to drool over. I mean, Holy Christmas. The muscle alone is enough to make me up my at-home YouTube workouts. Maybe tomorrow morning I’ll do more than a 10 minute stretch sesh that I’m sore from for 3 days after. Also, gentle reminder to anyone who might’ve forgotten: JLo is FIFTY ONE YEARS OLD. Ok, now that we’ve established that, and the fact that I don’t even care what this song sounds like because nothing will top this cover art, I DO have a little bone to pick (not to be confused with a boner, which I’m sure this photo stirred up in males & females alike.) Although I love when my girl JLo texts me–probably a little too much–I feel like I could use a little warning before I get an unsolicited nude. I really have to be in the right mindset to receive a naked pic of someone and that includes this babe soda. The last time JLo texted me was July 26th about her own birthday. That in itself is a little self-serving, but whatever, every girl should have the right to demand a HBD text. But that was 5 months ago. We’ve had a 5 month hiatus from “Hi Baby” texts and then you lay this nudity on me? KINDA JARRING. At least be like “Hi Baby, I’m about to send you a nude, so get READY!” Instead of just going full force after several months of radio silence. Idk, just a tip from one marketing professional to another. Take it or leave it. Also I felt like I was really in the trust tree there because I was the “first to see the cover” and then five minutes later it was blasted all over social. I feel cheap, bb.

3. The Grammys Are Corrupt, Apparently.

Nominations for the Grammys came out this week as well as the host announcement–Trevor Noah because obviously we need more politics tied into awards shows. It seems like not everyone is pleased. In particular, the Weeknd who I just yapped about a couple weeks ago for buying the Super Bowl halftime show. Apparently he can’t buy a Grammy, ZING. But seriously, apparently the Grammys have always been kind of a shitshow but they really didn’t do a great job of covering that up this year. Beyonce didn’t drop an album, she did a Lion King song and I guess hopped on someone else’s track and yet she’s walking away with the most noms. Something doesn’t add up here. So The Weeknd, who was slated to perform at the awards didn’t receive any noms, and therefore he’s like I’m OUT.

Peace out, homeslice! If anyone cares the rest of the nominations are HERE, if you’re like me you’ll either not recognize the songs or recognize them from TikTok dances. #OldPeopleProbs. The awards are airing January 31st and great news my family had enough about reading my no cable sob stories for red carpets and I’ll be getting a hand-me-down antenna this weekend so I can hook the ole bunny ears up just in time for awards szn.

I expect 0% of my readers to watch this 18 min video of Dave Chapelle but it’s there as a reference if you’d like it. Otherwise, here’s the poop: Dave Chapelle was young and broke and signed a deal with Comedy Central for The Chapelle Show. It was a lame deal and he didn’t know any better and the network probs took advantage of the fact that he was poor and didn’t know how Hollywood worked. He realized that after a couple seasons of his show and peaced out, breaking his contract. Since he broke his contract, he doesn’t own his show or make any money off of it. Now streaming services have added his show into the mix and he’s mad that he doesn’t see any money from his body of work. He talked to Netflix and they took it down because they have a working relationship with Dave that I’m sure they don’t want to ruin. He talked to HBOMax and they were like nah, we good. So now Dave is asking his fans to boycott watching his own show until he starts making money off of it. So basically, this is EXACTLY what happened to Taylor Swift minus a doucheroni named Scooter. Here’s the deal, don’t sign a contract that hasn’t been vetted by a lawyer and also don’t get mad if you breach that contract and screw yourself over. HOWEVER, every creator should have the right to their own shit. Whether they buy that back later on in life when they’ve made the dough or they cut a new deal to get some residuals. If my INCREDIBLY well-written Weekly JUices were snatched up by a big biz blog and they were making money off of it but I wasn’t, I’d riot my face off. BUT ALSO, I’d ask someone smarter than me to look over a contract before signing it because I’m just a poor person who writes blogs and if anyone offered me pennies for my blog I’d be like yes sounds great where do I sign? Moral of the story here, I have significantly less money than both Taylor Swift AND Dave Chapelle and I’m very open to negotiations for my talents (of which there are so many, obviously.) Then maybe I could go to brunch and actually get food rather than just showing up to stunt an outfit on all of my haters and order a water. Also, let Dave buy his show and let Taylor buy her music. The end.

Meghan Markle contributed this very well-written piece to the NY Times, where she reveals that her and Harry suffered a miscarriage. Of course, in addition to being this worldly and charitable creature, she’s a phenomenal writer as well. (I’m jelly as hell.) It’s a quick read and a nice reminder to ask people if they’re ok because they’re probably not. Especially this year. But then if you ask someone if they’re ok and they say no, don’t tell them to just get over it. That’s my own pro tip from the trenches of anti-ok.

BONUS: If you are not OK, here’s some Thanksgiving highlights that will hopefully bring you some holiday cheer. Cause nothing slaps harder than shoving your head into a turkey b-hole.

I hope that you were able to cram lots of snacks into your snackhole, bathe in gravy & boom roast Christmas Hallmark movies with your family like I did. If not, please enjoy my commentary on some Thanksgiving classics. I had a lame tweet get A LOT of action and a GREAT tweet about a new Goo Goo Doll face go under-appreciated. Also, my brother in law and dad turned off the dog show for football so they’re both dead to me. Countdown to Christmas begins MEoW!

I’m thankful for my family, who didn’t murder me when I took 16,000 boomerangs of the food that they were killing themselves to prepare for a business Instagram story that got 30ish views. LIFE OF A CONTENT CREATOR, YO. I’m also thankful that I belong to a crew that doesn’t believe in serving sizes. This was just a light snack 45 mins before the feast. Portion control is for wieners. You’re not doing Thanksgiving right if you don’t feel like you’re going to blow. Thank you for coming to my Ted Talk on being a lard.