It was music’s biggest night and the singers put on their best, which unfortunately wasn’t great. The best dressed list was a true struggle to populate and it’s not just because I’m a judgmental asshole. I had people weigh in this time. Let’s get things started with the never-ending 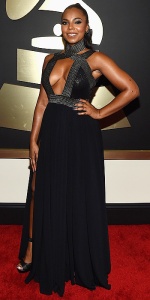 Ashanti. Do less. Also how dare you show up to the Grammy’s without Ja Rule on your arm? Show some respect. 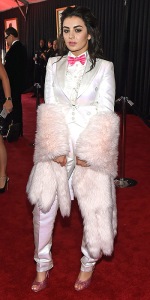 Charli XCX. Do even less than Ashanti. Was this supposed to be a bit? Did I miss something here?

Damn it with those milkmaid braids that look to be weighing your head down, Iggy. I don’t even hate the dress because I’ve seen her do worse, but those braids really rough it up.

Legit question, why is Jane Fonda at the Grammys? In a green leisure suit nonetheless.

I actually don’t understand how Kanye is seen as a fashion icon. His obsession with deep V’s is almost as aggress as his wife’s obsession with showing off her lady bits on the internet.

I had to do a double take because I thought that Katharine McPhee was JWoww.

Kimmy, thanks for gracing the Grammy’s with your presence in a bedazzled bathrobe. Would you like me to grab your slippers?

Bonus points for matching the hair to the dress but yikes put the bewbs away. 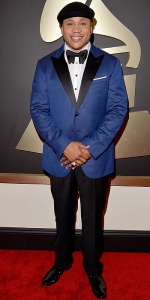 This is conservative for Miles. That being said she looks straight up terrible. Is she coming down from a bender? 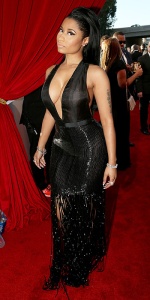 I would expect nothing less from someone who sings about buhholes.

Rihanna saw this online and thought it was cool. I’m wondering if that means she stumbled upon the DIY loofah costumes on Pinterest. She looks like she’s 400 pounds.

Ryan Adams taking his divorce with Mandy Moore well in a Canadian Tuxedo.

The Dumb and Dumber hairstyle, the hideous colored dress and matching lip. No thank you, Zendaya. 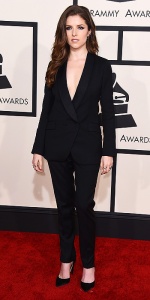 Anna Kendrick with the ever popular this season, tuxedo-no bra combo.

BeyBey with the mermaid waves and form-fitting lace gown. 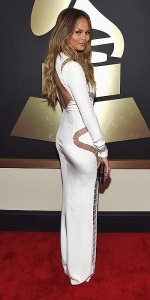 Gwen Stefani wearing the pantsuit well and also keeping up appearances for her performance (see recap). 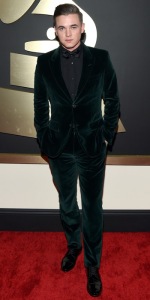 I see you in that green velvet suit, Jesse. ❤ 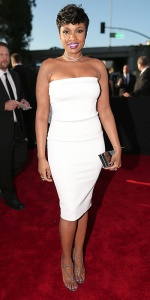 Jennifer Hudson’s hair is looking pretty mom-ish but damn that body! The dress fits her well and looks great.

MJ Blige with an age approps and beautiful gown.

I’m still half in half out on this one, but I think I’m leaning toward in so here it is. Meghan Trainor trying something different.

Not my favorite for Miranda but she crushes her peformance outfit so that helped her make this list. (see recap)

Normally not a hat person but Ne-Yo is lookin real smooth.

Nicole truly looks the best I’ve seen her look in a long time. Keith doesn’t deserve to be on the best dressed because of THAT HALF UP, HALF DOWN HAIRDO. NO KEITH. NO PONIES. (He also seems pretty casj about Nicole TOWERING over him.) 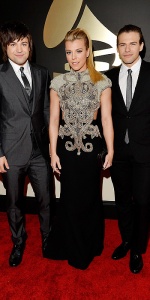 Lovin on that dress on Kimberly and the sleek pony. 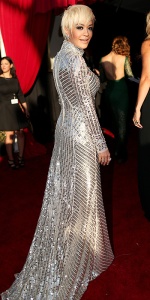 Hate the hair, half in on the dress. I think the sparkles distracted me. And I drank a lot of wine tonight. 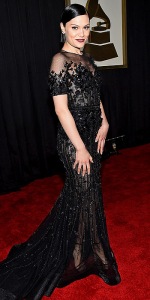 Jessie J in this sheer black number is pretty classy. Never into the greasy slicked back hair.

AND THE BEST DRESSED OF THE EVENING GOES TO:

This isn’t even me being a biased Taylor super fan. This look is awesome. The dress fits well, has sass in the back, is a spicy color and the legs + purple heels just seal the deal for me. Could’ve gone without the earrings that look like ones my mom used to have that I thought were costume jewelry and she was like no these are real earrings I wear in public, but whatever. I’m not going to nitpick, it’s not really my style. 😉

Keep reading for the full 4 hours condensed into highs, lows and cat naps in my Grammy’s Recap.