1. RyGos played us. Because of course we learn about a Ryan Gosling/Eva Mendes pregnancy like while they’re popping that thing out. Gos Girl #2 arrived this week and they’re really sticking with the Spanish names, as this one is Amada Lee Gosling. I did some research on the Google and Amada means “beloved” so I guess that kinda sucks for Esmeralda. She’s no longer the baby –who, face it, gets spoiled in every family AND she got the short end of the stick in the naming department. Roof stoof, girl. Since we’ve never even seen baby numero uno, don’t hold thy breath for a snapshot of the newb. Damn celebs and wanting their privacy. So selfish.

Apparently Robert Buckley and Lea Michele are dating, which I approve of very much. Lea is a babe, Robert is a babe. Teen drama royalty. End of discussion.

3. What Would Playboy Spence Think? (WWPST?)

On May 4th 2016 I got engaged to my lover and my best friend @kaitlynn_carter. I couldn't be more in love with this woman and I can't wait to spend the rest of my life with her. 💍👰❤️🎉🎊

Our favorite LA slut, Brody Homeboy Jenner is finally settling down. I mean, realistically he was already settled for quite some time now but the ring makes it official. No more Vegas birthdays with Frankie and the boys, or smooching Jenn Bunney on her birthday. Clearly I’ve never moved on from a fictional reality show roughly 10 years ago. Whatever. Either way that’s a rock right there! Speaking of rocks, do you think Spencer will be invited to the wedding? And if so, will he give them marriage crystals? Okay. I’m done. 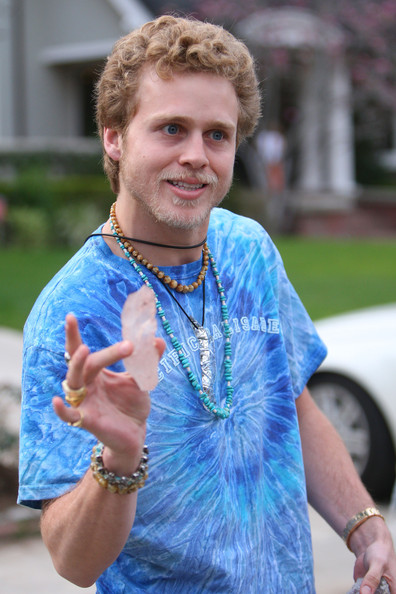 4. Marla Hooch still has it.

A film festival staged a reunion for the movie A League of Their Own, because reunions are SAH HAWT right now. As beautiful as Marla Hooch was in the original film, if this picture is any indication, she’s still GOT IT. Hot damn, ladies! Sooks that they couldn’t get Rosie or Madonna… or even Jimmy Dugan. I feel cheated. JK I don’t because this picture made me laugh out loud.

I saw a bunch of musicians tweeting about how this performance was a huge deal and since I suffer from severe FOMO, I powered up the ole YouTube and got to steppin to see what this was all about. Pretty cool considering this song as it was released was a techno beat and Mike stripping it down and making up lyrics on the spot made it a whole lot more relatable than poppin pillz on an island. Plus, if Matt Nathanson approves, SO DO I.

BONUS: Prince delivering burns from beyond the grave.

Prince, may he rest in peace, is still reminding the Kardashians that they’re garbage from 6 feet under. And I respect the hell out of it. First he kicks Kimmy off his stage for dancing terribly then he demands no Kardashians set foot on the same set as him. What a baller.

Although technically summer started a few weeks ago, I present to you, this year’s Summer PALOOZA! Every year since roughly 2007, my sister and I would fire up the Limewire on our shared desktop computer and download our favorite current pop songs for a banging summer windows down jam mix. The summer palooza tradish hit a little snafu in 2013 when we had some difficulty agreeing on songs, had to make a 2.0 halfway through the summer and then 2014 we didn’t make one at all. We’ll refer to that as the year that summer never came. Anyway, IT’S BACK BITCHES and as the sis and I gathered round our laptops on 4th of July weekend, bickered over songs and hand-picked this mix like a couple of losers who were totally not about to watch the movie The Duff, I decided that this should be shared with the world. Happy Summer!