1. What Would Ryan Lochte Do? Lie about being robbed at the Olympics, apparently. It’s a real shame his reality show got cancelled because ratings would have soared through the roof for this shit.

Ryan Lochte, the bro who showed up with frosted hair, wore grillz at his gold medal ceremony and trademarked the catchphrase “Jeah”, claims he was robbed at gunpoint and when the robber told him to get on the ground he turned into Duane, otherwise known as Kimmy Gibbler’s hamlet and cheese.

Then he skipped on outta Rio with his lady friend. Not so fast, RyRy because it seems like you messed with the wrong corrupt country. Rio smelled a rat and yanked Lochte’s swimming  buddies off their plane to question them. Can you imagine having to be a sidekick to Ryan Lochte and then ON TOP OF THAT, getting held back in a country that had dead bodies washing up on the shores just because you had a few too many beers and decided to go along with your drunk friend’s dumb story?! The real events have finally surfaced today and it entails drunk bros vandalizing a gas station bathroom. So it turns out Lochte was just getting in front of the story. What looks really bad? Headlines about American Olympians (some might say heroes) going on a boozy tirade at a gas station. What looks really good? Them getting robbed at gunpoint and surviving. Round of applause for that spin zone, Ryan. You really sold it AKA you created a conflict between Rio and the US, made your buddies pay to leave the country and now look like an even bigger doofus than you did before.

PS If you & your boys wear Yeezy’s out on the town in Rio and brag about it on social media, you 100% deserve to be robbed at gunpoint forrealz. 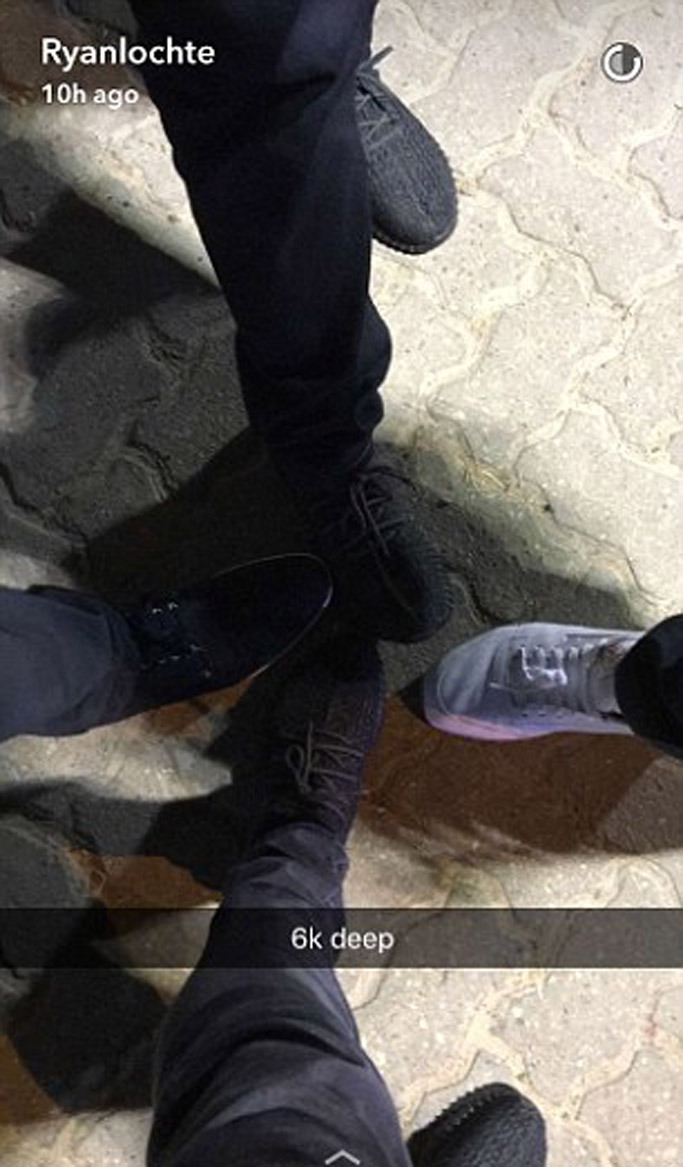 Double PS, my very last final in college (shout-out to Olympics class) was the question “What is Ryan Lochte’s catchphrase?” So not to brag but I have a college degree AND I once bubbled in “C: Jeah” for an actual grade. This seemed like a fitting time to toss that story into the mix, because it’s embarrassing, but not quite as humiliating as making up a crime and creating an international incident over it.

I mean the minute this bid started yapping about how much she LOVED Zac Efron and had a fullsize cutout of him (creep, much?) I was like yeah some talk show is going to cash in on having them meet. I didn’t think they would fly Zac out to the actual Olympics, but whatever. Hey Simone, you just won a bajillion gold medals…LEAVE SOME FOR THE REST OF US. Ugh, whatever. Not bitter or anything. But like seriously? The video is pushing it. We get it. You guys kissed a lot for Instagram. Call me when he sticks his tongue down your throat.

3. Biebz is off the grid. I’ve been saying it ever since Biebs went in on fans taking his picture and strolled barefoot around the Boston Common…pop your popcorn because he’s on the fast track to a Britney/Lohan/Amanda Bynes worthy meltdown. It always starts with the fame-hating and spirals from there. Some take it to head-shaving levels, others tweet about Drake murdering their vag. To each his own. It seems as though we’ve got a classic case of everyone stop judging my life and I for one can’t wait to see where this goes.

To catch up anyone who doesn’t follow tween drama–Biebs has been whoring out Lionel Ritchie’s daughter, Sophie (who is basically Kylie Jenner 2.0) and he’s getting pretty sad panda that no one wants to see his latest bae vomited all over InstaG. So he threatened to delete and that’s when Selena hopped in to be like hey guess what no one wants to see your bang buddies, stop being so dramats, your fans love you. Obviously there was some bickering via Instagram comments. Justin replied with, you used me for fame (no disrespect) and there were some cheating allegations tossed back and forth. Realistically this part was like watching your trashy high school friends air their dirty laundry on a facebook status and everyone weighing in on it. It was entertaining for like 3 minutes then we all decided to go out and live our lives. Then Biebs deleted his Insta and Selena’s all:

(Cue the Selena H8) WHOA. THE THREATS WERE REAL. BIEBS IS OUT. No more pics of his hoes in different area codes for us! WHAT WILL WE DO WITHOUT THEM?! Rejoice in the fact that we’re one step closer to a Bieber Meltdown, THAT’S WHAT WE’LL DO.

As one of the OG boytoys with spiky hair, I’d much prefer to have Ryan back on the scene and Biebs off. This song sounds kinda like something JB would drop, except I actually like Ryan, so I will listen to this on repeat for the rest of the month and hope that once he gets off his My2K tour, he’s back in our lives for good. Bonus points: this island beat makes me believe summer will last forever. HORNZ ON HORNZ. CLICK HERE TO LISTEN TO FULL SONG.

5. The ChadBear will do more than shit his pants on TV.

I guess Chad didn’t want his lasting legacy to be taking a dump directly in his shorts on Bachelor in Paradise, so somehow he’s secured a cameo on the upcoming ABC Family sensational hit: Ben & Lauren: Happily Ever After. Does it make any sense? Of course not, and there you have the reasoning behind every paid appearance from a Bachelor(ette) alum, ever. Probably one of the smartest PR moves to be made though. That show was a shoe-in to be a dud and now that people hear Chad’s name associated with it, it will be appointment television. I’m already locked in to see what will go down. Call me a sucker for Chad, I don’t care, I’m all in–especially considering the only time Ben and Chad have ever been brought up in the same sentence was this: