I never thought I’d have a reason to thank the VMA’s but instead of teasing this very clear only reason to watch that awards show full of preteen bholes until the last five minutes, MTV/TAY gave the people what they wanted right off the bat. This masterpiece music video premiered within the first hour of the show and allowed me to check out for the remainder because it’s obvious that’s all that matters (it’s also obvious that I don’t turn to MTV for my politics and current events news.) Anywho, I could probably watch this music video every day this week and find something new every time, but in the spirit of riding comeback Taylor’s coattails, here are the top five fuck ALL THE WAY off moments from a RIDICULOUS music video.

You know what would be cool? Being rich enough to LITERALLY bathe in diamonds. It’s even cooler getting to bathe in diamonds & money just for F’s sake and looking like a babe while doing it. Definitely never thought I’d be down with the red claws on TSwizz until I saw it surrounded by riches and matching her lip perfectly. Now I’m all in.

Orange isn’t my favorite color but can’t pass over the shots of dis sly bitch just swinging around a birdcage wearing boots that lace up to her nipples. Can I make a music video just for the wardrobe? It’s like the best game of dress up a girl could dream of. There is literally no point to this scene other than just looking cool AF and hangin loose from the top of a birdcage big enough for a pterodactyl.

Domanatrix-cloning-Taylor can GET. IT. I didn’t think all of the sultry looks from the Blank Space video could be topped but then angsty T killed Blank Space Taylor and was like I can look even hawter. Oh all her Squad looks exactly alike (cough cough excluding Lena cough) well guess Tay just has to slap on a lil latex and say something about that. To be clear, what she said was “look at my rockin bod.”

2. The Opposite of Awkward Dancing.

No one can ever call her awards seat dancing awkward ever again. Once you lead a pack of gays in a little thigh slapping and dropping it down low in fishnets, you seal the deal for professional dancer in my book. This entire dance sequence was impressive as shit. H8ers say she stole it from Beyonce, I say since when did Beyonce invent a dance posse in the flying V? Ducks fly together, Yonce. And this ain’t no Darryn’s Dance Grooves.

This was without a doubt the COOLEST part of this video. Taylor is known for her over the top music video/live performance personas and she freaking STOOD ATOP A PILE OF THEM CLAWING THEIR WAY TO SURVIVE. I studied video production in college (humble brag, I have a degree in TV) and even I have no clue how this scene was created but it is BOMBBBBB.

Piggybacking off of the mountain of music video Taylor’s is this spectacular end skit where Taylor calls out all her own bullshit. Playing the victim, getting mad about being called bitch, the surprise face, the fake niceness (and country accent), being excluded from this narrative. BRAVA, TAY, BRAVAAAAA!

PS: Could’ve done without the immediate nightmares though.

The MOST important events from the end of last week/this weekend.

1. Solange Knowles gets married to video director Alan Ferguson today and releases a family photo that actually made me shiver. So FIERCE.

Can you imagine being the only asshole in a Knowles family photo who didn’t get the memo that smiles are not welcome? I’m looking at you, left of Beyonce.

Speaking of assholes, let’s see what Solange wore as her “arrival” outfit: 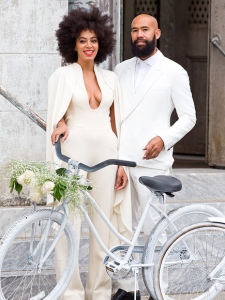 They arrived on white bicycles and she was wearing a jumpsuit. No news of her street fighting Jay in said jumpsuit so it seems it was a happy occasion. If we’re being honest Yonce probably stole the show anyway. Don’t invite a Queen to your wedding and expect her to hide in the shadows. Guarantee she sneezed on Solange’s jumpsuit and the jumpsuit got sickah.

2. James Van Der Beek ran into Joshua Jackson on Saturday and Dawson’s Creek freaks like myself got to indulge in a present day Pacey/Dawson insta. Just a couple of bros from the Creek, rising above their mutual love for Joey.

3. Robert Pattinson did THIS to his hair:

And I puked all over the place. That was a real mess to clean up. Oh how the Cullen has fallen. Seriously clean it up, Rob. He’s also reported to be dating an individual named FKA Twigs. If anyone has any suggestions on even how to pronounce that fake life name please step forward in this very difficult time.

4. S Club 7 reunited for a charity show and gave us all an excuse to piss our pants. Here is their performance:

Immediate thoughts upon watching it: The men of S Club all hit the carbs real hard in the past few years and were looking a little chubs.(Minus Jon, who looks the same) Jo has Kate Gosselin hair, which is fitting because she looked like a mom chaperoning the group. Rachel is still the absolute banger of the club. Hasn’t aged a day, all bets on everyone hating her just because she’s still got it. Although Tina in those sparkle hot pants was a surprising curveball. They collectively pulled the classic, “if we dress like the era we were famous in, no one will remember that we’re middle aged”…but we all remembered. After performing their first banger (S Club Party) they transitioned into another tune (Reach For the Stars) where Jo had to solo and clearly couldn’t hold her own. Whenever a singer is belting for 1 second and has to ask the audience to sing it, it means they need assistance, STAT. Bradley and his ombre hair stepped in to take over. He handled it much better. The coordinated dance spins to Bring It All Back To You were so on point. We were then treated to an electronic dance break that was a liiiittleee on the stiff side. Don’t worry though because they all stuck a pose at the end boy band style and it was the best finale I could’ve asked for. Props to them for making a comeback for charity, and I think I can speak for us all when I say that if ABC Family (Formerly Fox Family) doesn’t start playing re runs of S Club 7 soon I’m going to write a strongly worded letter. 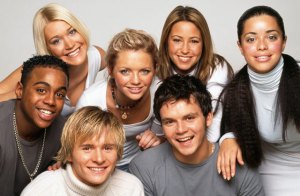 The gang in their heyday.

5. This is last on the list because it’s bullshit news, but Hallmark & Lifetime holiday cheeseball movie season is upon us and I understand that everyone will NEED full recaps of the hundreds that I will consume before Christmas. I’m here to tell you that I will be delivering. If your guilty pleasure is Santa’s elves playing matchmaker and a couple falling in love amidst the smell of gingerbread houses and sharing a first kiss under the mistletoe, I will be posting which ones are the best (by best we all understand that I mean cringeworthy but watchable) so stay tuned for that merry addition to this blog.