I often like to milk two blogs out of awards shows and even though barely anyone reads these recaps, I laugh at myself while writing them, and that’s truly what is most important. Here’s the top five things to take away from last night’s AMA’s, which packed a lot of good performances into an awards show that gives out fake awards to whoever shows up, basically.

🎥 | LQ Video of Selena Gomez’s performance of “Wolves” at the 2017 #AMAs #SELENAxAMAs pic.twitter.com/O0fzp6lLuq

Everyone was buzzing about her performance because she’s made it VERY WELL KNOWN that it was her only live performance of this year due to GETTING A NEW KIDNEY and everything. Well, it sucked. Real hard. She basically came onstage just to writhe around a car in a white nightie, covered in fake blood. Girl didn’t even attempt to lip sync. At one point I’m pretty sure she fell asleep on top of said car. If she didn’t, then I sure as hell did because it was a REAL snooze. Also, can everyone stop associating her Lupus/kidney surgery with everything that she does? She’s recovered. It’s not like she walked out of the hospital to give this performance and couldn’t dance too hard or else risk popping stitches. Chill on it. Notably absent from cheering her on, though? Biebs. He seems like a super supportive BF.

2.  Xtina is dead. Haven’t seen ole Xtina in a while (apparently people have forgotten how her last name is pronounced) and suddenly she’s doing a Whitney tribute and the only reason I knew it was really her was because she held her ear and waved her hand up and down when she did vocal riffs. Otherwise, who is this woman with Kylie Jenner lips and how did she get the honor of singing a Whit medley? 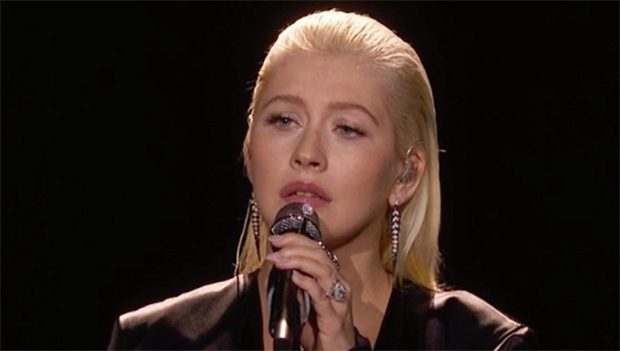 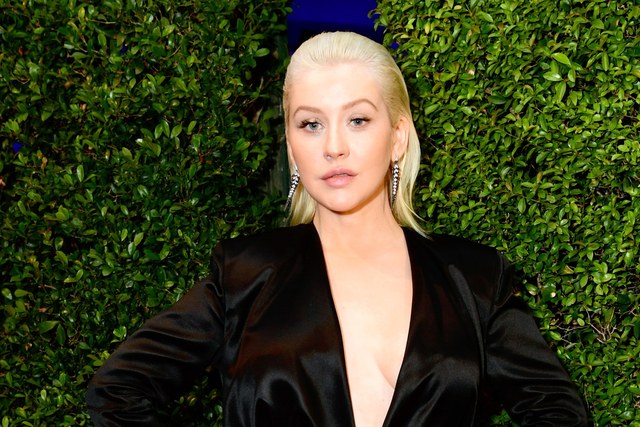 Since we now know that it really was her…and that People is crediting “natural makeup” for her completely transformed face, it would be wrong of me to say that she didn’t crush it because she has a powerhouse voice. Even if Pink DID give her stank face. (lolzzzzzz firing up an old Lady Marmalade feud, what The Salty Ju does best) 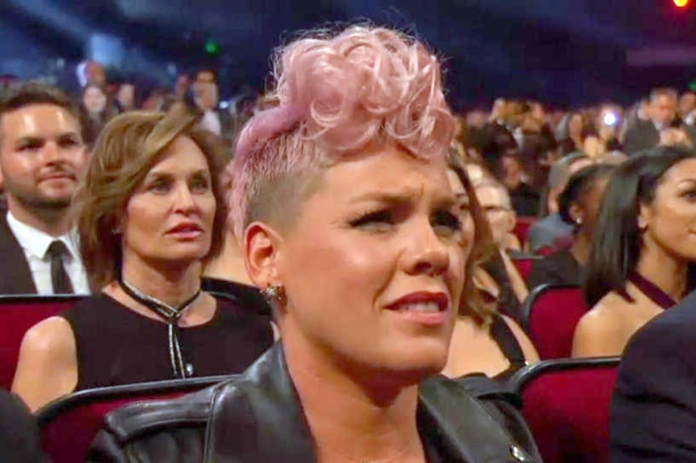 3. Pink makes acrobats cool again. SPEAKING OF PINK, as soon as I heard “and Pink will be making history with a performance from the sky”, I audibly groaned. You guys KNOW how much I hated the played out ribbons performance. It’s like for 3 years that’s all she knew how to do at awards shows. Well I bit my tongue real quick because what followed was the most amazing thing I’ve ever seen. I mean she literally went face down off the side of a building while performing. I was getting naush just looking at it, so you have to be another level of badass to be like yup I’m staring at the ground 500 ft away from me and just crushing choreography and singing. She won the night and that’s pretty obvious.

Ok, it’s going to be hard for anyone to top this @Pink side-of-a-building performance like, ever. 😱 🙌 #AMAs #AMAsOn2 pic.twitter.com/jqbBsKuGXu

4. Ashlee Simpson is back.

The Ross family was a focal point of the evening as Tracee Ellis Ross hosted and Diana Ross received a “you’re still alive and killin it” award, so obviously I was all about seeing how former punk rock princess Ashlee fit into this family dynamic. Turns out, her and that beautiful specimen Evan created one of the most adorable babies on this earth. During Diana’s performance the camera panned to her singing along and just living her damn life as a famous toddler. But then, as soon as she was pulled onstage at the end, she froze and pooped her diaper. Ashlee quickly turned into a stage mom dancing off to the side to get her kid to perform for the cameras and it was a real failure.

Okay, Diana Ross' grandchildren joining her on stage is the cutest thing in the world! #AMAs pic.twitter.com/ICOa3Oikbt

What a whirlwind of emotions it was keeping up with that family though. Props to her grandson who not only showed off his best dance moves right in Jagger’s grillpiece (stage fright doesn’t extend to all of the Ross children) but also jacked the mic to tell his grandma that he’s so proud and go off script giving every producer of this show a G-D heart attack. You da real MVP.

Watch @DianaRoss' grandson dancing up a storm at the end of the #AMAs . #AMAs2017 @TraceeEllisRoss pic.twitter.com/wvavaSYZk4

I legitimately had to google BTS after they flashed the camera to a bunch of Asians with the same haircut over and over again. The internet said these guys came out with their first single in 2013. TWO THOUSAND THIRTEEN?! I graduated college then. THAT WAS A LONG ASS TIME AGO. And they’re supposedly famous?! You shut your whore mouth. I patiently waited for them to take the stage to see what it is that they offered that would make them “mega international superstars.” Wanna know what they did? They had robot auto tune voices (I’m assuming this music was created in a studio just with a computer) that sang in a different language, and these matching mushroom cut boys danced to it. That was it. Girls knew the words and were legit in TEARS over this performance. WHAT AM I MISSING HERE?! WHAT HAS THIS WORLD COME TO?!

Wait how old am I? What’s happening? Who is this band? Is this English?

So we’re cool with a group of guys being famous for having robot voices that sing another language as long as they have jazzy choreography? #BTSxAMAs