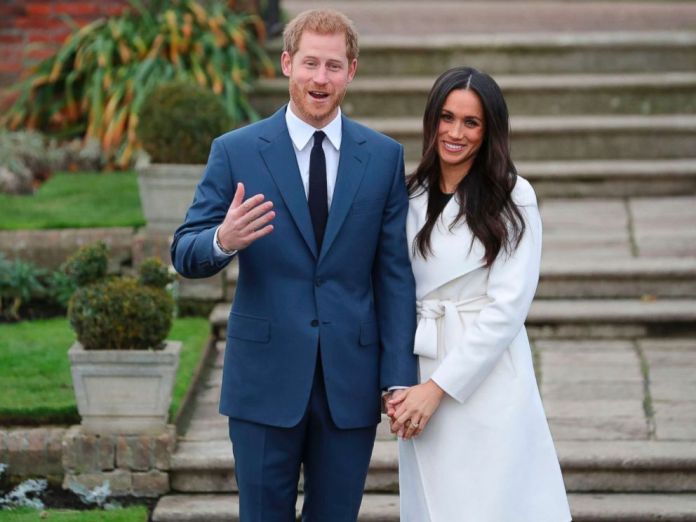 Remember when I announced that Meghan Markle and Prince Harry were dating and that everyone was taking a royal dump on it because she’s American and also half black? WELL GUESS WHAT, NOW SHE’S GONNA BE A ROYAL. I’m down with it. I was never against it. Was it a little sooner than I was expecting? Sure. But have you seen her stems? I don’t blame Harry one bit for locking that shit down.

It’s funny that America always had this obsession with party boy Harry and who would tame him. I mean there was a literal trash ass reality show where they led Americans to believe they were dating Prince Harry just because they put an orangehead in a suit and had him take the girls on fancy dates. At the time I was like joke’s on all of you, Harry will never settle for a trailer-livin, reality show appearin, AMERICAN. Joke was on me, apparently. American is what he settled for. She’s living out every girl’s princess dreams and I applaud the hell out of her. Gear up for non-stop Heghan fever. (We’ll work on that.) We’ll follow them to every public appearance, analyze their hand holding, have apps to virtually try on her ring, all leading up to the royal wedding that will be bigger than all the awards shows combined. I CANNOT WAIIIIIIITTTTT.

Ed’s baller enough to call up ‘Yonce and be like wanna sing this beautiful song I’ve already released with me? And she’s like YUP. It’s even better now. I didn’t think it was possible but the magic of their two voices combining is like Fergie and Jesus. What a duet.

I just wanted to remind everyone that I still think Demi is QUEEN and I’m loving everything that she’s doing lately. I already ship a good music video real hard but this one was especially gripping. WHAT A ROLLERCOASTER OF EMOTIONS. First thought, Jesse ❤ What a good pick…smokeshow city. Second thought, they look so beautiful together and they clearly have a good sex life. Then WHABOOM, I see we’ve taken a turn for the “this is gonna be forever or it’s gonna go down in flames” territory. One thing’s for certain though and that is mah gurl Demi looks flawle$$ on her fake wedding day. Could’ve done with less of the shitty acting, tbh. But it all played into the drama and I get it. Song also bangs, so that doesn’t hurt either.

Pack your bags and get ready because the original @JerseyShore gang is headed out on a family vacation coming to MTV in 2018!

Never thought that in 2018 we would still be watching self-proclaimed guidos dick around on vacation but then again what can we predict in Hollywood anymore? These washed up trash monsters are mostly settled down now…Snooki and JWoww are parents (yikes) which apparently means it’s time to get the gang back together. JShore when it first debuted was MAGIC. Angelina getting called a dirty little hamster by Pauly D was one of my favorite moments in TV history. Then by season 4 when they’re pulling in Snooki’s friends (from Poughkeepsie, NY) as part of the show it was like eh ok. That’s enough. Probably the only thing that entices me to tune in is that Sammi Sweetheart won’t be there to sob and scream RAWN, HOW DARE YOU?! over and over and over again. Count me in.

As you all know, every year I recap the VS Fashion show so that we can laugh at the fluff material they film with dumbass underwear models to fill that hour timeslot on CBS and also summarize which singer interacted with the models most awkwardly. Well you know what? This year was THE WORST. Not only did I get false confirmation that Taylor Swift would be performing, but instead of Tay they had Miguel and a jazz singer. MIGUEL. IN 2017. The last time we heard of Miguel it was because he had committed a murder right in front of our very eyes.

Shoutout to that time Miguel killed somebody. pic.twitter.com/OQJhKpAmt2

What a joke of entertainment selection. I couldn’t even get excited for Harry. Honestly. The only thing I will post about the show is the model who cockily flashed the dubz peace sign then proceeded to fly through the air and fall flat on her face. Most brutal thing I’ve ever seen is that they didn’t edit her fall out OR THE SOBBING that occurred afterward backstage. What a commitment to ruining this girls’ career and completely embarrassing her. Feel free to watch it back here.

Ming xi handled her fall so well and she still smiled through it
You go girl pic.twitter.com/Qn3YX1goVC