We have arrived in Buenos Aires: Where men in berets ride donkeys (probably to work), also where JoJo wears a skintight red dress, and open white trench coat while petting strange dogs in a park. She’s one with culture.

Wells admits he’s the only one who hasn’t kissed JoJo and essentially gives every other guy a chance to judge him real hard and razz him in front of JoJo, which is basically social suicide. The boys spend FAR too long talking about how much smooch pressure there is. And Wells admits he was waiting for the perfect moment to kiss JoJo, thus putting TONS of pressure on it. I mean it’s totally sweet that Wells is thinking like a rom com, but we should probably quickly remind him that JoJo has been AGGRESSIVELY swapping spits with roughly 15 other guys the entire time she’s been dating Wells. Therefore, romance is dead. About as dead as being super awkward and anticipating a kiss on a performance art date. Finally, while sloshing around a see through pool together and weirdly slopping into each other, they kiss. THAT was the moment?! Rly? Anyway, later on, Wells gets sweaty and talks about his past relationship. He says obviously passion fades in relationships and JoJo is like uh uh honey. He does not get rosed. JoJo wah wahs about it while a dramatic montage of their date plays and she stands in the middle of a crowd while it rains. WHAT JUST HAPPENED?! Did JoJo suddenly step into a music video? We’ll never know. (Nor do I want to.)

James Tay and his jheri curl are feeling super self-conscious being surrounded by a bunch of babes with the same haircut. They play a little futbol with the locals where Jordan pulls his shirt over his head for a six-pack showdown and Alex immediately copies him because Alex is a tryhard. James makes a goal and gets to kiss JoJo in front of everyone and show the other bros you don’t need chiseled abs to get closed mouth kiss the girl…but like it doesn’t hurt your chances either. 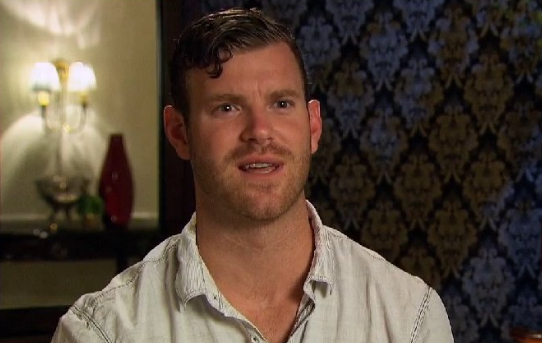 At the night portion of the date, camera one is specifically angled to catch JoJo’s wandering hand as it roams near Luke’s dick while they chat. He pours his heart out about how much he loves being on the show and JoJo just keeps caressing him and kissing him. GET THE HINT LUKE SHE WANTS TO BANG SO STOP TALKING. JoJo says she’s running out of words to describe the passion between her and Luke but she doesn’t really need words when we see his hand creeping up her skirt, and him grabbing a fistful of her ass plus the fact that she wouldn’t even let him speak without putting her hands in his lap. James uses his alone time with JoJo to bitch about Jordan giving the wrong rules to a card game or something. He goes on a rant about how Jordan’s a celebrity and everyone should bow down to him. Obviously he sounds like a whiny little b. Then he asks to kiss JoJo. I think James’ time has expired on this show. (To be clear I thought that week one but there were bigger fish to fry then ahem, Evan.) Naturally, JoJo immediately tattles to Jordan to ask what’s up with the card game kerfuffle because apparently her suitors live in a nursing home and fight over a game of Uno or something. Jordan says he’s not entitled as JoJo runs her fingers through his luscious locks. What’s great about this season is that we don’t need to guess who JoJo will be bringing to the fantasy suites because she physically can’t keep her hands off them, even when she’s pretending to have a serious conversation about their character. Jordan returns to sit on a tiny couch with James and swishes his white wine spritzer around in his glass at warp speed while everyone else has the uncomfies. Then after his wine has been thoroughly tossed, they have it out on baby couch. Agree to disagree on the rules of Poker, boys. Luke gets rosed.

It Takes Two with Derek and Chase

Professional dancers perform a threesome tango and I’m pretty sure we saw the female dancers’ cooch, which was confirmed when the camera panned to Chase shouting “WHOA” with wide eyes. Must be his first peek at foreign vag. PS I went to a pole dancing class this weekend and the instructor kept saying cooch, so I’m bringing that back real hard. Since JoJo can’t decide who she wants to have relations with, she forces Chase and Derek to dance fight for her. This got me jazzed, imagining Center Stage’s final sassy dance, guessing who would be the one to ride the motorcycle onto the stage (Chase, obviously). Unfortunately, watching them push JoJo back and forth between two inches of space was the most anti-climatic thing I’ve ever had to watch. I kept waiting on the edge of my seat for them to bring down the house. Show us a little canned heat! Wag your finger at the boys when they get too grabby, JoJo! But nope, even though JoJo was wearing a red dress, it was certainly no Cooper-Jody-Charlie sensual showdown. 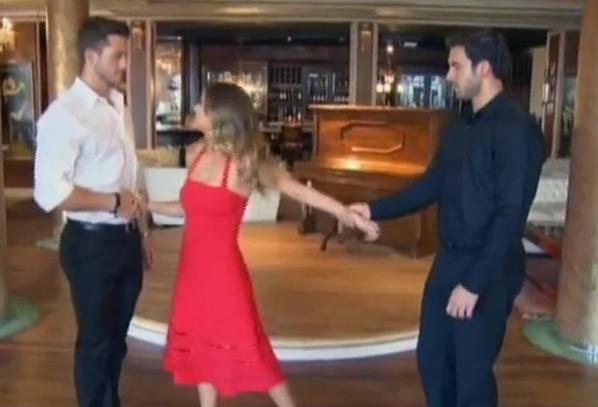 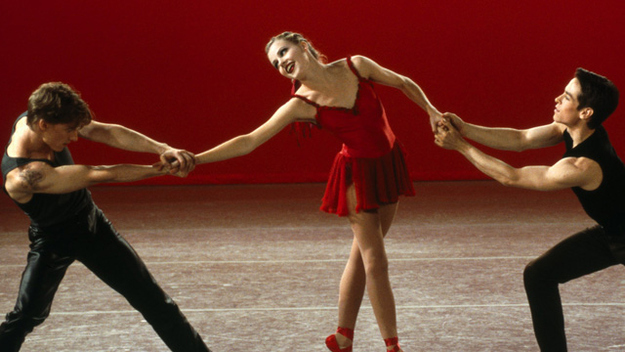 In one on one time, Derek tells JoJo he’s falling for her. On the other hand, Chase gets scolded for not giving JoJo’s feelings validation or reciprocation. Chase gets the rose. Makes sense, right? Derek has a suuuper depressing limo farewell with “I’m Derek and Derek is imperfect” and “WHY am I crying?!” cross-cut with a singer belting “Don’t Cry for Me Argentina” and Chase/JoJo touching all up on each other. Brava for the juxtaposition between Derek’s sopping wet tears and that song. BRAVA.

Jordan takes her aside to say he should win this because he deserves to. JK he says he’s falling for her LIKE EVERYONE ELSE obviously. Alex says he was mad he hasn’t gotten a one on one or a group date rose yet. I’m mad Alex is still on this show.

Luke, Chase, Robbie, Jordan……DRAMATIC EXIT to tell Chris that they both suck and she doesn’t want to give this rose out. YAAASSSSS. BYE James & Alex! Luke & Jordan for the final two. Boooyahhhhh.

Those are all the celebratory words I typed before I realized that she was actually asking Chris for two roses to keep both of those turds around. Alex feels like he has a pity rose and HE’S NOT WRONG. CLEAN IT UP, JOJO. Stop trying to throw us off the scent that your bottom four will be Chase, Robby, Jordan and Luke. Also, turn up your gaydar a notch around Robby. Jus Sayin.