It’s been a couple of weeks but we’re still in Buenos Aires and unfortunately last episode’s bitch rose ceremony wasn’t all a dream and Alex and James still squeaked through with pity roses. Chris Harrison earns his paycheck by stopping by to tell the boys how many dates there will be this week. Good work, Chris. Alex can CTFD because he finally got his one on one. Or in Chases’ words: dude, shut up. Stop bitching. I like Chase. He can kick it for a while.

I Gaucho On My Mind with Alex

On their “road trip” aka cab ride, they have a thumb war (JoJo loves a good thumb war), do Pringles duck lips aaand JoJo says it’s like sharing the backseat with her little brother. She didn’t say little but…come on. She also didn’t outright say brother, but we all knew it. At one point Alex horribly tries to rap and she’s like k let’s play the quiet game.

The boys have to take a bus to wherever it is that they’re going. They get road sodas though, so it’s ok. Robby is wearing white old woman open toed slippers. So he’s really dressed for the ride. Definitely gave him mad street cred when the bros started freestyling about Alex needing a stool to get into a sidecar. OooOoh THIRD DEGREE BURN courtesy of white boys rappin. 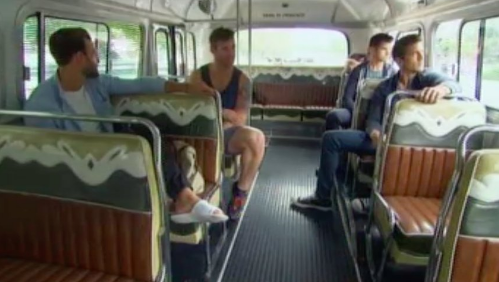 On the date, they arrive at a Spanish word for ranch…at least JoJo thinks that’s what it means. WHERE ARE THE CUE CARDS, GUYS?! I didn’t know what Gauchos actually are but I shot out some T’s and P’s that they weren’t referring to the extra wide stretchy pants that I found approps to wear to Easter dinner with kitten heels in 2007. It turns out, it was worse than I imagined. A gaucho is someone who’s born to stroke horses and maybe sneak a kiss in too.

Producers force Alex to dress the part, as if he’s not still reeling from getting a pity rose. JoJo throws on a pair of suede leggings and calls Alex a “cute little gaucho” and that’s pretty much when I declared it was curtains for Alex. The two lil goocho’s snuggle and make out on top of the horse that has just been stroked and might actually be dead. I wondered how it was that I ended up in the bestiality section of YouJizz. It would be kewl if going forward, JoJo didn’t use a horse as a bed. 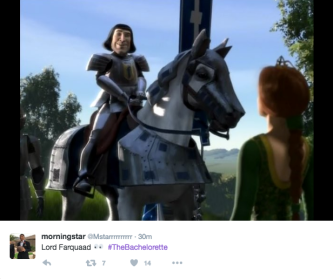 After the horse has been dragged away to the glue factory, Alex tells JoJo that he’s falling in love with her and then adds in that he fell in love with her the second he saw her, which is laying it on real thick. Let’s T it down Alex, you were put on this show to rival Chad and by God’s grace you clung on until now. It was crickets city from JoJo and we all know that we’ve reached the point of no return. She’s not feelin it because she has more chemistry with her brothers than she has with lil Al and feels it’s more respectful to send him home now. Realistically it would’ve been more respectful to all of us if she didn’t ask him to kiss her while lying on a lifeless horse, but who am I to judge. Alex takes it really well. Jk he leaves angry, kind of like how he spent this entire season.

Let’s Toast to Love with Jordan

Jordan gets the romantic wine country date and if it’s not obvious at this point that he’s one half of the bottom two, then we haven’t been watching the same show. They grape stomp but no one falls and screams so it’s actually not entertaining at all. (Had to sneak this in because it still makes me laugh to the point of tears. Sorry not sorry.)

JoJo gets into Jordan’s barrel because she can’t stand to not be touching him at all times. I’m fine with that because I would’ve done the same. What I’m not okay with is when they go ahead and drink each other’s chunky feet grapes. AND THEY LIKED IT. I’m appalled and disgusted until I realize that they probably think it’s wine. If you could make wine just from doing the running man over some grapes, I would turn my kitchen into a G-D vineyard. JoJo was probably like oohhh I’m feelin it, that wine was strong! As she chews on a mushy grape. Feeling the high from those toe jam grapes, they hop into the conveniently placed vineyard hot tub. Jordan wants JoJo to meet his mama. That’s what he’s thinking about as they grind their wet bodies on each other in the hot water.

Later, Jordan brings up double A for the first time this season basically. And it comes out that he doesn’t have a relationship with Aaron, which I’m sure is really good press for his more famous bro to have your family saying you don’t spend any time with them. Cliff notes version: According to Jordan no one talks to Aaron and he’s all sorts of F’ed up after living life in Aaron’s shadow. I wonder if this is why Jordan felt the need to have swoopy hair. ~~Livin in, livin in, livin in the ShAdOw~~

Even though that was some juicy celeb gossip to air all over television, what was more entertaining was the way Jordan introduced the topic by saying, you won’t be meeting my middle brother and JoJo puts on a calm & cool performance of a lifetime with her response, “you mean, Aaron?” Oh IDK, is that his name, JoJo?! Every viewer groans at the thought of no Aaron or Olivia appearances on next week’s hometown visit. Oh yeah, and Jordan says he is “so in love with JoJo.” JoJo’s basically like, samesies.

The weather forecast ruins the date that probably was never planned for the three “other guys”. James Tay stops talking for just enough time to shove 100 french fries in his yapper because that’s how you get girls. I shed a tear for so many wasted fries and had to physically stop myself from doing a McD’s run for some of my own. The rest is an 8th grade slumber party. The only thing missing was a choreographed dance and Bonnebell glitter rollerballs. In truth or dare, Robby’s dared to run the hallway in his undies…YAWN. We saw more skin on Damn Daniel when he stripped to a speedo on night one. James feels threatened by Robby’s Ken doll abs, so he narcs to JoJo about Robby’s wandering eye. It pretty much backfires when James gets the bottom of the bed for their group snuggle.

JoJo asks Robby about his ex who he dated for three years. They broke up over Christmas break, because apparently Robby is still in college. Even though they just broke up like 2 months before filming, he’s totes over it. Chase “really, really likes” JoJo and does want to spend the rest of his life with her. Cause marriage is totes the result of xoxo’ing someone in your aim profile, which is essentially what Chase just declared. James Tay wants to know why it feels like there’s no chemistry between them and JoJo spins a web of lies that’s like you’re really nice and you like me so our relationship is great. What James misses is what she doesn’t say and that’s “I’m not attracted to you.” It’s unfortunate that he misinterprets that and feels so confident because it’s crystal clear that he’s outtie five thou in the next rose ceremony.

The boys debate who will get roses and it turns into a heated argument about how each guy should think they’re a frontrunner or GTFO. I don’t know who deemed Robby the Coach Taylor in this scenario, but I could’ve done without his pre-rose pep talk. Robby the self-proclaimed frontrunner gets the rose and I’m never more turned off than I am when watching him and JoJo smooch. I’ll give him one more week before I riot.

As is typs for her dates with Luke, JoJo is horned up for everything that he does. The way he handles the horses, how he shoots, how he coaches her to shoot, she just can’t. She CANNOT stop soaking her undies. Luke shares that he doesn’t have an LP after this show but he’d like to figure it out with JoJo and she’s all about that because she knows that every Bach alum ends up being paid to make appearances for the rest of their lives, so that works best when someone isn’t tied down to a career. It also opens the door for Luke to become the next Bachelor should he be left hanging in the finale. Wink.Well played, Luke.

Since ABC likes to toe the line (Robby mooned us, LOL OMG) there’s a bonus scene during the credits of a closed door with JoJo moaning on and on about how good that feels. PSYCH GUYS, IT’S JUST HER GETTING A HEAD MASSAGE!! LOLOLOL but seriously though remember when Kaitlyn O’ed with a mic pack still on? Get on her level, JoJo. No more of this Disney play with my hair shit. When the door is closed I expect you to be getting some.