1. David Beckham is the Sexiest Man Alive…and I approve wholeheartedly. 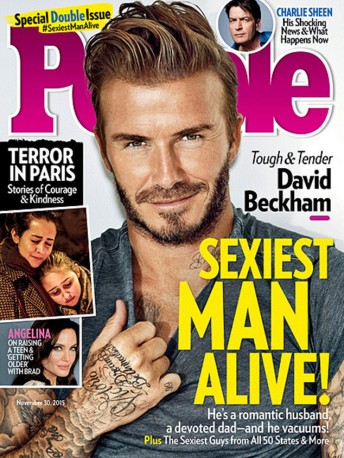 Last year I was fresh on the blog scene and I wrote a scathing disapproval of People’s choice. I stand by it 100% to this day but I have also never hidden my love for Becks and therefore I support him taking the W this year. The Beckham family is legit one of the most attractive families on this earth. The kids won the genetic lottery and David defines DiLF. I’m actually shocked that he hasn’t won the title yet…I can only hope that the people over the past 20 years who never chose him have subsequently been fired for their poor decision making. Anyway, if you want to watch the original unveiling via Jimmy Kimmel and laugh at how long it took his live audience to guess the man, please see below.

2. Charlie Sheen is no longer winning. 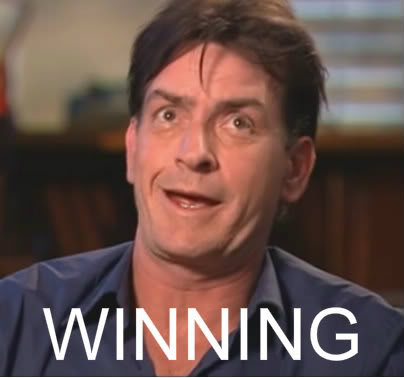 So…yiiiiiikes. Charlie Sheen announced this week on the Today Show that he’s HIV positive. I mean, something tells me that when you publicly go off the rails, bang a bunch of hookers and do a bunch of drugs, you MIGHT catch a waft of the ole HIV. I bet he probably regrets being a real asshole to the world and yapping about how he had tiger blood running through his veins. Hindsight is 20/20. You know what’s bananas? I’ve been doing transcription of interviews about HIV and Hep C and I learned something new. Surprising, right? You probably thought I knew everything. But anyway, you can contract Hep C from sharing a toothbrush. A TOOTHBRUSH.

All this HIV talk has also sent me down memory lane to high school when Dan Davis, HIV positive motivational speaker came to my high school and scared the SHIT out of a bunch of kids whose idea of going crazy was stealing some of mom’s Mike’s Hard Lemonade and swigging them in the basement–not doing intravenous drugs. Obviously times have changed now, but in like 2004, a guy with a ponytail telling you that he could wipe a drop of blood on the seat in front of you and twenty years later someone could touch it and get infected was absolutely terrifying. He scared well. WHAT A DAD. (That very long sidebar was for the benefit of my fellow FM’ers..I also found a very ratchet video, should you want to hear his famous line IRL, FF to 31:36 here )

After 22 seasons, (SHIT!) Joel McHale’s version of The Soup has been cancelled and the last episode will air December 18th. I’ve never actually popped a bag of popcorn and sat down to watch The Soup every Friday (?) night–I’m guessing no one else did either and that’s why it’s getting cancelled, but any time I happened to catch it on TV it was hilarious. There’s something about a network full of Kardashians allowing a man to eviscerate them for how stupid they are that brings a smile to my face. Joel’s mockery of foreign soap operas, The Bachelor, trashy MTV shows and his own network will absolutely be missed. Now that there’s no one to keep E! in check, I’m assuming the Kardashians will buy it.

Santa will be coming early this year in the form of SNL hosts. Ryan Gosling will be hosting on December 5th, allowing us to drool a little extra over him since he’s casually been in hiding since the birth of his child. And the holiday episode right before Christmas on Dec 19th will be hosted by Tina Fey and Amy Poehler. Hallelujah, Christ is born. Obviously this will feature the comeback of many old school SNL peeps because ratings, and I wouldn’t be surprised if JT snuck in there. Jus sayin. Set your DVRs.

5. First look at Ben the Bachelor.

The Bachelor released their trailer for the upcoming season with Ben Higgins, one of the most boring contestants I ever had to watch. He better spice it up for his own season. Although judging from this trailer, it looks like the producers took that job into their hands by delivering him twins. Ew times a thousand, ABC. Be grosser. The 1, 2 debut of identical twins from the limo was so tacky that I half expected Ben to say hubba, hubba. “Group hug?” wasn’t much better. As always I will be recapping the mayhem and possible fantasy suite twin threesome so stay tuned for THAT.

BONUS: They finally turned my life into a movie.