“Don’t worry about your speeches going too long because MTV is the only network that refuses to play music.”-Amy Schumer

Yeah I still watch both the MTV Movie Awards and the VMA’s every year. You wanna mock me for that? Fine. But I’ll have you know that last year this happened: 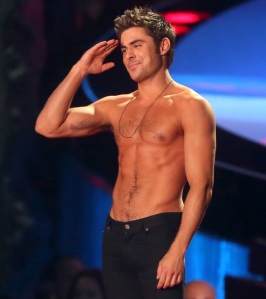 and I saw it go down live. So joke’s on you, really. This year I can’t say that anything that salacious occurred, but that’s why I’m here. To tell you the highlights of a show that’s target audience is pre-teens so that you can never bring it up in front of your co-workers today.

-Amy Schumer as host. Amy is known for being gross, which is obviously why I like her. She didn’t really get to shine that much on this show but her opening montage of intruding all the big movie scenes from this year plus her monologue kicked off the show and there was an especially disgusting sketch about girls going to the movies alone to DJ (this is a metaphor for something inapprops.) Props to her for keeping her crass humor alive throughout the show.

-While introducing Magic Mike XXL cast, Amy talked about solving the California drought then said, “These four presenters are doing their part by making it rain in my spanx.” A+

– JLo calls out the Magic Mike boys for a dance number and Channing shakes that AZZZZ.

-Miles Teller presents the Trailblazer award to Shailene Woodley and doesn’t even read a speech, just genuinely talks about how phenomenal she is as a person and it’s real adorbsies. Interestingly, not once is her breakout role in the critically acclaimed Secret Life of the American Teenager on ABC Family mentioned. SHE SHOULD HAVE WON ALL THE AWARDS FOR HER ROLE AS AMY JERGENS, the fifteen year old who didn’t even know she had sex and then 9 months later had a son who miraculously never learned to talk over the course of like 6 seasons. Jus sayin. 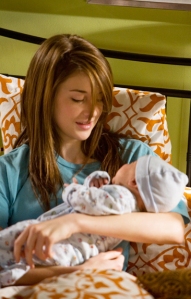 -Pitch Perfect 90’s Hip Hop Riff-Off exclusive clip. Is it May yet? (Could’ve easily done without Rebel strutting out in a bedazzled bra, leather pants and angel wings…but let it slide because that’s just Fat Patricia. Bonus points for calling her lady curtains a “girl power” and not a kitty—see below)

-Kevin Hart the butt of all short people jokes brings his kids up to accept the Comedic Genius award and says that everything he does is for them and it’s supes cutes and then him and his son do a Parent Trap style handshake that MTV deems unimportant and moves the camera off of.

-Vin Diesel presenting an award and then serenading the crowd awkwardly? Was this for Paul Walker? I was perplexed because he said the name Pablo. Someone pls clarify for me.

-Apparently Fall Out Boy lives on in present day and not just in my 8th Grade Angst mix because they performed with a rapper that I still never caught the name of and it doesn’t matter anyway because the whole time he was rapping Pete Wentz was lurking next to him trying to steal the spotlight. Punk meets Rap. Kewl, MTV. Update: the rapper’s name is Fetty Wap. What planet am I on? 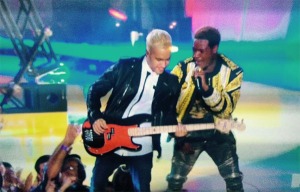 -Zac Efron and Dave Franco accepted best Duo in character from Neighbors and literally just quoted their own movie and reenacted scenes. There wasn’t enough abs and these two proved they could never be part of an improv club like Michael Scott.

-Reese Witherspoon and Sofia Vergara do a bit about how they make out sometimes and hey you two, the men of America don’t need played out girl on girl cliches to have wet dreams about Sofia Vergara.

-Shailene and Ansel win for best kiss and Ansel isn’t even there. Hey guys act like you’ve heard of MTV before…the fans only vote for the two that they want to see mack it up onstage. What a buzzzkillllll. Even worse, Shailene says, “If you’ve ever wondered what it’s like to kiss your brother, it’s kinda great.” To erase this memory I give you the best MTV Movie Best Kiss acceptance of ALL TIME:

-An entire performance called Drop That Kitty with far too many cat references to vaginas. The uncomfortable police were called several times to shield my eyes and my ears from this. 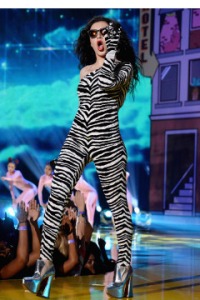 -John Green accepts the award for The Fault in Our Stars, admits he had nothing to do with the making of the movie, loses his chill for several minutes and tugs at his hair a lot then doesn’t let the actual director or producers of the film speak and also forgets to thank them. Solid effort.

Female Performance- Shailene Woodley, The Fault in Our Stars

Movie of the Year- The Fault in Our Stars

Zac Efron and the cast of 'Magic Mike XXL' in the same room and neither is shirtless. Nothing makes sense. #MTVMovieAwards #MovieAwards @MTV

Obviously everyone knows that the stars aligned and Taylor Swift turned 25 on 12/13/14 and coincidentally threw the banger of the century with celeb crowds better than any awards show. (Mostly because Snapchat forced everyone to know, making a cat cartoon filter for every picture snapped on this holy day.) Everybody who is ANYBODY was at Tay’s party, as evident in the slur of photos below that gave me a real outrageous amount of FOMO on Saturday morning. The biggest shocker wasn’t the fact that Mr. King of Pop JT graced this little shindig with his presence but The King and Queen themselves also showed up. WHAT is that you say? The two most anti-social, royal subjects of Hollywood settled and hob-nobbed with T Swift and a bunch of commoners for her 25th? I was just as shocked as you, obviously. 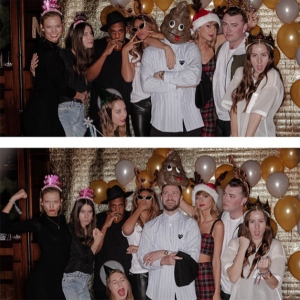 Since this happened over the weekend while everyone was enjoying their regular normal people activities I was going to let it slide without a specific blog…but then JT had his Brooklyn concert last night and the popular crowd reunited and I just couldn’t stand by and watch this silently for one more second. It appears that Queen B and her man didn’t just show up to Taylor’s party as a charity write-off…Bey and Tay are now besties who dance togets at JT concerts. These two have united and prepare yourself for a slaying because no one knows what could happen next. A secret joint release? A music video with dorky vs. queen twerk-offs? Tay babysitting Blue? The sky is the limit people–brace yourselves for a takeover.