Breaking news: Juan Pablo is married. Are we supposed to care about that? It was literally straight crickets when Chris Harrison felt it was necessary to pop off the finale with that announcement. Wasn’t he like the most hated bachelor ever? Not to mention there are no pictures, no exclusive interview, nothing. From one fellow scoopee to another, if you’re going to share news that no one gives a shit about, at least jazz it up with a pic. Hot start to wasting our time.

In a SUPRISING AND DRAMATIC twist, Rachel has to watch the finale live with Chris Harrison and a studio audience then face the rejects. Clearly grasping at straws for anything they can do at this point to spice up the final three excruciating hours of this season. Unfortunately rather than this being spicy, it basically just means that we watch Rachel tell us about her feelings and reflect on each experience on the show, then the camera cuts to Rachel telling us about her feelings and reflecting on each experience. BUT IT’S LIVE! Spoiler alert: Rachel still thinks each moment was “tough”. At least she looks like a babe soda.

Back in Rioja, Spain…

Rachel and Peter decide that since they’re both falling in love they should just pretend the engagement disagreement never happened. Peter gets the key to her vagina for the night. Good choice, Rachel. I approve.

Rachel and Bryan take horses through the vineyard and stare at each other a lot. Later he tells her how much he loves her and is in love with her forever and ever. He gets the booty card. The next morning he says, “We’re back on track, the chemistry is hotter than ever.” We get it, you boned.

Rachel makes a speech about how she didn’t come here for a boyfriend, she wants that proposal. ***Laser focused on Peter**** It’s all for nothing though because she says goodbye to Eric. GURL. Why even make that speech? She tells Eric that she loves him but she’s not in love. It’s weird how I almost called Bryan and Peter as bottom two in like…the second week. OH WAIT I DID.

Over in fluffland at the Hollywood studio, Eric comes onstage and he’s like super graceful and thankful for the experience and not bitter at all. SOMEONE is looking for that Bachelor spot. The rest of the conversation between him and Rachel is completely forgettable, at best. What’s not forgettable is his new facial hair that is doing things for America. We see you, Eric. 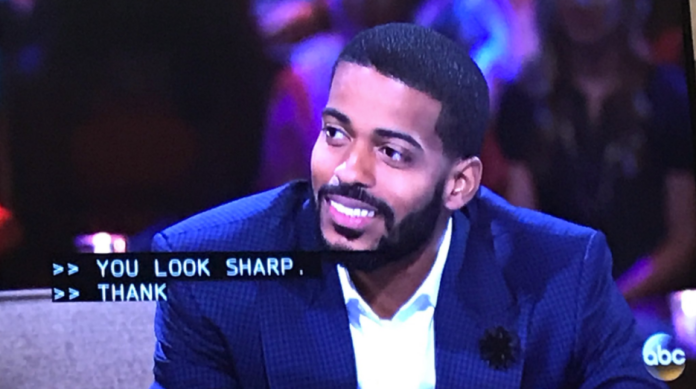 The two make out in the sky and later Bryan gives Rachel a Spanish dictionary called “Bryan and Rachel’s Spanish Dictionary.” Basically he took a Spanish dictionary and put a piece of computer paper over the top of it like a book sock and wrote wife, husband, forever and “Big Rach” in the front cover. Hey Bryan, if you want her to pick you, maybe don’t call her Grande Rach. Like ever.

They go to church to scare Peter further about marriage. Just kidding, they talk about saints and shit. Then that sly motherfucker of a monk is like will you become…how you say…married? And Rachel is like NOPE. Yeah this date will help things along. Peter is just wondering “about life, love, and everything in between.” And THAT is what we call scripted reality TV. I don’t care how much we all crush on Peter (A LOT), there’s no way he came up with that on his own. He then lists all the experiences he wants to have with Rachel like paint n sip and the farmers market. Yes, that’s called dating.

Later, he says he knows he’s in love and sees forever with Rachel but he’s not ready to propose. They repeat the same argument and both stand strongly in opposition. Peter’s like fine, I’ll propose if that means we can be together. And Rachel is like if you don’t want to, don’t do it. SHE WANTS HIM TO WANT TO PROPOSE. Could this be a more typical argument? Anyway, I think I blacked out for a little bit because I just figured they’d work their way through this and suddenly they’re kissing goodbye and Peter is ripping his JCrew sweater off to sob into it. Mmmm, muscles.

Chris Harrison rudely interrupts this to call it a breakup. I don’t know if I was just being naive but I 1000% thought they were just like let’s sleep on this and that Peter was going to bounce back the next day. I almost cried my eyelashes off with this jarring realization that they’re dunzo. (And my eyelashes are real…not to brag.) Peter makes an appearance in the hot seat and to say it’s pReTtY awkward would be the understatement of the century. I guess when I blacked out Peter was like you’re going to have a mediocre life without me. Kinda bitter but like Rachel sass handing him and telling him she’s living her best life was also unnecessary. GIRL DON’T YOU TALK TO PETER LIKE THAT.  Since Peter will obviously want that Bach nod, Rachel declares this process isn’t for him in attempts to curbstomp that dream. Rachel is literally every woman ever after a shitty breakup. I’M LIVING MY BEST LIFE BUT YOU DATE OTHER PEOPLE ON TV AND I’LL CUT YOU. PS let’s not gloss over the fact that Peter says he walked by Rachel’s crusty lashes stuck to the floor for two days, and thought about what he’d done. #ROMANCE. But seriously, clean those up. That’s disgusting.

PS do you think Bryan is about to hang himself by the curtains backstage listening to this? He could not more clearly be the last resort choice.

Back to the show–Rachel feels like she’s rushing it with Bryan after she loses Peter. BECAUSE SHE’S STILL IN LOooOVE WITH PETER and WISHES HE WOULD PROPOSE TRALALAAAAAA. During the proposal that was given away basically at the top of this three hour pile of steaming garbage, Bryan repeats the dumb Spanish line he said the first night…to bring it full circle. Then he also creepily says their first kiss was like a chemistry bomb exploded. Aaand apparently we’re also bringing it full circle to Bryan being gross. Rachel is like my heart is confused but I love you so much and I see my future in you. Yep this is everlasting love, folks. Also: pear shaped ring. Wuph. 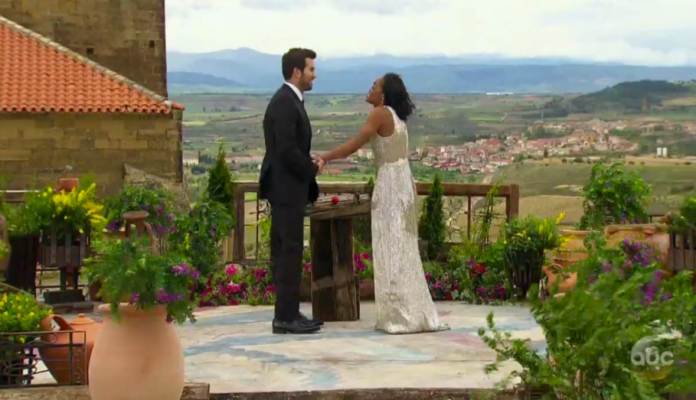 During the “After Show”, Bryan re-proposes to further remind us why we all hate him and they tongue smash each other onstage mere inches away from Chris Harrison. HOW CAN HE JUST SIT THERE AND WITNESS THAT WITHOUT TOSSING HIS COOKIES?! The couple that everyone definitely hates is considering moving to LA. WOW what a shocker. Rachel says, “We just want to live a normal life and get to know each other and spend time together.” Cough cough, EXACTLY WHAT PETER WANTED. Whatevz. Enjoy your month of press before your inevitable breakup, guys. You deserve nothing but the best.

*Editors Note: If the next season of this show is as unwatchable as these past two have been I’m officially declaring myself #done with this franchise. I’ve given it a fair chance. You hear this ABC? Clean it up or The Salty Ju is OUT.