Becca’s family has made it to the Maldives and she can’t wait to ask them to pick her future husband because she loves them both and can’t decide. Her family gets the Garrett sneak preview that he’s been married before. Tough room to walk into when the only info they’re fed is that he’s already done the damn thing. Garrett makes a super vague toast about Becca’s dead dad. Just say you wish you could’ve met her dad rather than make a long-winded cringe worthy announcement that not everyone could be there in person. Then Garrett literally full on sobs to each member of Becca’s family and it gives me all the uncomfies. When Becca’s sister (who I wouldn’t have known was her sister unless they kept captioning it) tells her how emosh Garrett is, she’s like oh he’s never cried in front of me. Seems like a weird time to pull the waterworks if your future wife hasn’t even seen you shed a tear yet, but whatevs.

Becca then tells her family to treat Blake like they did Garrett. Nothing like telling your family how to act around the guy that’s obviously not going to win! Blake’s looking like a trendy lil snack in his pink shorts and matching bouquet. Too bad he’s about to get his heart crushed. He says he’s excited a billion times like he’s having a Tourrette’s episode. The nervous energy is palpable. When Blake sits down with the sis, he uses the CLASSIC interview tip to bide time, saying great question when Becca’s sister interrogates him like she’s hiring him to be her brother in law. I’ve been doing a few interviews lately and I also use that tactic. Except when I say great question that’s usually my answer because great question universally means you stumped me and I’m too stupid to form a coherent answer here, thank you for your time. Becca’s sister is Team Blake and says he would challenge her and be more of a teammate. Becca bursts into tears, so it’s obvious where this is going. Becca’s mom is already comforting Blake like you’ll be fine if she doesn’t pick you. MOM SIXTH SENSE. Not a great start to the ‘sode for your boy Blake.

Becca’s family is like sucks that you have to make this decision, best of luck to ya. Becca asks what her dad would think and her mom’s like he’d want you to be happy. NO SHIT.

Becca’s last date with Garrett is on a yacht and they talk about how lucky they are and stop all serious conversation to squeal over dolphins swimming by. Ugh we get it you’re happy and lucky and everything’s peachy on your free trip to the Maldives. Later Garrett and Becca talk about how they touched all night at their slumber party.

Becca’s legs send mixed signals her on her last date with Blake. She wrapped her legs around both SO HOW WILL WE KNOW WHO SHE CHOOSES?! Blake says they constantly challenge each other, which makes it very obvious now that it’s been said 10 times about their relationship that the producer has fed them this phrase. Blake gives her a homemade time capsule of their time together. YOIKES.

Back in the studio, Chris Harrison is here to tell us that what we are about to see, he HAS NEVER SEEN ANYTHING LIKE THIS, GUYS. PREPARE YOURSELVES. Spoiler alert: Becca dumps Blake and he leaves. Nothing out of the ordinary, just like every single finale. I would ask how this MF’er Chris Harrison sleeps at night feeding us such bullshit lies to try and up the dramatics but I already know the answer to that. He’s rich and famous AF.

Anyway, Becca allows Blake to go to the proposal spot and give his whole speech and Becca looks nothing short of uncomfy throughout the whole thing. Then Becca takes over and basically only speaks in past tense. She says she pictured this moment with him the whole time, which is a real dick thing to say to someone who’s not getting the moment. Not only is the guy getting his heart stomped on but also he has to do it in a full suit in the tropical heat, roasting like a giant sweaty pig. Everyone cries, or just like, sweats from their eyes, who knows.

Cut to Chris Harrison live in the studio with Blake, torturing him for our entertainment. I HOPE YOU FEEL GOOD ABOUT THIS, CHRIS. Blake obviously is having a hard time but felt reassured that their love was real from watching this season back. Nothing notable happens with him and Becca onstage, except for Chris Harrison awkwardly pointing out his “support system.” Hey cameras, pan over there and show that Blake has people here for him so he doesn’t off himself: 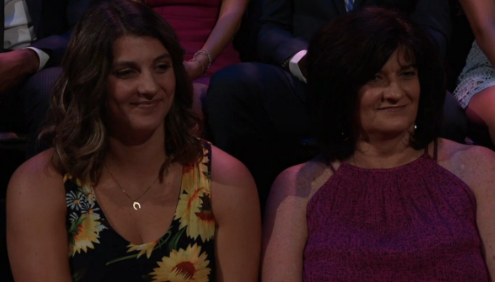 He just is genuinely sad and heartbroken and wants Becca to be happy. I’m gonna go on the record and say that Blake is not the next Bachelor.

IRL, Chris Harrison asks when Garrett knew Becca was the one and he answered “Yeah.” Sweet. They’re sooo happy and in love and Garrett’s sorry for being offensive on Instagram and OF COURSE THEY’RE MOVING TO LA. Chris Harrison surprises them with a 1980’s minivan and Garrett says let’s do the damn thing. KILL ME FOREVER RIGHT NOW. THE END.

PS if you want a good chuckle, look up Garrett’s wedding photos from his last marriage. BECCA 1.0, YO. The two women could be identical twins. K, byeeeeeeeeeeee.