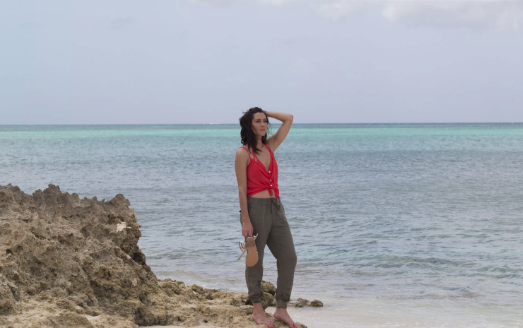 Becca wants to move to the Bahamas. Becca is all of us. Except for the part where she gets paid to go there and mack a bunch of dudes. In the Chris and Becca weekly gab sesh; Becca declares that she wants no drama this week. Something tells me there will be drama. Chris Harrison does a dumb analogy about Las Vegas and betting even though they’re in the Bahamas and he asks Becca to bet on the outcome of this journey. She bets she’ll be engaged. No shit.

Becca drops in on the boys and requests hugs from all like she’s picking up her kids from school at the end of the day. She announces that there will be four dates and no rose ceremony so BUCKLE UP. Colton’s up first, which gives the remaining butthurt bruhs plenty of time to talk shit about the Coltmaster being a virgin and how he should go home. Meanwhile, Becca drools all over Colton’s body for like a solid amount of time. Girl needs that D. I don’t think I’ve ever seen a female openly slobber that hard in Bachelorette history. Just when Colton’s going to confess to his chastity ring, a Bahamian wearing a white crop top cut like a paper snowflake you used to make for your bedroom window, interrupted to send them diving for conches, which HILARIOUSLY sounds like COCKS. 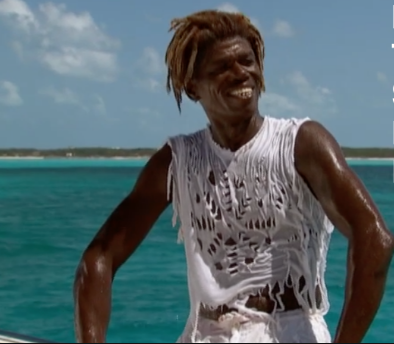 A bunch of terrible sexual innuendos follow. It pains me to think that whoever writes these scripts actually thinks these are funny. LOLOL Colton’s a virgin so let’s have the two of them make some cock jokes and slurp something as an “aphrodisiac”.

FINALLY, Colton spills the beans about his lack of sexual activity. Becca appears to not take the virg news so well by saying, “REALLY?!” then excusing herself for a second to fake cry about it (?) When she returns (offering no explanation as to why she ran away) he talks about how hard it was being an athlete and a virgin. Boohoo. He wants his virginity to be a gift for someone. Becca wants to accept that gift so she gives him a rose. If I were Colton I’d be like wait a minute you just made me feel like a piece of trash by walking away when I confessed something embarrassing so I don’t want that rose. But Colton is dumb and so is this show. Also not for nothing but I’d stay woke on this whole virginity thing. Colton’s got charm and I wouldn’t be surprised if it’s not 1 hundo percent true.

Love is in the Air with Garrett

They fly over the islands and Garrett is annoying. I’m sorry. I just really don’t like the guy. And I’m willing to bet he wins too. They make out a lot on a private beach and fornicate on a tree swing. Later, Becca toasts him and says thanks for a great day, I have fun with you and Garrett replies you’re really good at that. What’s she good at, Garrett? Forming sentences? Turns out the last girl who met his family was his ex-wife and he hasn’t really dated since then. Becca is like we’ve had the same romantic history basically and roses him.

You Make My Heart Skip a Beat with Blake

HOT start to this date with the return of the Baha Men’s greatest hit Who Let the Dogs Out….who.who.who.who. Oh apparently they’ve got a new song! WHAT ARE THE CHANCES? Blake and Becca dance awkwardly as only white people can to island music with that much flavor. If we’re being honest this new beat’s got nothing on a song comparing letting dogs loose to the start of a party. I am hashtag grateful that the Baha Men were able to come out of retirement for this d list free concert for TV. WHAT HAVE THESE CRAZY GUYS BEEN UP TO FOR THE PAST 15 YEARS?! 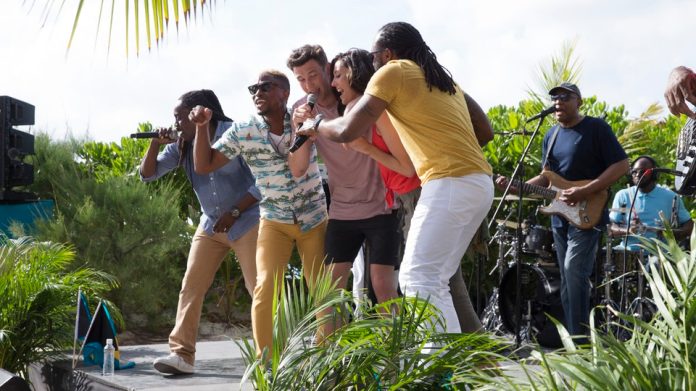 Anyway, Blake opens up about his mom having an affair with his bball coach when he was in high school. YIKES. Reminds me of that show Life As We Know It, which obviously got cancelled, but starred early 00’s babe sodas Missy Peregrym and Sean Faris. Spoiler alert: he finds his mom sleeping with his hockey coach in like the first episode. Then DRAMA ensues. Anyway, look it up. That show is 1 trillion times better than this one. It also had a PRETTY steamy teacher student affair. Dirty stuff for primetime TV. Jus sayin. Anyway, Blake is in love with Becca and I’m pretty sure he was the first to say it. OBVIOUSLY he gets the rose and Becca admits to us that she’s also in love with him and sees him as her husband. Took it one step to far Bex, don’t get ahead of yourself here with 4 guys left.

These Days Are Never Easy with Wills, Leo and Jason

The guys run at Becca who is wearing an all denim whoutfit. Who has been dressing her this season? Because I’ve had enough. There’s never a need to wear matching white shorts and denim jacket with white sneakers. Thankfully the jacket is ditched for a friendly game of beach volleyball with the whole gang. She’s having a blasty blast but we all know how this is going to go. She’s friend zoned Wills and Leo and Syracuse.com spoiled a home visit with Jason roughly 4 months ago. Leo says he feels behind on the relationship front, and Becca spins the breakup making it sound like it was his fault for being honest. Goodbye you beautiful man bun. At night, Becca gets frustrated with asshole Coach Bombay for not opening up and telling her he’s falling for her like everyone else has. He feeds her some bullshit about being hurt before. Wills wears the hell out of a Hawaiian shirt. Wish he could’ve come to my Hawaiian themed birthday party. Him and the Baha Men. Could’ve been a real rager. Wills gets sent home but we know he won’t be lonely for long because he’s adorable and dresses well and is super sweet and oh ok as I was typing this sentence it was announced he’ll be on paradise of course. NEXT WEEK: HOMETOWNS and more Colton/Tia drama that no one saw coming except everyone did because there’s clearly more to that story. TOLD YOU TO STAY WOKE ON COLTON, GUYS.