GET MY NAME OUTCHA MOUF. Okay we’re all caught up from two weeks ago. We pick up at the rose ceremony again where Eric is shouting at everyone and stuff. Lee interrupted Kenny and hovered like a real creep so that he could tell her his grandpa got cancer and gift Rachel with a block of wood. The other guys confuse the word quirk and cork. Classic mix-up. Kenny and Lee argue about how they’re no longer boys because boys don’t interrupt each other to give their girl a stray block from life-size Jenga. Rachel overhears and excuses herself to go cry because there’s too much pressure on her. (Ahem, as the first black bachelorette.) She’s #done with this shit. And as everyone knows, when the bachelorette has a breakdown and clicks her heels three times, Chris Harrison will appear to make it all better. Or he’ll just gather the gang to tell them that Rachel is hella mad and wants to start sending bitches home, STAT. I think we can all agree that cocktail hour went on long enough anyway.

Our Love is About to Take Off with Dean

Rachel and the boys head to Hilton Head Island down in South Carolina. Number one vacation spot for bougie families with small children. Cue the commercial with drone shots of the beaches and quaint southern buildings. THIS IS THE PERFECT PLACE TO FALL IN LOOOOOVEEE. Or ride in a minivan for 14 hours with your siblings and cousins to visit during school spring break. Either way, either way’s fine. Anywho, Dean is afraid of heights and apparently is SHOCKED that a date called “our love is about to take off” includes flying. COME ON, DEAN. They cruise around in a blimp because Rachel used to call blimps, “bimps”. I guess? I don’t know. I didn’t even know people could ride in a blimp. What’s romantic about charging through the sky in a chode shaped Goodyear advertisement? Nothing, I tell you. They fly the blimp by the hotel to brag. Total douche move. Eric obv takes it personally. Later on, Dean talks about his mom dying of cancer and it’s literally heartbreaking. Like why is it necessary to have these talks? He talks about his mom telling him she wouldn’t be coming home and I think I speak for everyone when I say I was choking back sobs. He gets a rose. They hit up a Russell Dickerson concert. Whoever that is. JK I’ll stop being a dick. His song was actually really good. Dean and Rachel slow dance and make out in front of everyone, duh!

Rachel invites everyone on a yacht to embarrass themselves, essentially. The boys pop their tops off and immediately form a dance circle like Get Low just came on at the 8th grade dance. This awkward take turns doing shitty dance moves quickly morphs into a little rap sesh. Peter raps and it makes me want to cringe away forever and die. Suddenly, we go from a Diddy music video to a spelling bee hosted by Chris Harrison and judged by preteen girls. What a spin move. 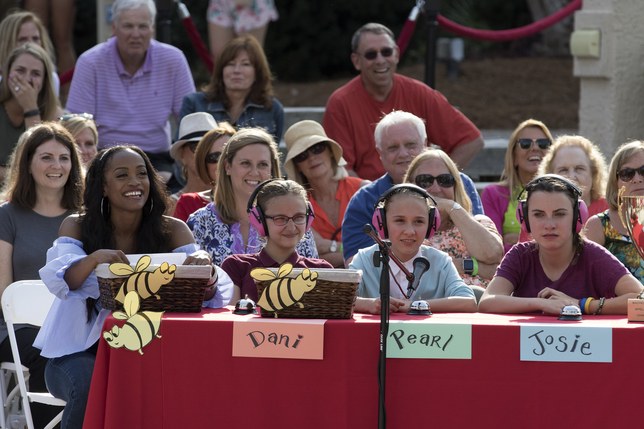 Apparently Rachel wants someone who can pop their pecs AND spell dirty words because the first word is squirt. SERIOUSLY?! On what planet has anyone ever said that they like a squirt of lime in their tequila? A SQUIRT? Props to Rachel for being far more mature than I will ever be (it’s not that hard) reading that sentence with a straight face. Kenny tells everyone he’s ready to show he has brains then promptly spells champagne wrong. Lolerz. “PHYSDE” is how Eric spelled Façade. Let that sink in. Josiah is the champ and his second to last word was stunning so clearly this whole thing was a downright scam. Stunning is round 1 shit. ROUND ONE. I should know, I won my 4th grade spelling bee, nbd but HBD, yo. I was a much more graceful winner than Josiah. As in, I didn’t tongue my trophy in front of everyone.

At the after party, Josiah drinks out of his trophy like the giant wiener that he is. Peter and Rachel talk about if they would move for each other and conveniently Rachel is licensed to practice law in Wisconsin. Hmmmm. Interesting. Iggy uses his Rachel time to say that Josiah isn’t real. Cause Iggy was put on this show to narc on everyone else and call it “being protective.” He immediately tells Josiah and everyone is like hey Iggy, you’re a big tattletale and no one likes you. The Lee vs. Kenny thang continues when Rachel asks each of them what happened and Lee lies like the capital R racist that he is. This shit is to be continued, natch and next week is two episodes of garbage instead of your regular scheduled programming of just one. Don’t you dare let the previews fool you into thinking that Kenny gets punched though. I’ve fallen for that trick one too many times and I’m putting my foot ALL THE WAY DOWN. ALL THE WAY. Every single season they flash some injury and tease a fight that never happens and I drink that kool aid like nobody’s biz. Well, not this year. After Carly’s fake black eye and the mirage of Chad throwing torsos in the pool, I’m OUT. Kenny either gets this injury from an activity or causes it himself because I REFUSE to step into the OBVIOUS trap that Lee the honkey can ever get a right hook on Kenny the pro wrestler that would cause that much damage. But damnit I’ll be popping a bag of popcorn in case I’m wrong. I’m like never wrong though. Honestly.