We return to the couch of shame…Shawn asks Kaitlyn if she’s in love with him. Apparently he thinks it’s the Shawn show, and basically it is for me, but I guess other people might see this as a little egocentric. Shawn, bubby, baby, this is a scripted show and she has to give roses to other guys sometimes, otherwise your storyline would be demoted to the credits each week like Britt and Brady…because two people dating is not quality TV. Kaitlyn tells Shawnie to make a decision and he decides that they should mack it up on the couch. Good decision, Shawn. Bravo!

Meanwhile, Tanner, the town gossip and US Weekly’s #1 subscriber, talks shit with Nick about Shawn. Tanner rubs his palms together and cannot WAIT to see what happens when he pits Shawn and Nick against each other for his own entertainment, I cannot WAIT until Tanner gets eliminated without anyone really knowing who he is.

I’m not going to lie to you all, I shamelessly anticipated this date with glee once I saw that she was taking the boys on a boat ride to a remote island, knowing that eventually one would be left there. Visions of the Badlands and Dum Dum Soules flying off in a helicopter, leaving Kardashley and Kelsey to throw sand at each other clouded my head. These thoughts were soon interrupted by the most snoooooozeworthy two on one date EVER. Joe the Slow tells Kaitlyn he’s falling in love with her and she’s one in a million and seals it with several passionate smooches. Kaitlyn is blown away, either by Joe’s feels or the gusty winds on the cliff they’re hanging out on, not sure which one.

“Today’s the biggest day of my recent life.”-JJ

JJ uses his time with Kaitlyn to bare his soul and confesses that he cheated on his wife three years ago BUT he’s learned his lesson because he lost everything and lives in his parents basement now. Let’s lay this out in clearer terms…JJ the douchenozzle former investment banker cheated on his wife when she had a newborn but he’s sars! Kaitlyn’s first response is that cheating is her worst fear in a relationship and we already know that JJ the slime ball will be thinking about what he did on those cliffs in just a few short moments. Kaitlyn sends JJ home to “be with his daughter” which is code for “I’d prefer not to marry someone who will be getting his rocks off elsewhere while my vagina is still healing from pushing out our child.” Kaitlyn tells Joe she needs more time to fall in love with him, aka JJ just bought Joe another week, tops. They continue the date while JJ continues to mourn the loss of Cliff and now Kaitlyn too.

Joe comes back and tells everyone his date was great and they “spent some time on the couch together.” Ok Nick 2.0, calm down. Joe confesses to his bros-in-waiting that he’s falling in love with her and everyone giggles and fans themselves and Shawn storms out like a drama King who can’t stop blabbering about how Kaitlyn told him off camera that he’s the one. Shawn rolls up to Kaitlyn’s hotel room AGAIN and she has a meltdown that he’s found out about her extracurriculars with Nick and while she’s hyperventilating Shawn is like “Sup?” To be clear, Shawn still has no idea that she allowed Nick to ‘trate her, he’s still whining about the fact that she told him that he was the one. Pretty boy still doesn’t understand how the show works and Kaitlyn has to reiterate that she will have multiple boyfs until the very last episode. I’m scared for Shawn finding out about Nick. Real scared (read: excited.) Kaitlyn says last week (off-camera) was a mistake because clearly now Shawn is clingy AF and she regrets reassuring him much more than she regrets her mic’ed up romp with Nick in Dublin.

Kaitlyn starts off by making a speech about mistakes and obviously all of the insecure baby bitches immediately assume they are the mistake. Nick is like I don’t know if you guys noticed but I have a rose and I’m STILL really nervous. I think I speak for all of the contesticles when I say,STFU, Nick. Ben H. sits with Kaitlyn by the fire and tells her he’s super jelly belly about whatever it was that Kaitlyn said to Shawn when she snuck down to see the two of them and he regretfully had to take a shower. Seriously, Ben H.? You couldn’t have waited until she left to shower? I’m guessing Kaitlyn will never again ham it up without cameras…she cries her way out of this one, naturally. Side note: now that I watch UnREAL and basically know everything there is to know about filming this show, I know for a fact that there would always be someone on call with a camera so exactly how did this “several hours” of off camera bizz go down? Especially considering that she had sex with a mic pack on? HMMMM….seems suspicious.

Anyway, back to the cocktail party, Nick’s like hey remember how I was inside of you? We’re still Gucci, right? And Kaitlyn is like yeah as long as you don’t blab to everyone (like when you ratted Andi out), snitches get stitches. Nick tells Kaitlyn not to worry because he didn’t tell anyone it was intimate or special when that is literally EXACTLY what he told the bros-in-waiting the next morning. Then Nick cries but I don’t really know why. I guess he’s scared she’s going to chuck him when she finds out Shawn is better in bed? I don’t know. Go to speech therapy, Nick. Please. Especially if you’re going to make TV dating your career.

Shawn stares at the fire with a strong drink in his hand, swirling the dark liquor around as he recalls watching fireworks from a canoe with Kaitlyn wrapped warmly in his embrace. (See, Chris Harrison, I too, could write a romance novel.) He’s taking the broody girlfriend bit a little too far, if you ask me. Show us those washboard abs! Soap opera music soundtracks his chat with Kaitlyn where they both say they made mistakes and use a lot of clichés like bump in the road and taking a step back. I never thought I would say this but their time togets is beginning to get exhausting. There needs to be some lovin soon or I’m going to be forced to bring my Team Shawn flag to half mast in mourning.

BenZ (thank God we only have one Ben now) and Tanner are dunzo, Tanner will probably start a blog about the show and BenZ tries to convince us he can’t find a girlfriend. Also he mentions his dead mom again.

Kaitlyn sucks at driving, they took a bunch of selfies, kiss the blarney stone and I still want to punch Jared square in the dome.

C.Harrison interrupts our countdown to Cupcake’s tears by sitting down for some good ole fashioned real talk with Kaitlyn. Kaitlyn confesses that she regrets every single thing that she’s done on and off camera, basically and Chris replies with “That’s good.” Interesting form of psychoanalysis there. He then suggests switching things up so that the guys who haven’t gotten bone time will have the opportunity to level the playing field (if you know what I mean) before hometown visits. Chris, you perv, you, telling Kaitlyn to get after it! I support this wholeheartedly.

Cupcake One on One @ Cliffs of Moher

Kaitlyn dons a sassy pony and takes Cupcake on a helicopter ride around Ireland and to the Cliffs of Moher. They talk about their futures and Kaitlyn keeps referring to this process as finding her “forever”, which I think is cute that she’s still thinking her final rose relationship will last more than a year, tops. Shit gets real, real quick when Cupcake goes all therapy on Kaitlyn, puts his face entirely too close to hers and asks how she’s doing. Kaitlyn cries and says, “This is the hardest thing for me in this moment.” A new rating scale for how hard things are, moment by moment. My mind is blown by just how hard things can be. In the end, Kaitlyn tells Chris she doesn’t see herself marrying someone who drove up in a candy corn cupcake and she leaves him to sob and contemplate suicide on the cliffs.

After seeing these tears teased for two hours I was prepared for disappointment when they actually happened. But I was NOT disappointed. The dramatic waterfall of tears and hiccupping sobs coming out of Cupcake’s body were SO WORTH IT. He hides his ugly cry face in a scarf and tells himself to pull it together. IT WAS GOLD. Such sadness coming from such white teeth…sorry Cupcake, at least you’ve kick started your career on Broadway! 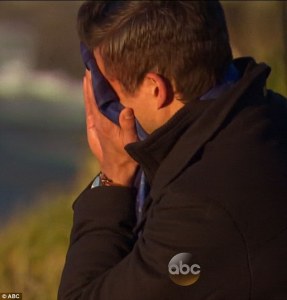 On a final note, try as they might, the editors of The Bachelorette did their best work to show reaction after reaction that we are to assume is about Nick and Kaitlyn’s tryst but I would like to reiterate that for yet another week literally no one knows anything about the porking that occurred in Dublin and I can only imagine the floodgates that will open after they do the big reveal…if EVER. Seriously, Kaitlyn, just tell them…for all of us.