We’ve made it to a whole new decade and yet we still have Ryan Seacrest asking Gwyneth Paltrow in the most long-winded and roundabout way, what snacks she has in her pantry. Don’t believe everyone’s Facebook status about how much they’ve changed in the last decade, because we as a human race are truly not evolving. By the way, Gwyneth loves healthy snacks. EYE. ROLL. Here’s the breakdown of what everyone wore to the first awards show of the sequel to the roaring twenties and find out if I hated it or not. 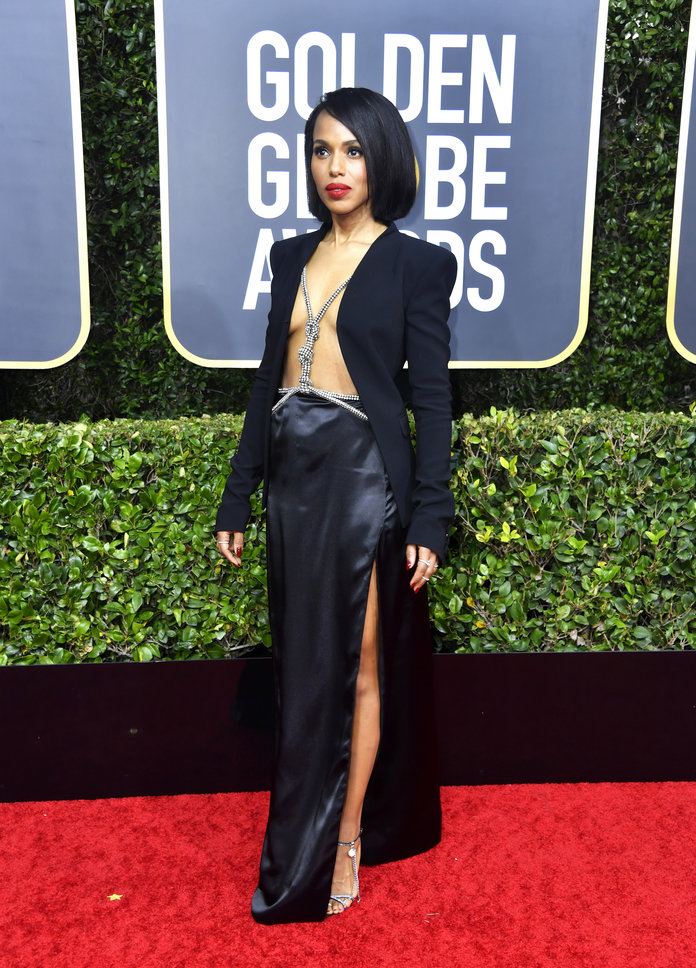 This is a different size than the rest because this B waltzed out on my TV and my jaw dropped, I said “holy shit!” and immediately googled a picture of her look so I could include it in this blog. WHY YA GOTTA HAVE YOUR BITS OUT?! Like what is the point of this outfit.

This is A LOT. Not in a GREAT way. 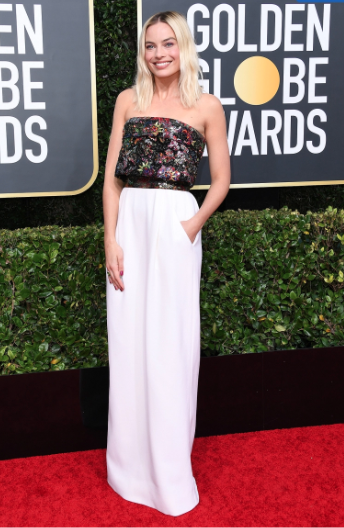 Listen this could’ve gone either way but I wasn’t overwhelmingly in love with it and I decided after staring at it for an abnormally long period of time and confirming that it wasn’t a jumpsuit that it should’ve been a jumpsuit. I would’ve liked it 900 times more if it was pants. What can I say, I just have an eye for style. (I’ve worn men’s fleece pj pants for the past 48 hours.) 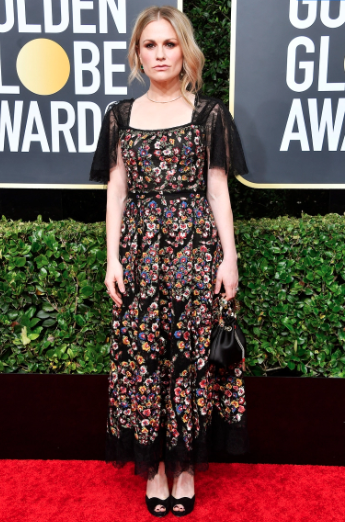 In case you haven’t been paying attention, grandma’s embroidered flowers was a HEAVY theme for the night. I DON’T LIKE IT ONE BIT. 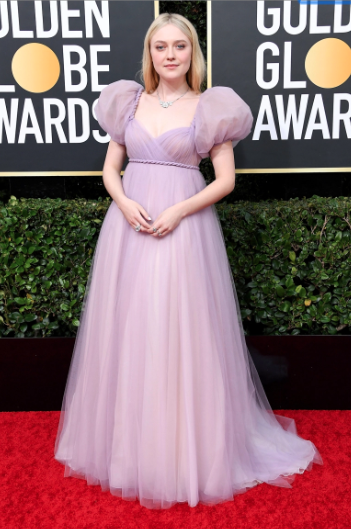 I’m down for a princess dress but this is like childhood dress-up gown and/or Wendy from Peter Pan’s night gown. It’s those damn puff sleeves.

Appreciate the fashion risk but can’t get down with anything that gives me a headache just from looking at it and also is the shape of a vulva.

Kristin, it’s the Golden Globes, wear something nicer than you would wear to a Laguna Beach black and white party in a hotel. This is like barely a step up from when they all wore Forever 21 minis to prom.

I know everyone is all about slobbering over Greta because she makes trendy feminist movies and stuff but this dress is boring and unflattering. The top panel literally blends in with her skin tone. BOOoOOOOOOOooOO. 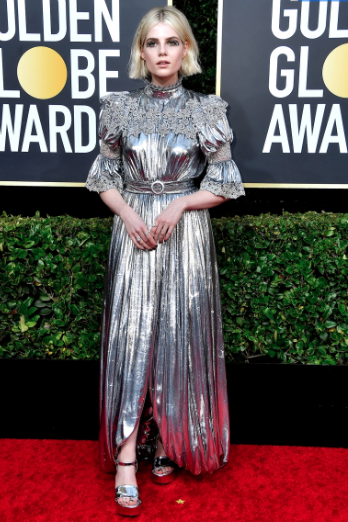 This is a shitty bridesmaid dress in cotton candy flavor. 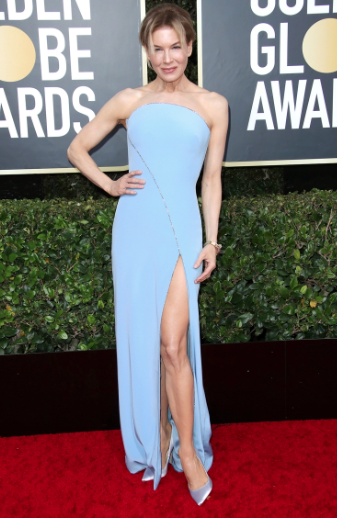 Full send back to 1998 with the pointy heels, basic strapless and PIECES OF HAIRS HANGING IN HER FACE FROM HER UPDO. Story time: in college I went to a hot teacher themed ROTC party and as I got ready with my fake glasses and a white button down showing my skanky bra, I pulled my hair up in a clip and grabbed my front pieces to pull out and my roommate literally looked over our bunk beds and goes WHAT ARE YOU DOING? And that was for a theme party. Tough stuff, lesson learned. Pieces in the front is a hard no. (Update: after winning and having Renee tell the crowd with a very unmoving face that it’s been 17 years since she’s been there, this outfit makes complete sense.)

On what planet is this a gown and not a Moroccan beach coverup?

It’s hilarious to me that she was rumored to be dating the cyst on Bachelor nation–Nick Viall and then she steps out with Bill Hader. Could not be more opposite. Doesn’t matter who she’s dating though because Victorian mixup is doing nothing for her red carpet look. Kills me to do this after putting out a blog solely devoted to slobbering over her but WHAT FRESH HELL IS THIS JLO?! ARE YOU A PRESENT?! Two things you should’ve done instead of tying a giant bow all over your body: 1. Coming in a giant fur coat with a sparkly dress underneath in character as Ramona from Hustlers. 2. Saying F it and going OG Jenny wearing a juicy suit and name plate hoops. Take notes for the Oscars.

Remember the critically-acclaimed movie Holes based on the novel that you read in middle school? Cate is dressed as one of the deadly yellow spotted lizards that lived in the holes.

What’s the deal (Jerry Seinfeld voice) with these side pocket things on each side? Is it like red carpet pop-a-shot? Are they trash cans? Are they pockets? Leftovers from an oversized butt bow? Someone pls advise. 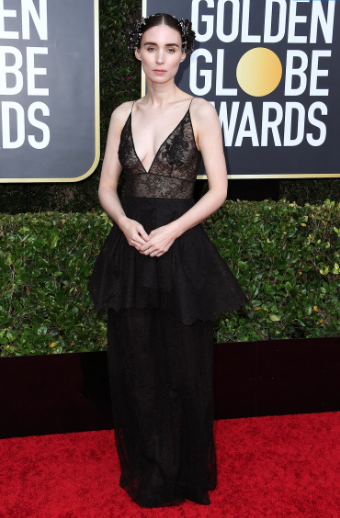 Welp this will give me nightmares foreva. 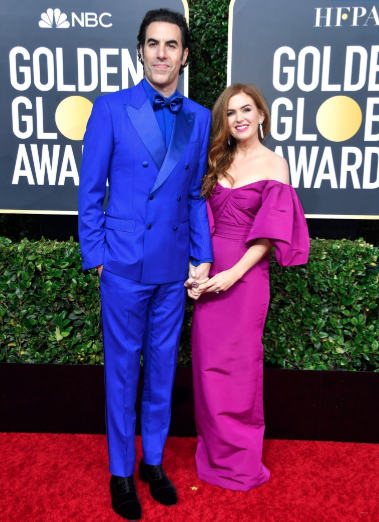 Just because it’s these two, I have a sneaking suspicion they did this on purpose but AH, MY EYES!

Green and yellow should never ever ever ever be mixed together on a satin dress unless you want your dress to look like snot.

This has got some very Vegas show girl vibes to it. Love the color, not so into the style or wet hair deal.

Sparkly and flattering, a theme for almost everything I like. 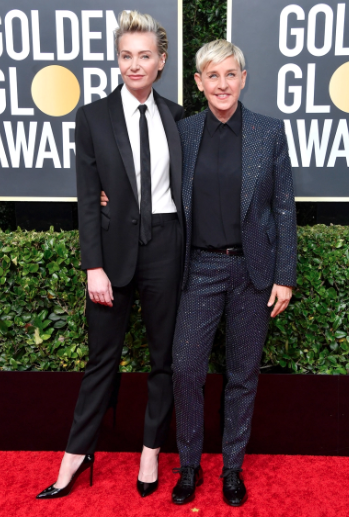 Power suit couple, but with a little SPARKLE!

Dunno who this is but she’s wearing this dress like a glove and that shouldn’t go unnoticed.

I’ve quietly ignored Billy’s extra red carpet looks for a while now and this one spoke to me. Probably because it wasn’t suuuuuper in your face but it still slaps.

Both of them look like a coupla dimes. Lauren Graham is crushing the red bombshell lewk.

Luhh dis girlie and soft thing Dunst has going on. 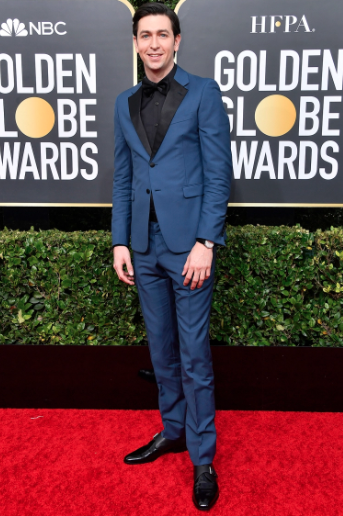 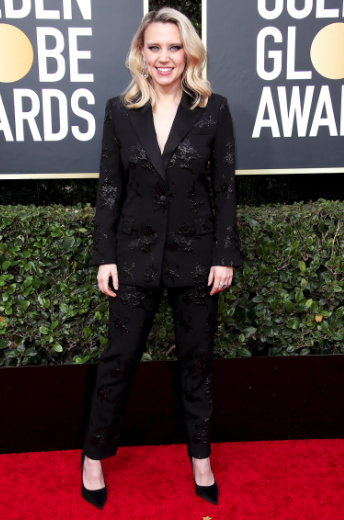 She intro’ed Ellen’s W so oBVIOUSLY they had to twin it out. I’m loving these glitzy fitted suits. I need one for myself to wear to the absolutely 0 places I go nowadays.

I HATE PUFFY SLEEVES BUT DAMN IT DO I LOVE A BOLD YELLOW. The hint of blue sparkle is the cherry on top of my golden dreamz. 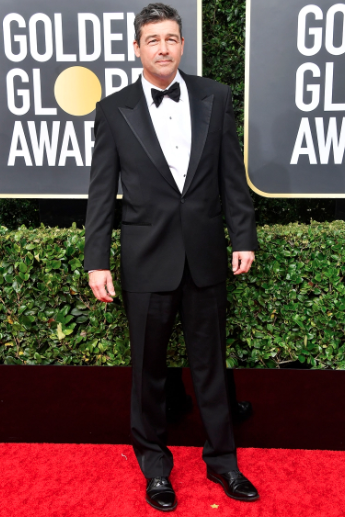 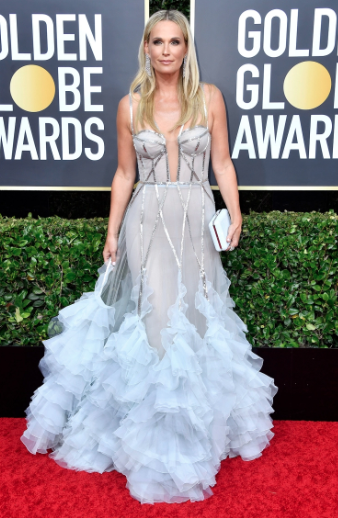 It took me a little bit too long to figure out who this was because it’s so strange to see her as a blonde, which I’m sure is her natural color. Mrs. Maisel looks so amahzing in every scene of the show with her 9 million outfit changes and matching hat/purse that it’s kind of hard to stand up to that on the red carpet and I wanted to be blown away. This is a rambling way to say that this is a nice purple gown but I wanted more outta her. 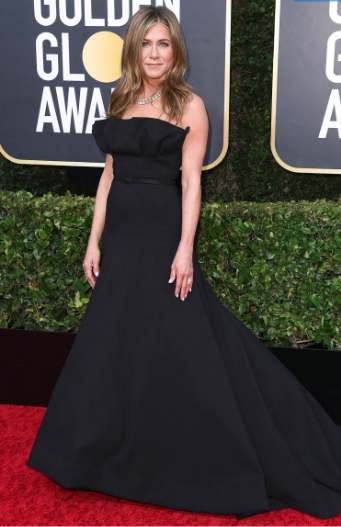 99.9% sure Amy wore this exact dress last year to an awards show but hey it works.

Helen can GET IT. 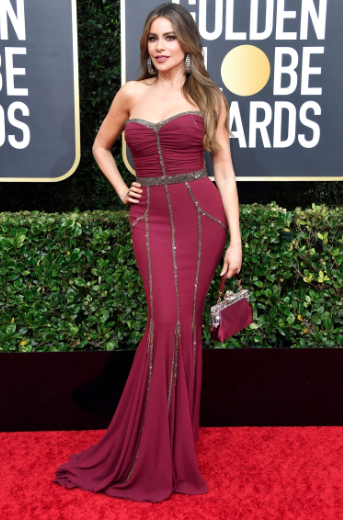 Looks great but also I would be remiss if I didn’t pose this question (as my mom and I both analyzed while she presented) did she get a boob reduction? Because those puppies are usually front and center (Selma Hayek style) and they’re looking drastically low key here. It’s like slapping God in the face. 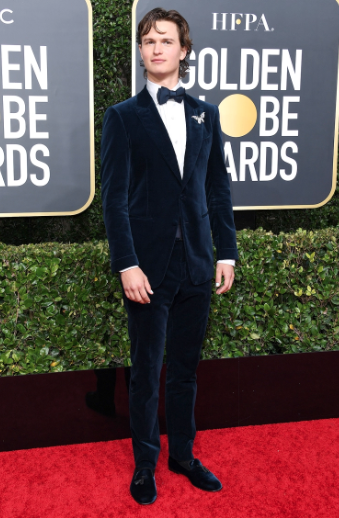 SPARKLE POCKETS AND IT’S PAST TEN PM SO NOW I’M JUST SHOUTING THINGS I LIKE.

I am VERY into this Blair Waldorf braided headband situation. 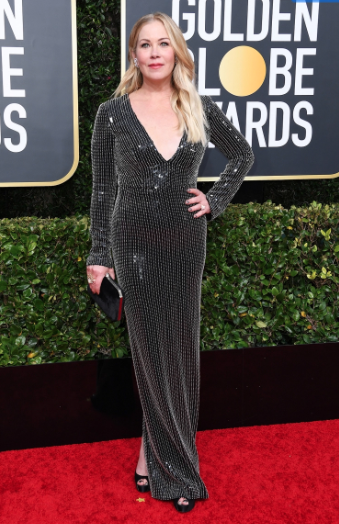 Simply sparkling, is there any other kind? (this is only funny to the 1% of people who know what Simply Dusty is)

Laura Dern is killllllin it lately.

Apparently Rita Wilson’s hair and makeup person ghosted her. It looks like she managed to pull her shit together because her and Tom look like the belles of the ball. That cheetah dress is Babetown, USA.

Reese is another Jen Aniston. Probably why they ended up working together and being besties this year. Plain Jane but crushes it every time.

A very close second to my favorite look of the night. Hair, makeup, dress, everything on point. 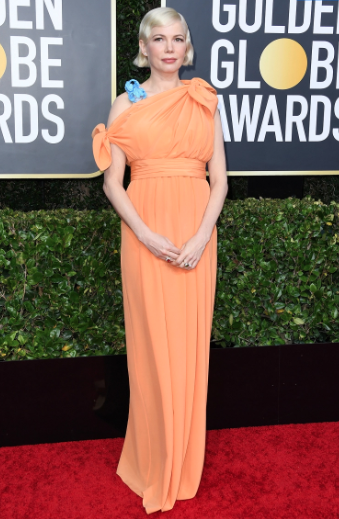 Here’s a circumstance where I don’t know what the hell is happening with this dress and various top ties and yet I lOoOoOOoooOove the color of it.

Ray looks like he just tossed on a suit to go to his daughter’s dance recital or something and it’s adorable and I love it. Just happy to be there.

Was not expecting a Tay appearance as I was surfing through red carpet pics and boy was I pleasantly surprised. Bold flowers but a great dress.

This looked even better when she strutted onstage–perfect fit and classic.

This was my bold choice of the evening. It’s much more geometric than I’m used to but I really dig it. She even tied the circle from the top of the dress in with her shoes and you know I love a good match. 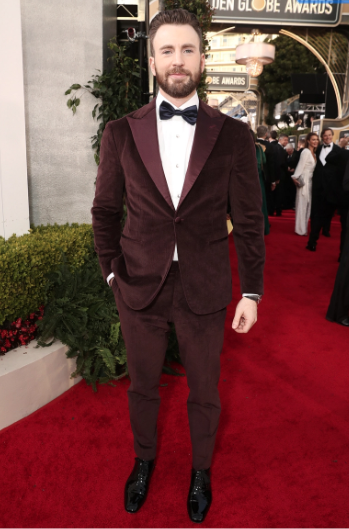 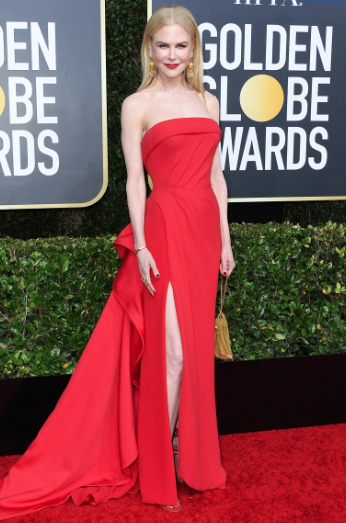 Even though these two have about enough chemistry as a couple slices of plain white toast, at least they are visually pleasing. I added an extra picture of Priyanka’s dress because DAAAAAAYUMMNNN. 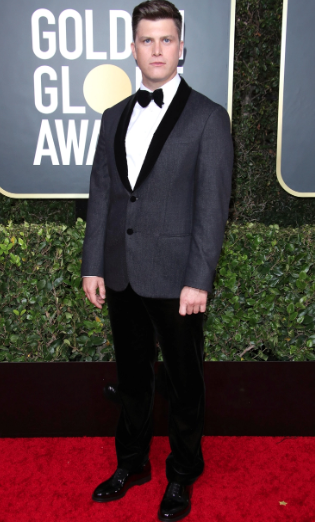 FAVE LOOK OF THE NIGHT:

Another bold choice for me (am I becoming more fashion savvy?!) but I saw this dress on the red carpet while Ryan Seacrest was pretending he was besties with everyone & then I saw it again when Charlize crapped her pants giving Tom Hanks his award. Like literally she went down in the middle of his speech and I thought she may never come back up. And both times I was mesmerized by this dress. It photographs a lot more pukey green than it looked on screen but I love how bold it is and I’m all in on the peekaboo corset underneath. TASTEFUL CHEST-AGE, SALMA. Also the choker ties it all in nicely. I recently asked my mom if chokers are out of style now as I held three in my hand that I haven’t worn since 2017 and she told me her first graders are still wearing them, which swiftly answered that question for me but Charlize just brought them back.