Now that we’ve been blessed with one “to be continued”, we will start off with rose ceremonies for the rest of the season and end with the dumbest three words a TV show could end with. Obviously this will be continued, we’ll see you same time, same place next week, ABC. You’re not building tension. Especially, when we’re back to watching Corinne sleep while everyone talks shit about her. She “sleeps” with a serial killer smile, probably dreaming of Raquel wiping her buhhole for her. 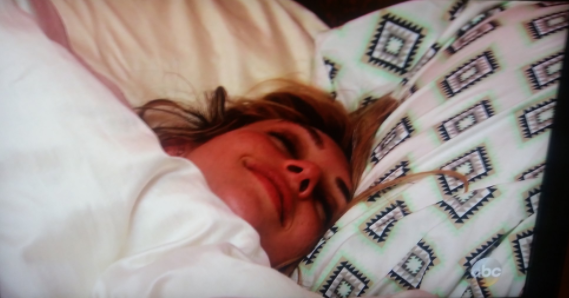 Nick “I wear a hoodie to a pool party” Viall is still getting a dose of real talk from Vanessa (who if it’s not obvious, is too good for this show #feminism, #womensmarch). Nick tells Vanessa he gives an F what she thinks but wants her to be more patient with Corinne, specifically until hometowns when he can determine whether picking Corinne comes with unlimited amounts of Raquel’s cheese pasta. Sarah and Taylor crawl into Corinne’s bed to wake her up from her nappie and aggressively tell her to pull it together. This is really well accepted, Corinne apologizes, and everyone braids each other’s hair. Just kitten. Corinne throws a grade A bitchface, then uses her confessional to shout YOU DO YOU and IMMA DO ME a bunch of times. Don’t cross Corinne or she turns into a G, apparently. (After she’s had a full 12 hours of rest of course. Wiping the sleepies out of her eyes during the rose ceremony this week was a liiiiitttle much.)

As the ladies reassure each other that they’re there because Nick sees a future with *each* of them, Chris Harrison enters with some riveting travel news. The girls are about to globetrot, first (probably only) stop: Milwaukee, Wisconsin. They all react like they’re going to Paris. Which is cute, and also sad. On the Nick front—there’s nothing quite like bringing 15 girls that you know nothing about to meet your parents! Chris and Mary Viall are nervous for their whiny bitch of a son embarrassing himself on TV again. His parents cry and talk about how much they love each other so in turn, Nick cries. It’s a real mess in Milwaukee.

While Nick snots it up with mom and dad, the gals feed some ducks because what else do you do in Wisconsin? Danielle L. gets plucked for a date and the leftovers debate jumping in the pond to drown themselves amongst the ducks. Did I mention how much I love when the bachelor picks a date in person?! So much insecurity, so little time. Anyway, FUN story about Nick, he once jumped in a river for 12 bucks! OMG he’s SO edgy. The hometown deli that conveniently greets Nick as if this was his second home makes “Nick-erdoodle” cookies of Nick’s face. He asks if he gets to eat himself. Gross, Nick. Clean it up. Danielle & Nickerdoodle smush their face cookies and then smush actual faces. But then DRAMA, while strolling through downtown N&D “accidentally” run into one of Nick’s exes who totally didn’t sign a waiver and mic up to be on camera for this bit or anything. Amber the ex has nothing but great things to say about Nick because producers are framing Nick as a good guy now, duh. His good guy façade is tested later on when Danielle goes full on tits out for the boys. Damn, girl. Even though I can barely focus on anything other than her near nip slip, she confesses that her parents have been divorced since she was 17. Not only that, but Danielle slyly adds in “so it’s been ten years” to really hammer home the point that she’s not a child bride like 90% of the contestants this season (FOR A THIRTY SIX YEAR OLD) and I respect the hell out of it. Danielle’s ok in my book. She’s a grown up and a total babe. She gets rosed, cause boobs PLUS the final surprise of more slow grind dancing onstage at a concert, this time to Chris Lane. Kind of a downgrade from BSB, tbh.

The entire remaining cast except Raven walk up to Nick breast feeding bottle feeding a baby cow, as if this is business as usual. He’s about as country as “Farmer” Chris was when he did pushups on hay bales. The premise of this date is that the girls have to work on a farm because the farm industry is declining and labor ain’t cheap. Also, if you recall the highly esteemed show The Simple Life, watching privileged girls bale hay and shovel shit is entertaining AF.

Josephine chose her brightest white pants and Corinne sits on a rock in the field—because she lost circulation in her hands whilst digging poop. SHE ALMOST HAD TO GO TO THE HOSPITAL. I bet the hospital has prime napping beds, jus sayin. Jaimi’s good at milking the cow; because of course the lez knows her way around a nipple.

After everyone has showered, gotten a blowout, a full face of makeup and put on their tightest dress to show Nick that they can be a farm girl AND a vixen…it’s time to gang up on Corinne. Ya girl Corinne goes from full-on Gloria in Wedding Crashers to telling all the girls to stop talking shit about her and say it to her face. And, they did.

Sarah asks Corinne if she thinks she’s ready to marry a 36-year-old man. Valid question but like, Corinne is being groomed for Paradise and everybody knows it. She can parade around a fake engagement ring on insta all she wants but she’s already got a ticket to the sex island this summer. Then Kristina and Corinne get in a fight but I’m not really sure what it was about because I straight up don’t understand a word that falls out of Kristina’s mouth. What I do know is that this disagreement occurred while Corinne was sitting on a lifeless Josephine covered in a red blanket on the couch. Kristina got the rose but Josephine deserves all the roses for somehow still being on this show AND contributing more to a conversation just by passing away on a couch.

Let’s Kick It with Raven

Nick suddenly transforms into a soccer coach for little sis Bella and her team. He just wants to have a regular engaged couple Saturday with the fam and see if Raven can hang. I just want Raven’s accent to change so my ears stop bleeding every time she speaks. Speaking of that beautiful accent, she uses it to ask Nick’s parents if they had to spank him a lot growing up. What an approps first question for your boyfriend’s parents. Typs soccer game fodder. Raven is a keeper. Bella approves as they bond over blue icee’s at Skateland. Bella’s going to watch this back in 5 years, see that monster blue mouth of hers and be mortified. Kind of like Nick should be for bringing his pre-teen sister on the same show he’s had sex on, twice. Nick and Raven skate it up like a couple of pros. Props to Raven for being that coordinated (and not puking on their date). Later on, Raven paints a Lifetime original movie picture of the time she walked in on her DOCTOR boyfriend cheating on her with a bar slut. Even though it came out…real….sloooowww…I was on the edge of my couch in anticipation during this tall tale. She KICKED the door down and administered a STILLETTO head beating! If “I Know What Her Vagina Looks Like” isn’t released within the year with a terribly cast Raven-lookalike, I will be THE MOST disappointed in Lifetime. Either way, Raven gets a rose because she had to see her boyfriend thrusting over another girl. They sk8 it out.

Taylor is a lurking asshole who WENT TO JOHNS HOPKINS and is “emotionally” smarter than Corinne.

Josephine and Corinne basically sit on each other’s laps talking about Taylor and shoving apps in their snackholes at rapid speed. It’s easily the best scene of the night watching these two hungry bitches motor through the passed hors d’oeuvres. I haven’t seen dedication to grazing like that since Chad met his lunchmeats.