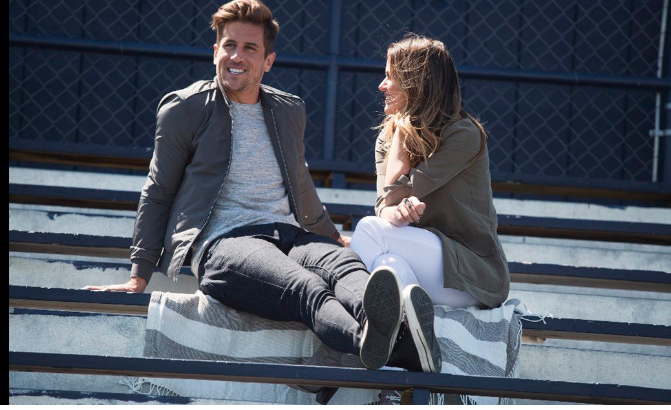 “I know that Aaron won’t be there, but I’m excited to meet everyone else.”-The greatest lie ever told.

It’s time to hit up those hometowns and see how JoJo will adapt her style to each part of the country and what sibling will say something inapprops…spoiler alert: it won’t be THAT famous footballer. But first, let’s check in with Chase who’s managed to cling on to his spot in the final four despite lacking a personality. Looks are everything.

Chase and JoJo chitchat on a rock in the picturesque mountains about Chase’s parents and their messy divorce. It’s tough for Chase to talk about but JoJo rewards him with some tongue. The parents have to meet JoJo separately (in the same house?) so they don’t kill each other, Lifetime movie style. Chase goes on and on about how his dad wasn’t around much growing up but as soon as he sees him, he’s all up in his shit and tells dear old dad that he wants to be just like him. Hey Chase,

Then he asks how to not get divorced and kicks JoJo out so he can have a catch with his dad or something. If you thought that was touching then I’ll fix that real quick with an inspirational quote courtesy of Chases’ mom. It goes a little something like, “If you’re not having fun then you just need to have fun…cause…” Gr8 point. JoJo couldn’t agree more though because she wants to be gal pals with Chase’s mom SAH bad. The feeling is mutche because the mom gives JoJo a rave review—cause JoJo loves dogs and hates fish. WIFEY MATERIAL. Chase talks about how hard it is to say I love you since the big D (divorce, ya pervs), which makes it that much more cringeworthy when he FINALLY tells JoJo because we know he ain’t winnin. Also Chase and his mom cry a lot—which totes isn’t their style but now it is because they just did it on national TV.

JoJo’s never heard of Chico, California but they have DEER! I thought I was watching Kaitlyn flap away from a bird in terror until I figured out those were JoJo’s flailing arms of glee just because some deer were playing in a park. Jordan takes her back to his high school where he obviously was the kewl and popular football player. They make out in the library and JoJo groans a lot. It seems particularly inappropriate until Jordan leads her to what I assume is an athletic office or football locker room covered from wall to wall in old pictures of high school football players. Look, I’m not not hinting at chomo vibes but I feel like in general we should all be more concerned about this shrine to football players past, featuring all the Rodgers bros. JoJo’s like oh, look your brother (he who shall not be named) and Jordan’s like k let’s go, date’s over. Jk he wasn’t that dramats but he did refuse to discuss it. JoJo tables it until she can approach every member of the family regarding the forgotten (yet most famous) Rodgers bruh.

Once JoJo meets the entire fam (but not REALLY the entire fam), Jordan’s mom, who could easily be a massage therapist with that soothing voice, tells stories of how Jordan was the spicy child who threatened to run away when he was little. What kid hasn’t threatened to run away? I did once and my parents were like cool, it’ll save us some money, good luck ya little turd. Anyway, JoJo hammers Luke about the Aaron sitch and Luke won’t speak of their brother that is dead to them either. Such a dramatic group. More importantly, what’s the best way to take the frontrunner with the fluffy hair down a peg or two? Show a pic of him as a serial killer.

In summary: Aaron may not have been there physically, but JoJo made sure his presence was felt by the NUMBER of times she dropped his name. Also, she still has doubts that Jordan is a playyyaaaaaa and won’t want forever. Double also: Luke is trying to have the same hair as Jordan. Sucks2Suck Aaron, you’re not in the Rodgers swoopy hair club, YOU LOSER.

Ugh. Robby’s still here. They take a carriage ride and every time Robby speaks I want to shut my ears off. JoJo is concerned that she’s just filling the void of his ex-girlfriend who he dropped like a month before filming. Burn city from Robby though shitting on his ex and saying he hasn’t thought about his relationship or missed her once. Woof.

Robby and JoJo walk into the house like they’re f’ing Mr & Mrs Claus with the number of gifts they’re holding. No wonder every cousin, friend or neighbor Robby has ever spoken to is there. Then Robby the frozen Ken doll turns melodramatic real quick. You know how much sleep Robby’s gotten? 0. You know how many panic attacks he’s had? A LOT GUYS. A LOT. JoJo tells his mom that she’s falling in love with him, which is stupid. Since Robby’s entire existence on this show revolves around his ex-GF, his mom breaks the news that there are rumors he dumped her for the show. Robby runs in to tell JoJo what APPARENTLY happened. I wish I was drinking wine instead of crushing a bowl of ice cream because I would’ve been so drunk off of the apparently drinking game. JoJo obviously freaks the F out because she was already worried about this. Robby reassures her that it’s all lies all while managing to trash Hope again by saying their relationship was over 9 months before it really ended. JoJo forgives him or whatever. 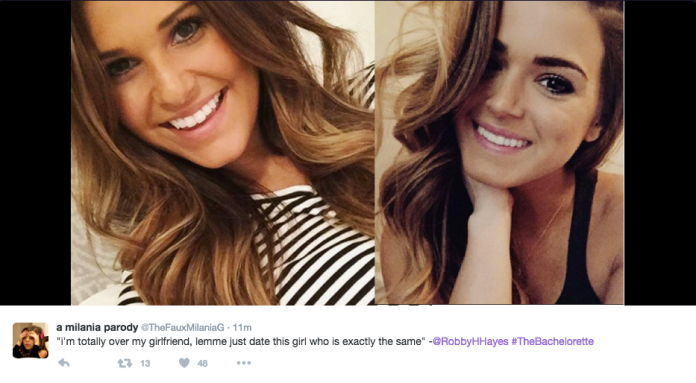 JoJo is wearing cutoffs and cowboy boots for her return to her roots, or a basic bitch country concert. Either way I think we can all agree that Texas JoJo is the hottest JoJo. Even Luke keeps bringing up how her outfit makes his pants tight…which could be awkward considering that he surprised JoJo by throwing a backyard hootinannny with 50 of his closest friends. JoJo really jacks up her southern drawl because Texas Forever. Luke’s sister is a smokeshow, fist bumps to the Pell parents for creating that gene pool.

And then the real movie begins. Luke pulls JoJo away to tell her that he wants their future together. “I want us” he drawls as he pulls her in for a deep kiss while the sun sets on the farm. Is this a G-D scene from The Longest Ride? Interns set up a walkway of candles to a flower heart so that Luke can have his movie magic moment for when he tells JoJo that he’s falling in love with her. There’s not a dry pair of undies in the world. Except apparently for JoJo’s as she declares at the rose ceremony that Luke’s gotta go. WHAT?! Are we missing something?! That Texas hunk must’ve gotten a producer tip that he’s on the chopping block and pulls JoJo aside right away to tell her he loves her. Well played, bro.

JoJo then has a Grade A bachelorette meltdown (in a dress fit for a Vegas ice dancer) because now she doesn’t know who to send home. WHO IS GOING TO BE A GOOD HUSBAND? WHAT IF SHE MAKES THE WRONG DECISION? She just DOESN’T know!!! I know! Pick Luke, you big idiot. He’s a southern gent who lives in the same state as you and hasn’t said one wrong thing this entire season. Don’t be a moron. But of course we’ll have to wait until next week to find out THE BIG DECISION of who will be gettin’ some in a Sandals resort suite. Big ups for whoever decided to give us a double whammy next week  with sex on Monday night and Chad on Tuesday night. That better make up for this to be continued garbage.