“Hey you hurt our feelings, we’re a bunch of butthurt dudes…”

There’s a blazin limo in the bach driveway but have no fear because JoJo hops out of a fire truck dressed as a slutty firefighter in a skin tight white tank and gives everyone boners, free of charge. The competition is how to be a firefighter and Grant, the real life firefighter probably will be a natural at this. Wells the radio DJ, not so much. He may know All-4-One but he can’t play with hoses. It’s rock bottom for him when the instructor demands that he get some water in front of the rest of the guys. YIKES. That’s like when my gym teacher used to call me out for walking the mile. Shamed for days. Wells finally has to lie down for a little while because the water wasn’t healing his near death experience. It’s then when I have my AHA moment. JoJo comes over to him and suddenly he’s cured just from being touching distance from those knockers. It’s an open and shut case of Wells pulling the Squints drowning for a Wendy Peffercorn smooch. I see you, Wells. (He later wins a pity rose for this performance.) Snake it till you make it, bro. If you’ll recall, Squints and Wendy went on to have 9 kids. Back to the competition, Grant wins it, as he should. If he didn’t win this game, he 100% should’ve changed career paths. PS how many MF’ing fire puns can we fit in one date? Answer: all of them. 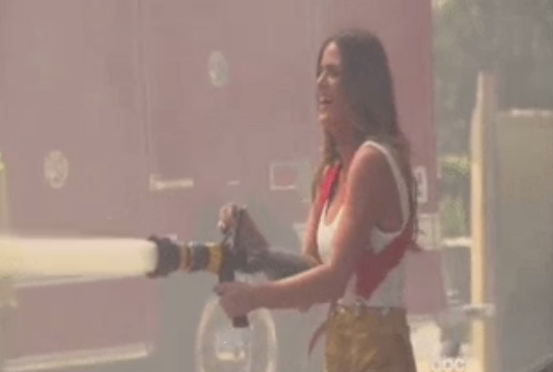 Later, Luke in his T-Bird leather jacket says, “I’m so glad to like…..beeee here.” No seriously, that was his opening line to JoJo, said like he was a basic bitch. He talks about his history in the military and how he’s had a few serious relationships. Then they tongue. (Update: I still can’t figure out why I hate Luke but I want to punch him square in the face.)

While the boys are at the date, Chad straps his suitcase full of protein powder to his dick and does some pull-ups. The rest of the gents watch and laugh at him. Then James Taylor leads them in a campfire song called “JoJo” and Chad sulks in the kitchen. I’ve never gone from hating someone so much to siding with them so quickly. 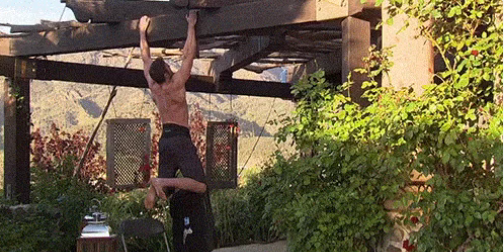 Love is Full of Choices with Derek

The premise of this date is that signs are placed in front of their powder blue vintage convertible and they have to decide on the count of three. They both decide sky and OMG THEY’RE SO COMPATIBLE. North or South? They (JoJo) pick North and they better keep their head on a swivel for South because he was PRETTY PISSED they didn’t choose him. While flying to San Fran in a private jet, Derek and JoJo play thumb war with both hands, at the same time. It’s the weirdest thing I’ve ever seen. In the end they picnic at the Golden Gate Bridge and it’s pretty vanilla. 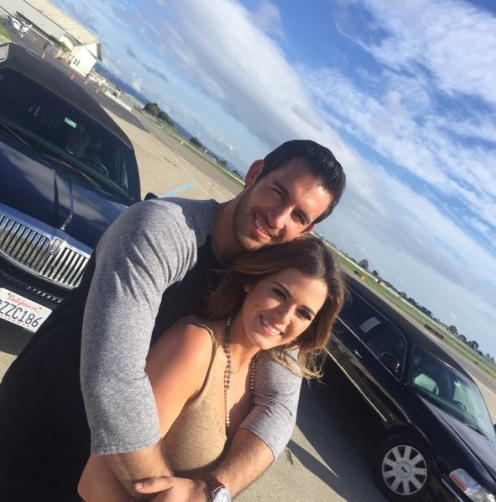 Later at dinner, JoJo repeats everything that they did that day. As if we didn’t watch it and they didn’t live it. Then they talk about past relationships and Derek closed himself off because he thought he was getting married and there “was another person involved in that.” Which is a weird and long-ass way to say he got cheated on. They’re on the same page about trying to be more open. Derek’s cute and all but this date was boring as hell. The grand finale is making out in front of a Technicolor water fountain. Obviously Derek gets rosed.

Meanwhile, on the Chad show, he makes a really intelligent analogy about how if he blended the dudes in the house into a protein shake, they wouldn’t win this show. WOW Chad, what a brainteaser. #DudeProteinShakes should be trending forever. It will also probably be the name of his pending blog and exercise powder sponsorship, post-show. Although to give him credit, he’s talking to Daniel during this musing of men and shakes and I’m sure that made COMPLETE sense to the Canadian male model who still thinks Damn Daniel is relevant. They’re both wearing frat tanks during this convo, because of course.

“Prove Your Love To Me and the Nation” with Jordan, Christian, Nick, James Taylor, Alex, Chad

JoJo “is on” Sports Nation where she gives only the hottest of takes on Steph Curry’s career. HOT GIRL LOVES SPORTS! Not a cliché at all! The hosts of Sports Nation conduct a series of tests for the men in the ESPN studio. First they practice their touchdown dances with a rose. They’re all equally as embarrassing and I wish to revisit none of them. Then they play dizzy bat but instead of chugging a beer, they have to propose to JoJo. Remind me to never suggest this as a party game. Chad is like hey marry me, ho and then calls her naggy. Good combo. In the press conference portion, the bruhs are asked serious questions about marriage and JoJo. James Taylor obviously sings his answer. (DOES HE EVER NOT SING?!) Everyone calls Chad out for being a doucheroni and he defends himself by being completely honest and saying he wants to get to know JoJo before he says he loves her. Then fires back at the gang for never seeing a beautiful girl before. Truthbomb city. The hosts wearing basketball sneaks with suits pick the top three in descending order: Alex, Chad, and James Tay as the numero uno. Chad thinks the rest of the guys here are a bunch of sissy wieners.

At the hang afterward, James Tay creeps all up in JoJo. He tells her, “a smile is the only thing that you can see on the outside that comes from the inside.” What? As if that wasn’t confusing enough, he then reads aloud a note that basically just lists his interests? I don’t know. JoJo tears up for some reason, which leads me to believe she’s practicing her acting for future career moves because in no way would someone saying they sometimes like chick flicks make a bitch cry. Regardless, they kiss and James ends up with a rose. So apparently his constant singing only annoys me? Whatever.

In other group date hang news, Alex sits in a giant chair you find at Cape Cod beaches, further highlighting his midget status. And Chad talks about how hard he works, not allowing him to have a relationship. Yeah okay, Chad. THAT’S why you’re single. Then he tells JoJo that he inherited a dog from his mom and JoJo was like omgg are you and your mom close? INHERITED, JOJO. AKA she has passed. It only happened about six months ago and that seems like a red flag that he was casj about it. They make out and JoJo feels better about Chad acting like a dick all day because he opened up to her.

This is when Chad really starts to derail, and by derail I mean turn into me when I attend a party with free food. But first, he greets JoJo at the limo to tell her that he worked out that day and avoided all of the other brosephs in the house. JoJo is all about that bad boy life so she eats this shit right up. He gives her a smooch and she says thank you.

Then the rest of the guys do the thing I hate the most on Bachelor(ette)….they gang up on Chad for getting more time with JoJo. It’s embarrassing and pathetic that they’re attacking someone for being more strategic than them and it makes me want to like Chad. I guess I’m into bad boyz too. While they’re scolding him for talking to JoJo, Chad goes IN on a meat stick and I respect tha hell out of this tactic. He then fills plate after plate of lunchmeats and wangz, savagely tossing them down his throat while everyone else judges real hard.

Where’s the fat shaming during the Bachelor? Have we ever even seen the women eat or does their diet consist solely of white wine while they’re filming? DOUBLE STANDARD. After Chad feels satisfied with his pre-bedtime snack of meats, he cuts lil Alex off so he can tell JoJo how much he likes her. And then, just to prove that he can, he doubles back and does it again to ED guy. To be clear, cutting in on ED guy is a walk in the park. This guy is such a lamewad with his stupid hair and weird job that I’m wondering how he’s still kicking on this show. Chad could’ve given him a noogie while he was stealing JoJo and I probably would’ve cheered him on from my couch. Realistically all he needed to do was get Daniel in there to poke Evan’s belly button and it would’ve been game over.

Either way, by the end of last night’s episode I loved Chad a lot. It helps that he gave us quotes like: “Shes’s gonna keep Alex around because she doesn’t want America to think she hates short people.” Hey Chad’s just telling it like it is and packing on the protein. Haters gonn’ hate, Alex’s gonn’ be short.

2 thoughts on “The Bachelorette- Chad Came for the Free Meats”