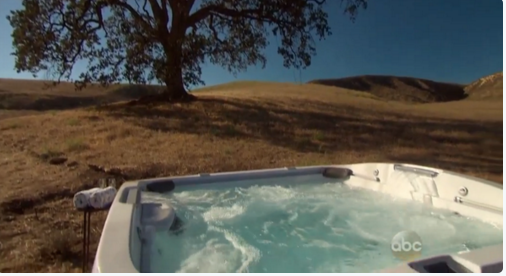 This week the ladies are all lounging on the couch in their trendy workout gear and it causes me to wonder if they actually do group yoga in the morning or if like me, they wear workout clothes to trick people into thinking they’ve just exercised. Someone arrives at the house and they’re all like “OMG THAT RUN WAS JUST SO HARD.” “Oh, never mind, it’s just Chris Harrison.” Lauren B, not to be confused with LB (who left last week), gets the date and 3.5 seconds later has perfectly wavy hair and has chosen a sexy but cute outfit.

“The Sky’s the Limit” with Lauren B.

Ben kicks things right off by saying, “Join me on my magic carpet ride” and I get the creeps. No Ben, just no. They’re going up in a baby plane that does flips and shit. Lauren B might be a flight attendant but apparently she’s the kind that straps in during turbulence and clutches rosary beads because bitch is terrified to be in a plane. But then once she’s up in the air she’s AOK and has the time of her life. Nothing could ruin this date—not even THE MOST AWKWARD KISS ON THIS EARTH. No joke, I shielded my eyes when they did the kiss head jerk several times before making contact. They fly over the bachelor mansion and even though no one can even see them inside the plane, the girls all spontaneously combust with jealousy. The plane touches down in a field that is spacious and empty, except for the hot tub that was conveniently dropped there. I guess Ben’s a real hot tub guy? Lauren B’s like omgggg I don’t even know how this got here?! And then changes into a swimsuit. It turns out they’re better at kissing each other when they’re not squeezed into a toy plane dressed like Snoopy. 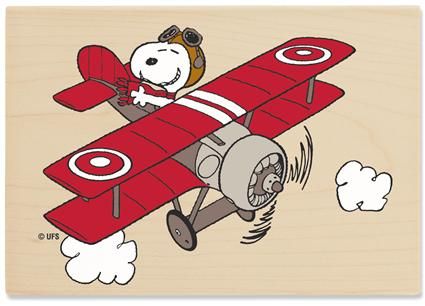 Back at the mansion, Caila cries and squeals a lot about him going on other dates. I hate that I said I liked her. On the date that Caila isn’t on, Lauren B. reveals that she’s still single because she compares all men to her dad. Sexy. Ben tells a story about how his dad had surgery once. So like, a lot of dad talk for a first date. It wouldn’t be a one on one date if it didn’t end with a singer no one knows the name of performing for them. The two slow dance, and by slow dance I mean stand in front of this singer whose just trying to get a little fame and tongue each other.

This date kills two birds with one stone. First, it allows for a “celeb” appearance with two soccer players from Team USA (I don’t know their names, sue me.) Second, it gives the girls who are all passive aggressive AF, an activity for them to be aggressive aggressive toward each other and just look dedicated to the game. This game was essentially made for Olivia, who claims soccer isn’t her thing, yet is out for blood. Literally. Once the girls find out the losing team can’t hang with Ben later, shit gets real, real quick. The stripes team get fired up because they have the least flattering Where’s Waldo uniforms ever, and the stars team has Emily (?) who can take a ball or two to the face. In Olivia’s plan to murder anyone who stands in between her and Ben, she sees that Rachel maybe broke her leg and goes after her to snap it clean off of her body. Team Olivia wins.

Back at the mansion, Jubilee cries about how she’s not Ben’s type and Jojo nods in agreement. (Could there be more crybabies up in this hizouse?) Speaking of whiny hoes, at the group hang, Olivia grabs Ben first and so therefore the rest of the girls talk about her ugly toes and bad breath. It’s only fair. When Olivia returns to the gossiping hags, Jami narcs on them and so ensues the most hilarious guessing game ever to occur. Jami is all; they were talking about some of your physical features. And Olivia is like was it my tree trunk calves? Or my cankles? My wide shark mouth? Don’t ever make a girl guess what is wrong with her…the options could not be more endless.

Amber gets a rose after finally speaking to Ben for the first time. And smooching him. So unfortunately she’s safe for one more week. Cankles Olivia is obviously offended she didn’t get a rose but reassures America that it’s only politics because according to Ben’s secret cues, they’ve basically already eloped. To be clear, the cue she’s referring to was him pushing off her leg to stand up from the couch. I can’t believe I didn’t know that a leg graze was sign language for “we have a kid on the way, the rest of this show is just a formality.” I need to pay more attention in life.

“Love is in the Air” with Jubilee

Apparently Jubz turns into an awkward bird when she’s nervous and makes sassy jokes. In other words, Jubilee is me. Ben has a helicopter come to the house to pick her up because he’s unoriginal and apparently we can expect all of his dates to have some form of aviation + a hot tub+ an obscure singer/songwriter. Anyway, Jubilee is afraid of heights and jokingly asks if someone wants her date cause she’s wearing white and doesn’t want to shit her pants. Everyone just about crucifies her for that comment because she got a date and they’re all duds with no sense of humor. Jubilee convinces me even more that we’re the same person when Ben feeds her caviar; she promptly spits it out and tells him she prefers hot dogs. I was all for Jubilee until she jokingly calls Ben a white boy, which is fine, but then she decided to dissect it afterward in the hot tub. That made for some realllllll awko taco. I was just trying that one on for size, Jami. I think I hate it.

Later at dinner, they talk about how Jubilee has so many layers and it turns out one of those layers is that her entire family died in Haiti. So like, real dark shit. Ben clearly doesn’t know how to react to this so he caresses her hand a little and tells her she’s gr8. She gets a rose and a seat on his lap. When the rest of the house finds out Jubilee got a rose, they’re really excited for her. NAHT. Lauren H. is shocked and declares, “Ben wants a wife who hangs out with all the other soccer moms.” Congrats on coming off sexist AND a little racist, LH.

The normally upbeat and time-stealing cocktail hour takes a somber turn right off the bat when Ben announces that two of his family friends died that day in a plane crash. Olivia senses that he needs a little comforting and pulls him aside to talk about how much she hates her legs. She takes the empathy route, tears up a little bit and tells him how hard it is to be strong in the face of tragedy. No but seriously, an Emmy for the editor who cut this together because that’s quality TV right there.

Jubilee actually does comfort Ben with a massage. Except oopsie, her act of kindness made all the women in the house hate her 1000 times more and turn into bitchy locker room monsters ready to attack. They claim that she’s flaunting her rose—meanwhile she hasn’t spoken to anyone all night. I see some holes in this theory. Amber beckons Jubilee to come over and get verbally assaulted for doing nothing wrong and Jubz is like aw, hell no and runs away. Ben gets involved because he’s awkward and thinks he can solve drama. In the end, Amber looks like a real asshole and should’ve gotten her rose revoked, and Ben is on Team Jubilee. It’s cute that Ben thinks the drama is all over and ends up walking right into Lace, who I’m guessing if she got more camera time this week, she would’ve been saying this:

Lace is all tears and has decided to leave because she needs to work on herself. Apparently she hates herself as much as America does. Bye, Lace. It’s been real making fun of you. #Gone2Soon

Jami turns into the bitter single drunk girl, says she’s going to get a lot of cats and that humans are garbage. “THAT’S WHY IM ALWAYS SINGLE!” she shouts like she just downed a tequila shot at last call and is going home alone. YIIIIIKES, Jami. Famous last words. You could’ve been remembered for making up a mediocre rhyme abbrev that would one day turn into a graphic tee sold at Forever 21 with the taco emoji BUT INSTEAD we’ll always know you as the singleton.

Update: That was really naive of me to think that this wasn’t already a tee. And that it’s even more unfunny when printed and mass distributed for sorority girls to wear because they ❤ Chipotle. Oh, god. There’s so many dumb variations. Be better, America. 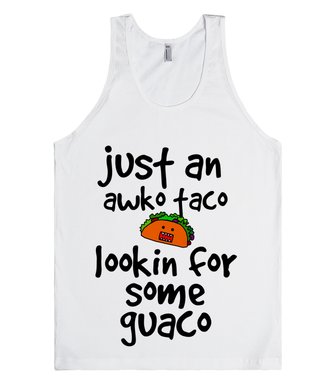 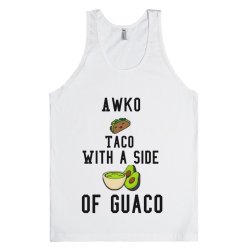 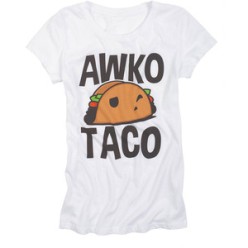