Hey, hey, hey, we’re still in the Hamptons and everyone’s gotten over fangirling all up on Erika Jayne so now I’m bored. Last night’s final event of the trip is the opening of a pop-up shop for Kyle’s “Forever 21 for 50 Year Olds Trying Too Hard.” Seriously, do you see the fitted hats with glitter words in the above picture? Three of the girls wear pink to the event and Lisa almost rips their dresses right off them upon her arrival. Bethenny is still lurking around the wrong show and approaches Erika to apologize but not really apologize. Erika’s like we Gucci, I don’t concern myself with your opinions. Then we get into the juicy biz of gossip because not an episode goes by without a side conversation about Kim Richards that gives Kyle the uncomfies. Rinna thinks it would be approps to revisit last year’s feud with Kim so that she can declare that she caused Kim’s addiction and downward spiral. Oh, Rinna. Stop making everyone else’s problems about you. Kyle sneaks up on the group as they’re making her family’s deep-rooted issues about themselves and everyone gets REAL nervous. It’s like when you were in high school and your parents walk in on you and your friends talking about whose getting alcohol for your basement drinking on Friday night and instead of covering it up everyone just turns and stares at them, looking guilty. Surprisingly, Kyle handles it well and instead of losing her shit she shouts LET’S DRINK TO NOT CARING ABOUT KIM! WOOHOOOOO HAMPTONS.

The ladies all purchase their age inappropriate crop tops and booty shorts and then head back to Kyle’s for a dinner party. Obviously housewives can’t eat dinner without a little drama. Eileen and Lisa start yapping about their dumb disagreement over asking too many questions or whatever and Ken, WHO DOES NOT HAVE A G-D LIFE OUTSIDE OF FOLLOWING LISA AROUND, butts in and demands to know what Eileen’s talking to HIS WIFE about. Look, I can’t shit on Ken enough this season. It’s getting sad. He needs to find friends and stop attending all-female events and involving himself in bitch fights while Giggy sits on his lap. If he ever had a man card, it’s been set on fire this season.

Anyway, the conversation spins back to feuds past—so Erika can get caught up on all the shit she definitely already knows about. And while Kyle is addressing her demons with Kim’s addiction, Rinna tells us in her confessional, “Kyle’s sister is getting arrested left and right and it’s affecting me deeply.” Oh, it is, Rinna? Poor you. (I’m salivating over Kyle sinking her teeth into that sound byte at the reunion.)

Once the girls have politely sniffed at their lobster, Kyle feels like it’s an opportune time to play round robin of “what keeps you up at night?” I guess this is better than charades or whatever it was that ended with the girls calling each other slut pigs, but it doesn’t seem like it will go well at all. Lisa’s like, I don’t have any problems, tralala. And then…dare I say it. I laughed out loud at something Kyle said. She comes out of left field with the zing of the century for Lisa when she says; “Your biggest problem can’t be getting a mini pony onto a private plane.” Everyone’s shitting on Lisa for her first world problems and Eileen is like hey everyone I’ve been abused. Yikes, Eileen. Read the room. We rebound quickly from the heavy when Kyle is all, okay not to be selfish but… HAHAHA Kyle’s got jokes tonight. Seriously, she was on FIRE!

In other boring news, Erika cruises on over to Ohio in her private plane with shitty chamomile tea bags to pick up Yolanda after her surgery. We have to look at her disgusting implant photos again. Ralph city. And also, Faye Resnick is back. She’s here to design Kyle’s new closet the size of my apt and give unsolicited family advice. I wish Connie Britton played Faye Resnick in real life too. 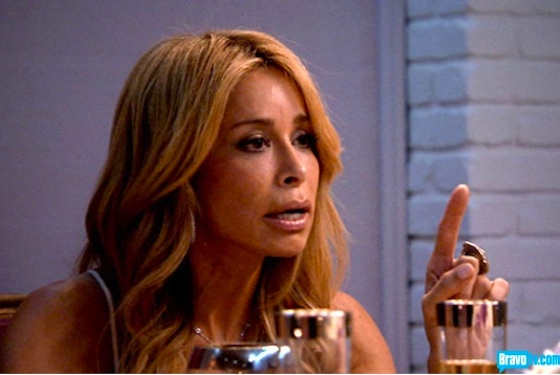 Next up—the Hero Dog Awards, where celebrities match their toy dog to their outfit and carry it around Pump with a cocktail. This party WOULD have been boring, had we not met the next newbie in the crew. I thought the day would never come, I mean she doesn’t even have a mildly offensive and definitely narcissistic tagline in the opening credits. If she did, maybe it would say that she’s introduced as Rinna’s friend, but Rinna clearly knows nothing about her. Not five seconds after Rinna’s like omg Kathryn I can’t believe it’s you; she brings up the most infamous celebrity murder in the past 30 years. You know, typical catching up chitchat. Apparently Kathryn was married to Marcus (OJ’s BFF, and possible sexual partner of Nicole Brown-Simpson) at the height of the whole thang. Rinna makes it no secret that the only things she knows about Kathryn she probably read in Faye Resnick’s memoir and therefore I’m guessing Kathryn’s title as “Rinna’s friend” is preeetttyyy loosey goosey. 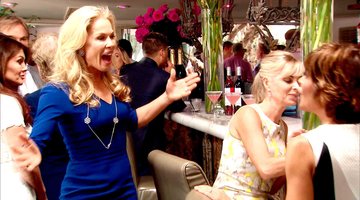 Looking to make this staged run-in more awkward? Look no further than Eileen who gets a case of the nervy word vomits and goes Hi Kathryn nice to meet you; I dated your ex-husband once. And we’re off! To a great start with Kathryn-no one knows her last name. Once Kyle brings Faye into things, it becomes very clear that maybe we should leave discussion of murder off the Real Housewives. The Kardashians are already involved in OJ. Let’s leave well enough alone, shall we ladies? We’ve boatloads of drama without involving an infamous homicide. JK we’re going to milk it for this season’s drama clearly because next week is Faye Vs. Kathryn to hash out 20-year-old beef. I do know one thing though. OJ’s been laying heavy on Rinna’s life and that’s definitely something we need to consider and console her for.