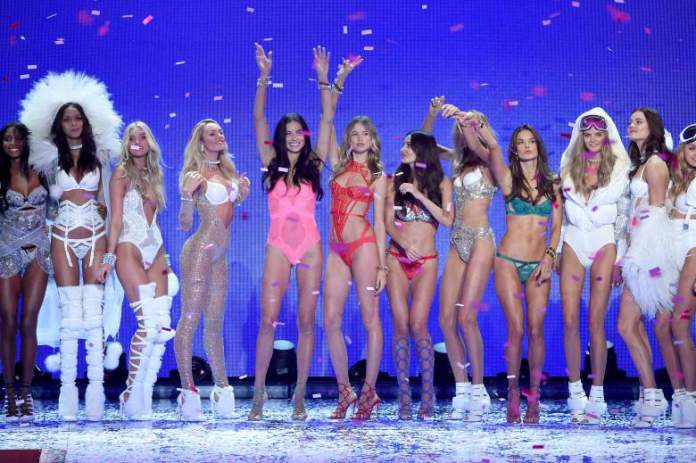 The VS Fashion show is always right around the time of year when I’ve already had my winter body for roughly 2 months. And yet I still plop my ass on the couch in an oversized sweatshirt surrounded by snacks so that I can comment out loud to myself “she’s TOO skinny.” All in all I’d say it’s an annual success in reaffirming that my daily regiment of eating every hour and never exercising makes me a supermodel at heart. It’s the inside the counts. Last night Taylor Swift and her runway star power was sorely missed but there’s never really a shortage of things to giggle at.

-Last year I ripped on the amount of kisses blown and how the angels actually discussed their preparation for getting the right wink.. Well of course there were 1 trillion more facial spasms this year but the new move seemed to be the shimmy into a wink. It was a welcome change from blowing a kiss at the end of their strut. I’d rather see them toss those moneymakers around than give dramatic air smooches.

-With Kendall’s debut as an angel, it was to be expected that the Kardashians would snake their way into the spotlight. Momager Kris was probably salivating at being the equivalent of an Awards Show Taylor Swift with the amount of times the camera cut to her in the crowd doing this (every.time.Kendall.walked):

-The Weeknd wasn’t briefed on how the models like to clasp hands when they walk by the performer and watching him navigate that on the fly was downright entertaining.

-Definitely wasn’t jelly at all of this…her core is like TOO flawless, ya know?

-Ellie must have learned from last year’s near Ariana Grande beheading because she just missed a decapitation by some ferocious butterfly wings. (Also did 90’s Mariah Carey design this show? What’s with all the butterflies…) 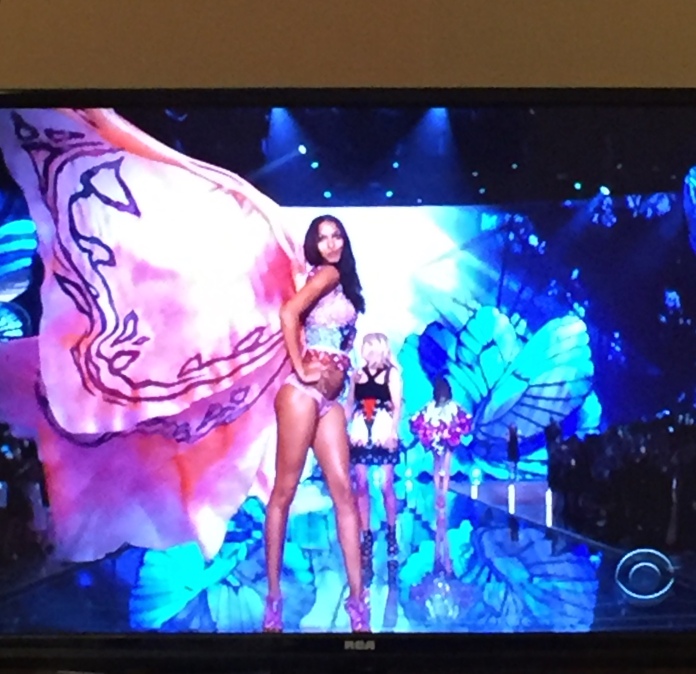 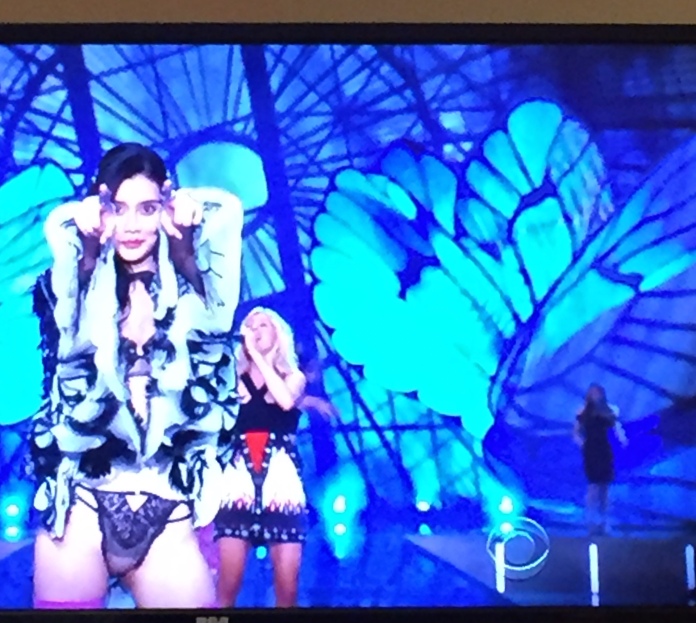 -Selena Gomez takes on the Pink collection, which is essentially cute PJ’s, sports bras and cotton briefs yet she wears this and it’s OUTRAGEOUS. I love Selena but she’s gorgeous all on her own. I don’t think she needed to pop in blue contacts, ask for her spray tanner to make her a different race and wear a silk dress that was one shimmy away from a nip slip. Read the room, Sel. 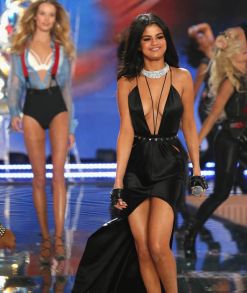 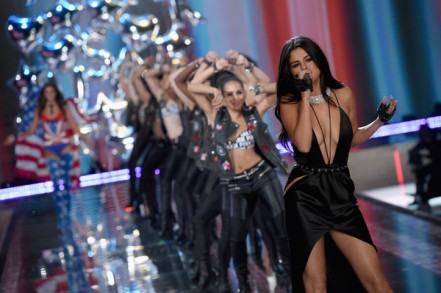 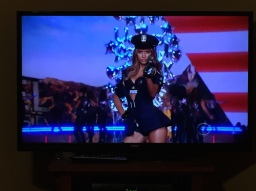 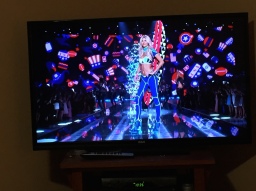 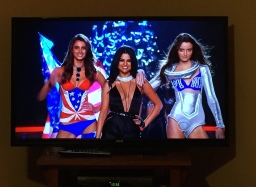 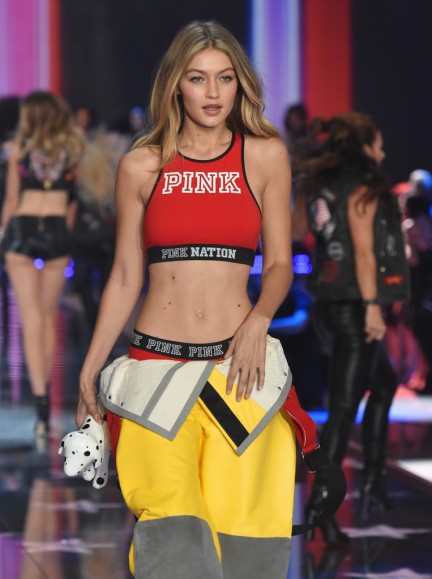 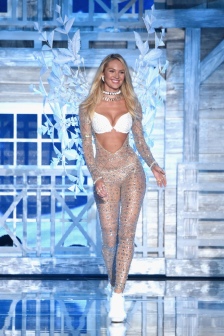 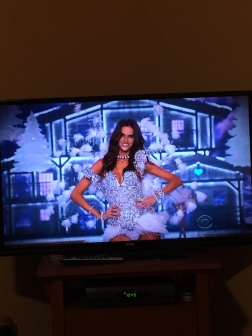 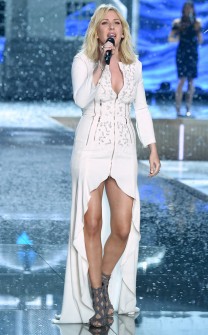 -Sucks to be this chick wearing ACTUAL firecrackers. WINK. 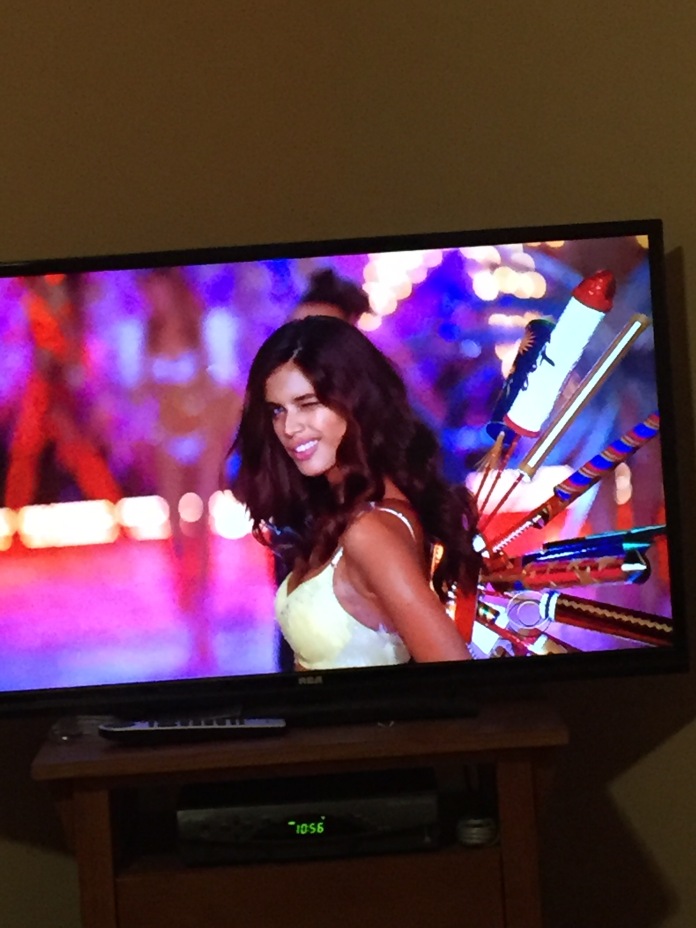 -If we’re being honest I’ve seen more extravagant fantasy bras in years past. 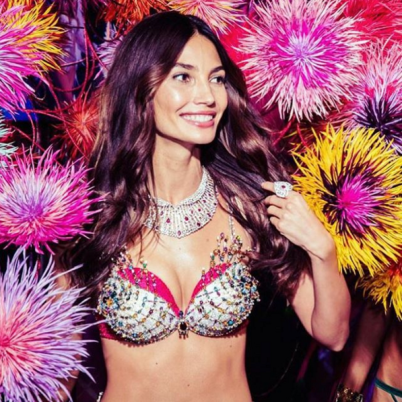 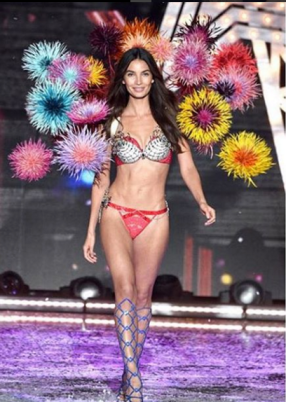 Fluff Pieces that made me laugh:

-A backstage promotion of Instagram and who has the best account/most followers quickly snowballed into “how to take the perfect selfie.” As the young’ns rattle on about angles and lighting, Adriana Lima stomps on them by pointing the camera at herself and saying, “TA-DA! I’ts not that hard.” HAHA you rookie idiots, watch Adriana, you might LEARN somethin. Realistically when you look like her… it IS supes easy to take gorgeous selfies.

-The squad wouldn’t be the squad unless they took a few moments to casually insert how much they loved being in the Bad Blood music video and strutting down the 1989 stage. Lily was like fantasy bra? Who cares! I’m BFF’s with Taylor!

-A detailed workout segment that ended with one of the angels saying, “I totally think we’re athletes”…I’ll just leave that one there for you. Interpret it as you will.

-“It’s a little weird walking past your sister’s boyfriend in lingerie but it’s gonna be great.”-Gigi letting us know that her and Bella are SO Hollywood. JK I’m obsessed with Gigi and she looked amahzing in the show. Real proud of her. 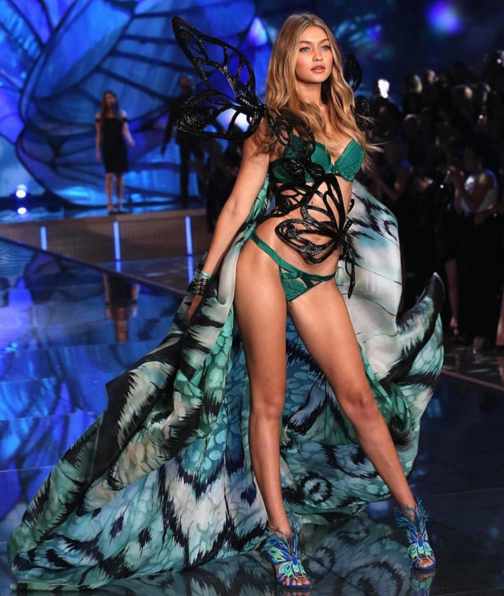 -Lily speaks to the fantasy bra while the grumpiest security guard in all the land stands watch on camera. This is a bra made of colored gems, not Buckingham palace. Let’s calm ourselves.

-Annual holiday commercial features Tay “This Love”, of course. Hey—wait a second—Rome doesn’t look like that! It looks like thousands of people everywhere sweating and gladiators charging you to take a picture next to their toned pecs and tacky costumes. I guess Michael Bay envisioned a more magical Rome, whatevs.

We had ourselves a little #RomanHoliday…here’s the full commercial again. #VSFashionShow https://t.co/AomBXOEstp