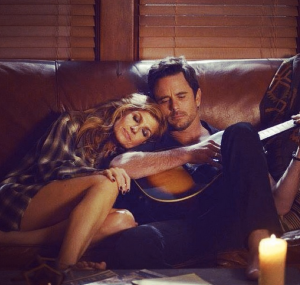 Nashville is back for season four tonight and rather than dwell on the terribly predictable and overplayed story lines we have ahead of us for another full season, I decided to focus on the best aspect of this show—the music. Here’s a collection of some of the top hits from Nashville seasons 1-3. Unfortunately I’m not a huge Rayna James fan, sorry let me re-phrase, I’m a huge fan of her hair and boss bitch qualities, I’m NOT a fan of her music, so you will not find much of it here.

1. Wrong Song-Connie Britton & Hayden Panettiere AKA Rayna James & Juliette Barnes. This sassy-Deacon-tell-off is the best thing Rayna and Juliette ever collab on. Sometimes it’s easy to forget that Deacon bagged them both, but this song exists as a friendly reminder that these two frenemies are also Eskimo sisters.

2. If I Didn’t Know Better-Sam Palladio & Clare Bowen AKA Gunnar Scott & Scarlett O’Connor. If I recall correctly, this was the first song that Gunnar ever got Scarlett up onstage for and from the moment they gazed into each other’s eyes, we knew we were about to get a boatload of sexual tension via open mic night. Forever my favorite singing duo on this show, I could listen to these two have breathy harmonies until the end of time.

3. I Ain’t Leavin’ Without Your Love- Sam Palladio, Chaley Rose & Jonathan Jackson AKA Gunnar, Avery & Zoey. This was the short-lived group project of “ZAG” before everyone was like why is Zoey even here? She sucks. Then Scarlett was like joke’s over guys I’m done being retired from music and swiftly took ole Zoey’s spot in the band and sent her packing to Oklahoma or something. Anywho, this song was Zoey’s best contribution to the show.

4. A Life That’s Good- Lennon & Maisy AKA Maddie & Daphne Conrad. There is another version of this song that has the happy yet quite dysfunctional fam of Rayna, Deacon and the girls but I’m partial to anything with just the two girls…they deserve all the stage time they can get with their knockout voices.

5. Don’t Put Dirt On My Grave Just Yet- Hayden Panettiere AKA Juliette. This is one of my favorite Nashville songs, not even because it’s supes catchy but also because it’s a big middle finger from Juliette. Jeff Fordham tries to make her publicly apologize at the Grand Ole Opry for saying God doesn’t exist and instead she slams down this song and it’s sassy and fabulous. Also she gets fired and blacklisted from all country music labels but that’s neither here nor there.

6. If I Drink This Beer- Will Chase AKA Luke Wheeler. Rayna gets involved with Wheels Up right quick after a disastrous Deacon fall-out and we all just wait for the other shoe to drop. Unfortunately they dragged it out for an entire season and she holds out until their wedding day to be like jk I’ve been in love with Deacs this whole time. Luke takes it really well—naht—he turns their wedding into a free concert and sings this sad song about getting drunk with a broken heart.

7. Borrow My Heart- Clare Bowen, Jonathan Jackson & Sam Palladio AKA Scarlett, Avery & Gunnar. This was performed as “SAG” because S booted the Z out and then once they realized they were a fire flames band, they decided to change their name to the Triple X’s. Much better. Probably not at all awkward that everyone on this show has banged each other and also sang about it.

8. Tell Me (Acoustic)- Audrey Peeples AKA Layla Grant. I’m a pretty avid Layla hater, mostly because she almost never sings then married a gay guy, then got together with the most hated character ever and thought he loved her but putting all fictional character judgments aside, she really crushes it on this one. No pageantry, just good vocals.

9. This Town- Claire Bowen & Charles Esten AKA Scarlett & Deacon Claybourne. Scarlett and Uncle Deac, always the perfect pair of introverts both hate the whole Hollywood aspect of being a musician and feel like they don’t belong so they wah-wah about it in this great piano tune.

10. Heart On Fire- Lennon & Maisy Stella AKA Maddie & Daphne. When these two cherubs are singing it makes it very easy to forget how insufferable Maddie actually is in her angsty teen years. I believe this number is from the episode when Jeff “the creep” Fordham strikes a blackmail deal with Teddy to get Maddie signed to his label so he could profit off of her melodies and box out little Daphne. This song should stand as proof that the dream team should never be separated.

11. What If I Was Willing- Chris Carmack AKA Will Lexington. This is a country HIT from ya closeted boy, Will. One of his first songs and a sure banger, things sort of went downhill for him, probably a side effect of hiding your sexuality on a reality show with your wife, but fingers crossed now that he’s out and dating a songwriter the hits will start flowing again.

12. Have A Little Faith- Maisy Stella & Will Chase AKA Daphne & Luke. This one is included because it tugged at my heartstrings. Ever the dramatic Maddie leaves a benefit the two of them are supposed to perform at to be with HER REAL DAD, DEACON. Little Daphz is like it’s cool I’ll just hang out by myself while you two kick it with your real family and Teddy does something genuinely nice and asks Luke to bring Daphne up onstage for this adorbz duet. Also she’s like 11…that voice…damn gurl.

13. Fade Into You- Sam Palladio & Clare Bowen AKA Scarlett & Gunnar. It seemed fitting to end with another golden duet hit. We’re about to be four seasons in and these two are still not quite done with fading into each other (if ya know what I mean) so this song will forever be relevant.