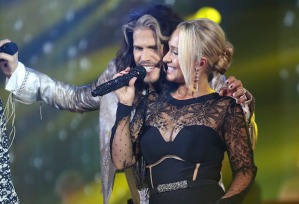 Back in the saddle and only one month has passed since we saw a heart monitor flatline and the writers made Nashies out to be a bunch of gullible dum dums. A fictional month may have passed but they can’t pull the wool over our eyes, although it was pretty entertaining to watch them try.

The episode begins with Juliette working the red carpet for that movie she filmed while she was preggerz and trying to hide it. She is clearly still on the path of ditching motherhood for Hollywood but MORE IMPORTANTLY, her boobs are out of control. No, seriously, I’ve never seen more cleavage from her in one episode, not even when she was 100 months pregnant and had to be pulled out of bed by a crane. Clearly post-baby bod looks hella good on her. But I digress because while she’s living the dream, the writers are in the process of trying to convince us that Deacon died by showing a sad Rayna in an old tee staring mournfully at her daughters and then going to bed alone with a frownie face. As if that wasn’t enough, the next morning she discusses losing Juliette to Wheelin & Dealin Records with Bucky and sighs, “I’ve been doing a lot of letting go lately.” Proud of them for laying it on thick but THEN when you least expect it, Rayna and the girls are visting Aunt Bev in a hospital bed on life support and lookie, lookie what we have here…Deacon sashays into the room looking like a million bucks, obviously, because HE IS VERY MUCH SO ALIVE. He was all, sorry I didn’t come home last night I stayed at Bev’s side. Nice try, turds.

Once I was done being bitter about how outrageous the Deacon saga was, then I could focus on the rest of the episode, which included a lot more of hover-hand Steven Tyler invading Juliette’s personal space than I expected. No seriously, they shared a mic. But before that happened, we checked in with Scarlett & hot doc who I still don’t remember the name of. Apparently one month of living togets and Scarlett has turned into a housewife who dons silky lingerie. Hot doc gifts Scarlett with a vintage necklace to celebrate the fact that she stuck around and with a case of the stutters it becomes very clear that these two probably use the shared bed just for sleeping. Then Scarlett skidaddles over to Gunnar’s house where she pretends that they never smooched and Gunnar is like yeah totes I haven’t been dreaming about it for a month or anything. They sing for a couple minutes then forage each other’s mouths again. Scarlett says no more because she has a boyfriend and he’s safe. Yikes. Sounds like her and hot doc have something really fantastic. Naht.

Another relationship that’s really thriving is Juliette’s and Avery’s. If by thriving we mean Juliette gets hammered every night and Avery is playing Mr. Mom in Ohio, living with the parentals. Juliette calls Rayna sobbing one night after one too many ‘squila shots—we’ve all been there Julez—except when I have too much tequila it’s just a bad decision, when she has too much tequila it probably doesn’t help the rage that she has for her just-born infant that she abandoned like it was no big thang. Juliette continues her descent into asshole-land by ignoring a text from Avery, and verbally assaulting both Rayna and Layla. When she tells Layla, “I didn’t think I could think any less of you but there you go making it happen.” I’m like damn, go after the jugular, knock some sense into that sad, sad Fordham-lovin-girl. But when she tells Rayna that her label’s a joke I have the urge to give her a swift bitch slap. Fortunately Rayna handles that for me when she smoothly fires back with, “You break my heart, girl. I swear you do.” YOU DON’T EVER BREAK MISS RAYNA JAMES’ HEART. YOU GONN’ LEARN, GRRRL. What breaks my heart is that Rayna doesn’t know the number one rule of being famous is never googling yourself. She does that on the plane ride back to Nashville and really piles on the hate parade for Highway 65. Fingers crossed she gets her fire back right quick.

Someone who hasn’t lost her angsty teenage fire for one beat is Maddie, of course. A month is not nearly long enough for a teen girl to mature. Teddy sends the girls letters from the big house and Maddie throws hers right in the garbage. Teddy is a criminal and doesn’t even know how to play guitar so as far as Maddie’s concerned, he sooooks. Daphne takes it upon herself to scoop that letter right out of the trash and do a little eavesdropping (a little sister after my own heart.) Deacon walks in on Maddie trying to rip Daphne’s arms off and breaks up the sis fight but Daphne takes a page right out of Maddie’s book and shouts “You’re not my real dad!” and stomps up the stairs. Maddie tries to reason with Deacon and suggest that if he marries Rayna, Daphne won’t be able to say things like that. One would think the child of Rayna James would know better at this point but just to make it clear…marriage doesn’t make a dad and judging by the amount of stepdads these two almost had after slutty post-divorce Rayna, Daphne can very much say such things whenever she damn well pleases. #TeamDaphne.

In the last few minutes, we see Scarlett tell hot doc she loves him, instead of confessing to her tongue’s extra-currics, Juliette looks at pictures of Avery & spawn probably wishing she were less hungover and her better half decides to move his infant in with Gunnar and Will. Cause nothing says raising a child quite like having bro roommates. Full House: Nashville edition, anyone? What kind of wacky antics will these three goons get into, I wonder. Will they write some songs about changing diapers? Only time will tell.

Things that don’t matter yet:

– There’s a new hot guy working with Jeff to cage Layla in and “manage” the tour. And so begins my favorite game…WHO WILL HE BANG?! Spin the wheel, folks!

-Deacon is an ugly crier. This isn’t relevant to anything. It just needed to be said.

-Bev is coming back to life. Ugh. Why.

-Will does the greasy Abe shut-in thing for a while as the label punishes him for coming out but then he gets even more sad when he realizes he hates gay bars and DOESN’T BELONG.

-Layla still sux and leaves Jeffy Fordz the neediest teary voicemail I’ve ever heard begging him to tell her she’s #1 where it counts. No girl, you’re not.