I gotta be honest we better be winding down on this rescheduled awards season because I’m running out of free trials I can sign up for just to watch them. And if I’m being REALLY honest, I wasted a free trial on this one. I had high hopes. I know, you’re probably saying, LEARN YOUR LESSON ALREADY, JULIA. ALL AWARDS SHOWS STINK. And normally you’re right. But we all know I could never skip out on an event that involves celebrities and the potential for gossip. PLUS, they were really amping up the “no zoom” aspect of this one. I’m so thirsty for a live awards show without a wall full of screens and awkward delays that I actually got excited for the Oscars. I’m here to report it was the LARGEST of disappointments. I’m not sure if Hollywood Libs just weren’t comfortable attending in person (I mean, we all know they’ve been vaccinated and get tested 24/7 anyway by their on-staff doctors) or if they just want to make it LOOK like they’re not comfy but basically no one showed up to this thing. We have about 4 big names, no host, and the thing played like we were watching a livestream of a work conference for actors.

It was D-R-Y as shiiiiiiiittttt. On top of the fact that they were really trying to create a “storyteller” vibe to the evening giving each nominee a 20 minute backstory, they also STOPPED REGULATING ACCEPTANCE SPEECHES. Do you know what happens when you don’t have a musical cue to tell people in show biz to STFU? They don’t STFU. They just keep talking. For-EV-er. So anyway, joke’s on me for signing up for FuboTV for one night of a 4 hour TedTalk on the art of movies. I’ll save you that torture and try to keep the red carpet short and sweet. There’s a handful of nobodies in here simply because I either loved their outfit or hated it. That’s how I decided to include someone in my fashion critique when I have no clue who they are. The ladies were having a RED HAWT night and that pretty much sums up the outfits for the worst Oscars ever.

This may seem contradictory to my style because I’ve been known to slap on a pair of kicks for any occasion but also IT’S THE OSCARS. Walking the red carpet like you just stepped off the farm is pushing it a little too far. I’m not saying you need to be a Glam-azon but an effort wouldn’t hurt here.

This lady with the lizard-under-attack neck is also carrying a SHRIMP clutch. And honestly I might’ve considered tossing her on the best dressed just for that accessory if it looked like an actual shrimp. Details are what puts asses in the seats and this what looks to be pencil drawing of a shrimp with a chunky white outer layer is just not cutting it.

I don’t think I realized I was in a snarky as hell mood until I started writing these worst dressed captions. Maybe if I didn’t get tricked into watching this informational awards show I’d be kinder to the fashion choices of Hollywood. Probz not though. For example, Margot looks great in this dress but she decided to get bangs and I feel as though she needs to be punished for that choice. Not only are bangs always a terrible decision, but doing this weird pull my hair back but let it also wisp into the breeze further accentuated the hard bang. You’re in timeout, Margot. 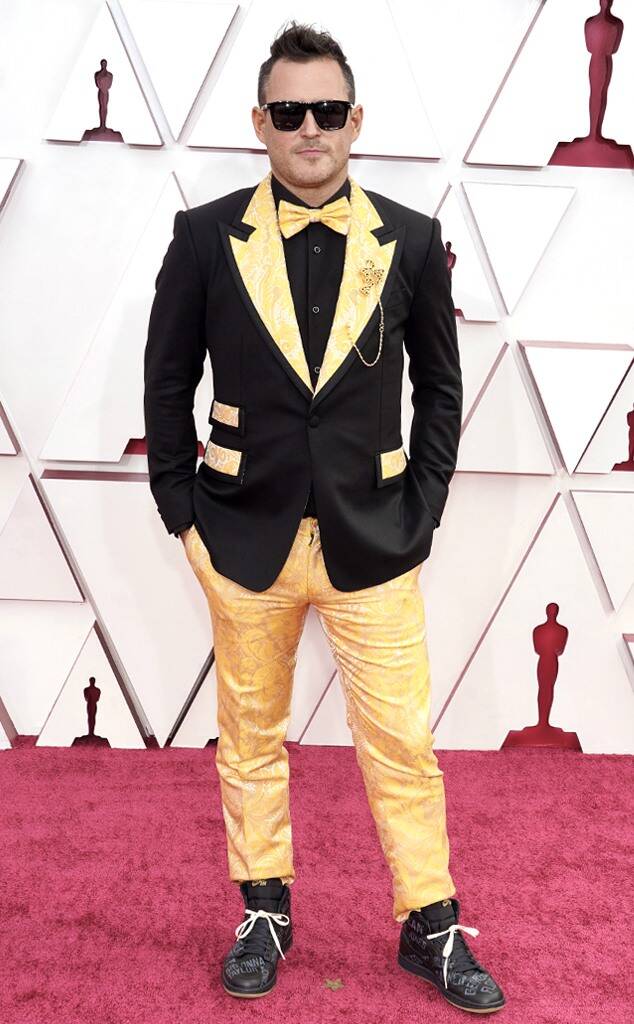 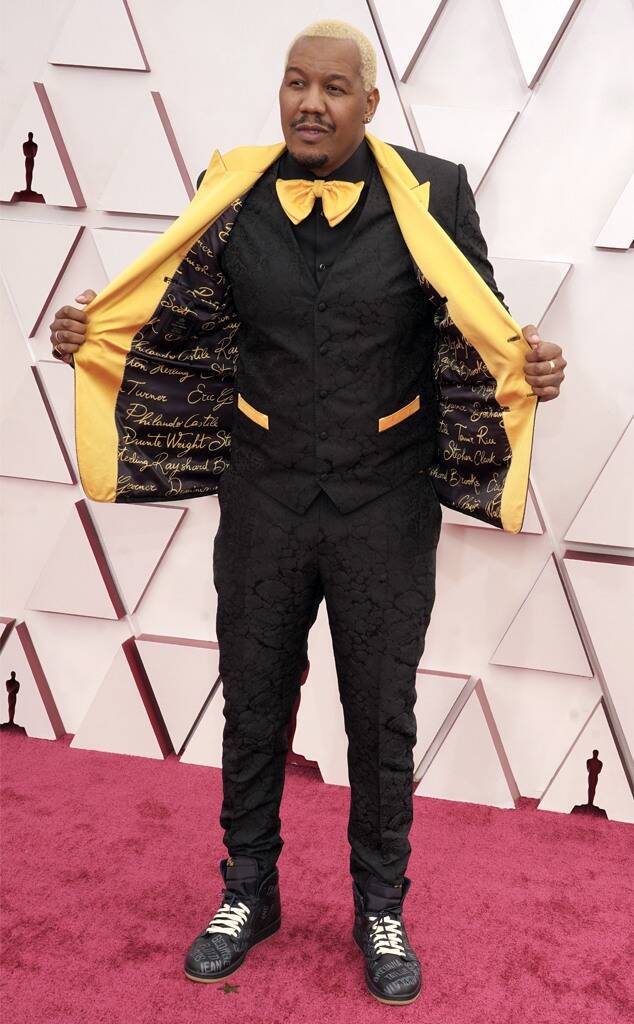 It’s important for me to note that not one but TWO gentlemen dressed like actual f*cking bumblebees. It’s important because I was personally victimized by a carpenter bee this week in my own home and NOW THIS?! This feels like an attack and I will not stand for it. I was forced to sleep on my couch hiding from this fuzzy monster as it took over my bedroom and then just when I thought I was safe after three days of not hearing his aggressive lawnmower buzzing, he dared to reappear casually to remind me that this is his apartment now. I trapped him under a glass and HE IS STILL NOT DEAD, Y’ALL. This bee has been pacing the circle of the glass for DAYS now as if he’s simply doing time for his actions. I’ve basically become a sociopath bee murderer slowly torturing this mf’er to death all because I was terrified to swat at his crunchy body. And although I’m sure there’s some meaning behind this duo of black and yellow tuxes, the real meaning is that I will forever be haunted by this bee who lives underneath my desk now.

Spraypainting your crocs gold does not make them couture, QUESTLOVE. Also your outfit looks like something Rosie O’Donnell would wear circa 1998 when she had her own talk show. Boom. Roasted.

Had no clue Regina was kicking off the show (or that there was no host) until a camera dramatically followed her on a very long walk into the venue and up onto the stage. Her strut was a 10/10, this dress is like a 5/10. The jewels look tacky and those sleeves…WOOF.

Color of the dress is great, WAY too much fabric and that.HAIR. WHAT IS HAPPENING IN HOLLYWOOD?! Are these actresses showing up in character and I just missed the memo? Like on what planet is that hairstyle attractive?!

A glitter turtleneck. That is all.

This feels a little trashy for the Oscars. This is more a VMA’s dress. 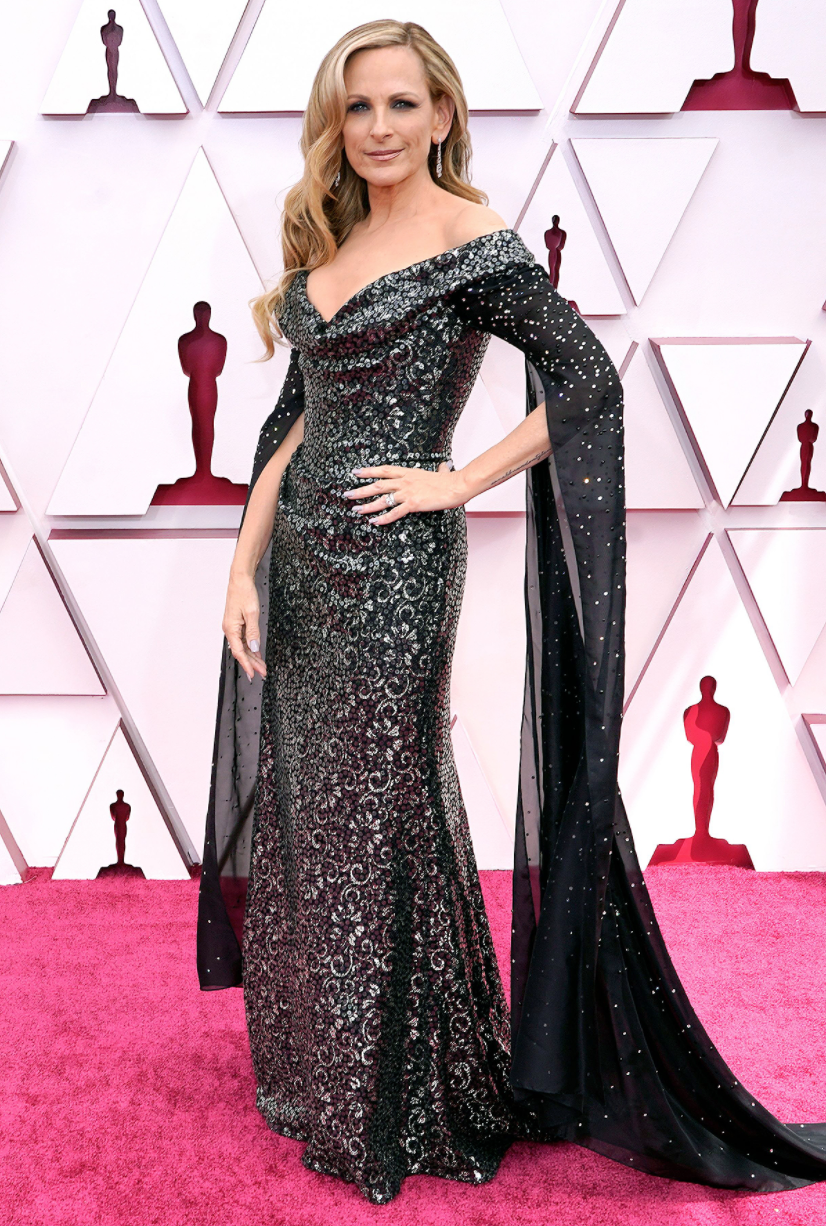 Girl looks like an evil Disney witch with these textures and sleeves. All that’s missing is the Maleficent headdress.

Why the hell is she wearing almost a full length dress with pants underneath? This is LA so I would assume it’s probably 75 degrees there. Is this an old people thing? Do their shins get chilly? (PS I’m MAD that I finally cut the cord on the Oscars with an hour left last night because I couldn’t possibly bear one more minute and THAT’S WHEN Glenn Close decides to twerk that pants-covered ass and curse up a storm. WHYYYYYYYY.) 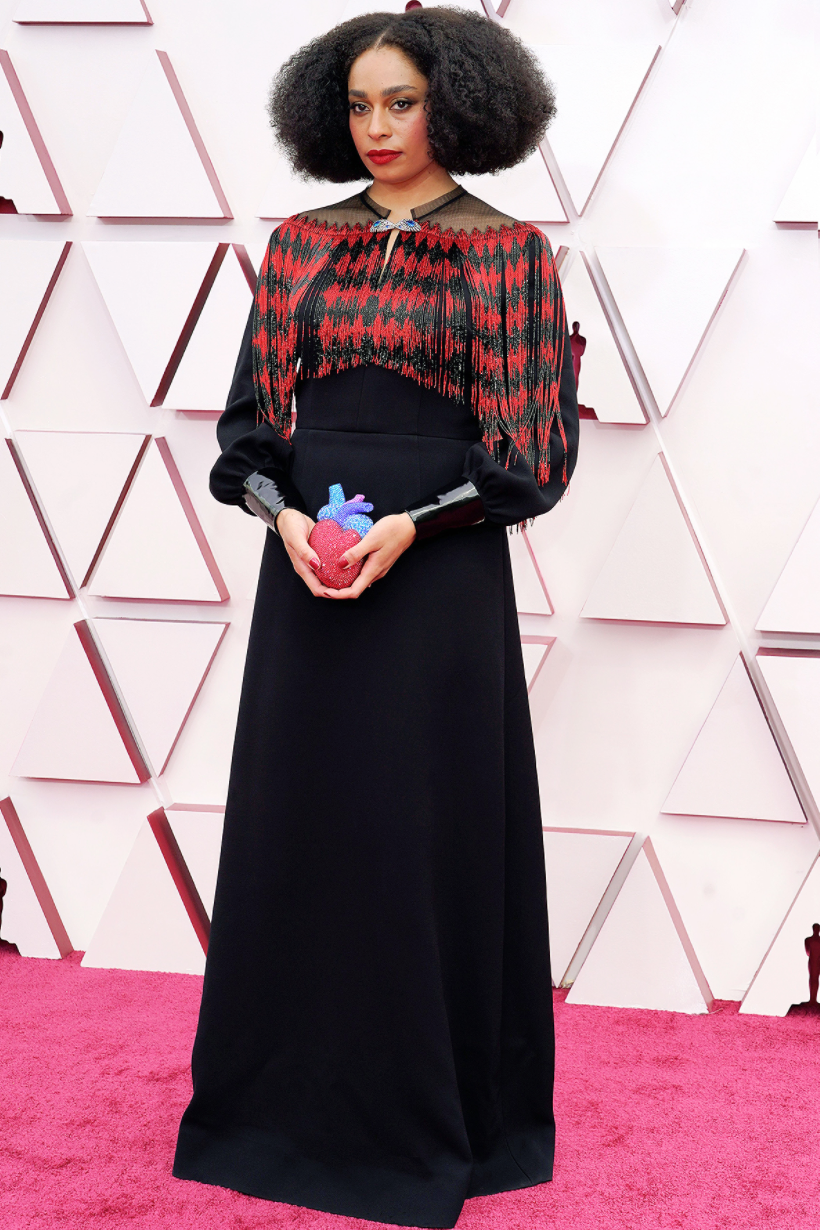 Another Disney villain situation and oh my lanta, is that a HEART in her hands?! Creepmaster 101. 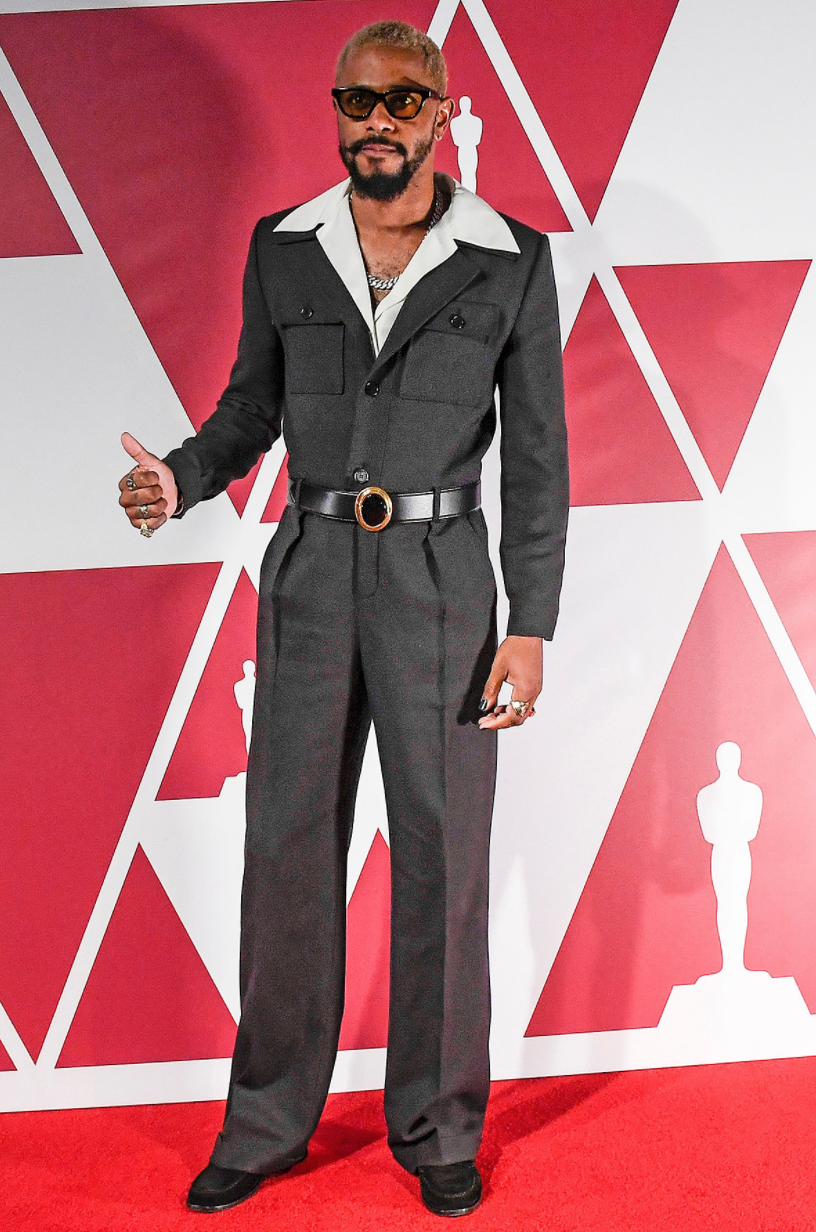 Again if I’m not in love with the cutouts of the coral dress, I’m not down with this lingerie lewk. Showgirl City,  Population: Andra.

Sorry for the tiny pic but the full sizer was a side view and I wanted everyone to see the full drama that is a bandeau top and skirt. Too much drama, if you ask me. 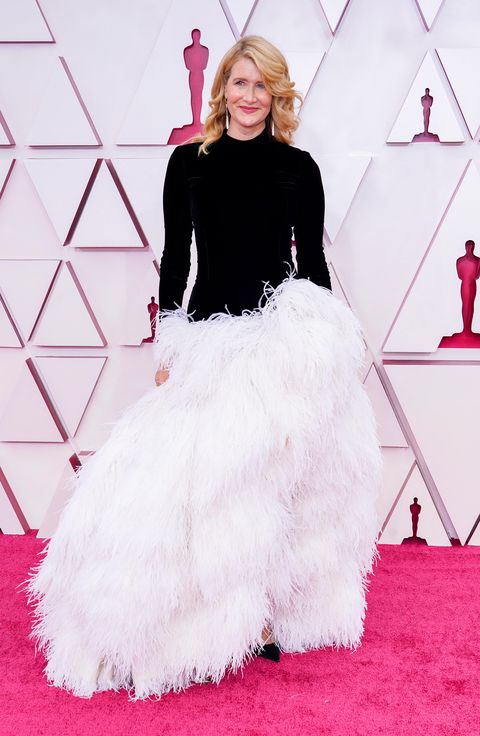 LAURA YOU BLACK SWAN QUEEN, YOU! 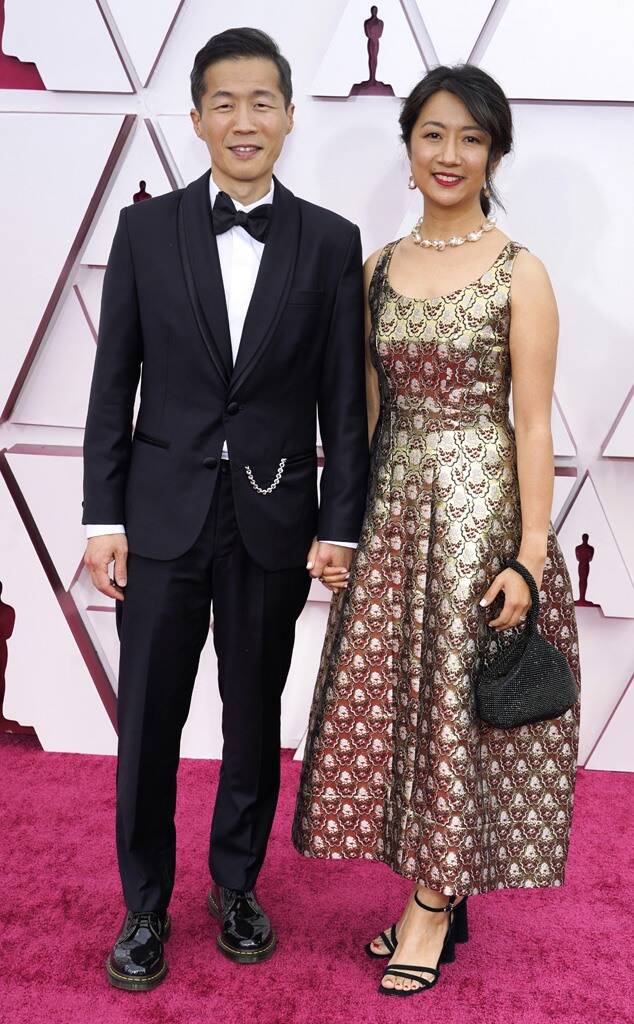 Both look great but I’m really digging her shiny dress with the red lip.

This entire outfit screams I have a library in my home and I really like it a LOT. 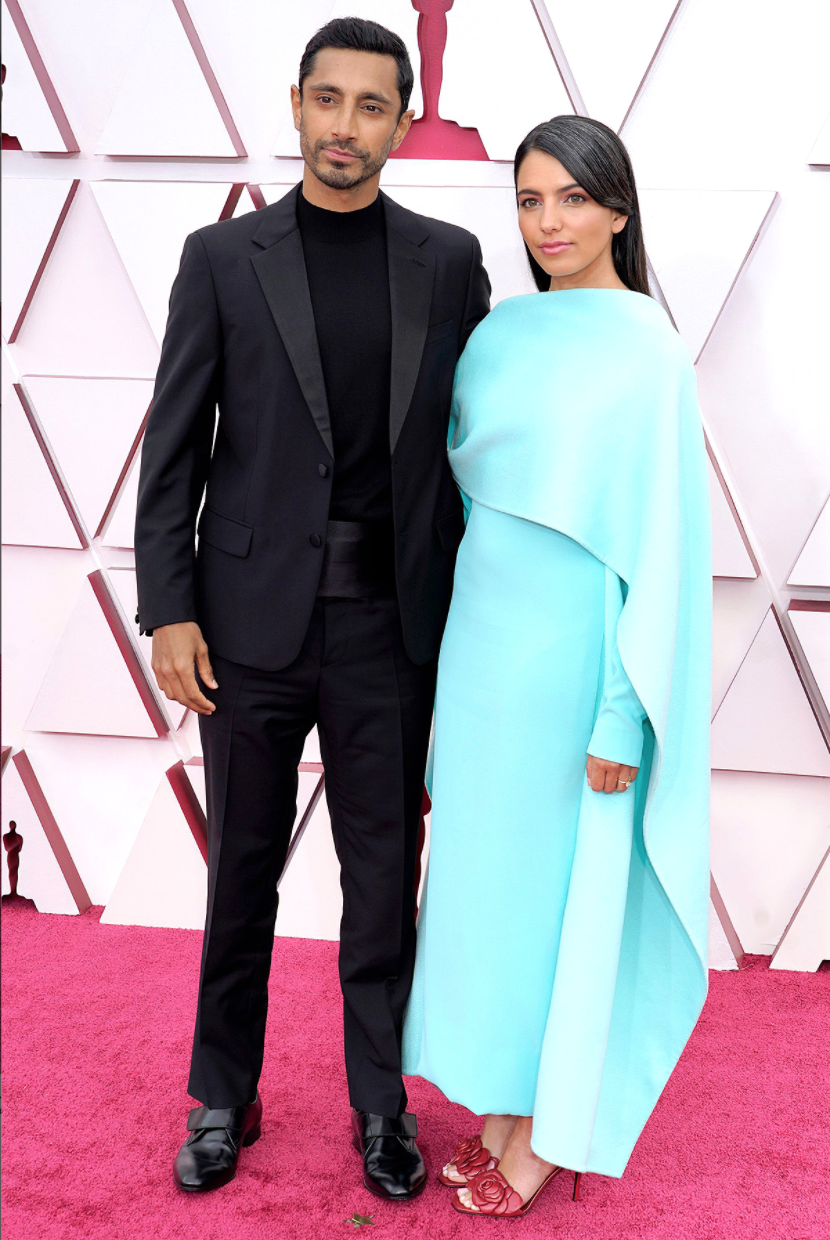 What a babe soda power couple. Even better, Riz fixed his lady’s hair for her on the red carpet so she’d look flawless for the paps without a hair out of place. What a keeper.

This begins the hot red portion of the evening and everyone who went red absolutely crushed it. Also, not for nothing but her cleavage looks like it’s painted on. 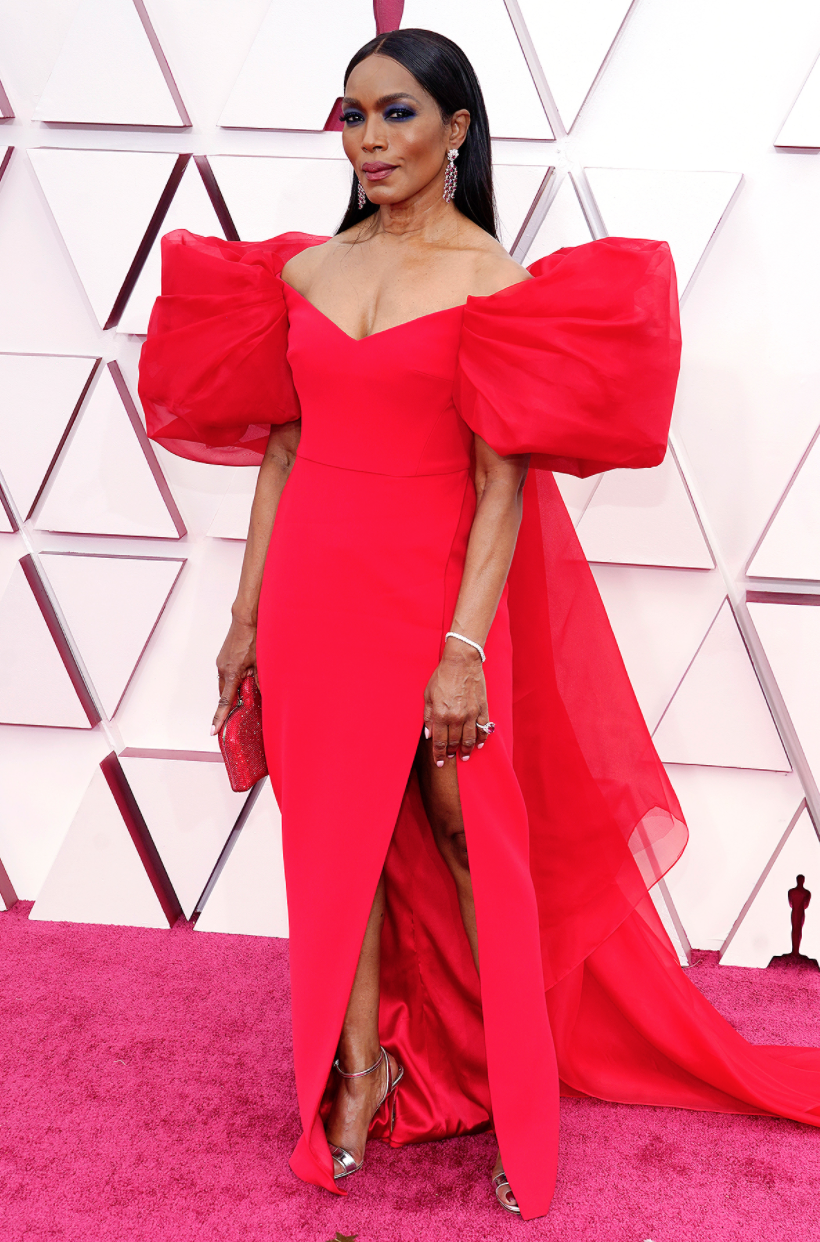 The sleeves are preeetttty ridiculous but they somehow work with the sleek shape of the rest of the dress.

Ooh baby those cutouts are sexxxxxy. Loving the details and the shape of this gown.

What a magical, whimsical forest fairy! Bonus points for her referencing an acceptance speech she wrote when she was younger and thanking her supportive husband Zack Morris. Brits are so casj cool and funny. I want to be her friend.

Other than bumblebee dumb and dumber, not a whole lot of dashing man fash on the red carpet so when I saw this hot pink jazz I got VERY excited. And the sparkle on top of that?! I basically had to fan myself.

These two look hot as hell together and they’re each serving a whole look. 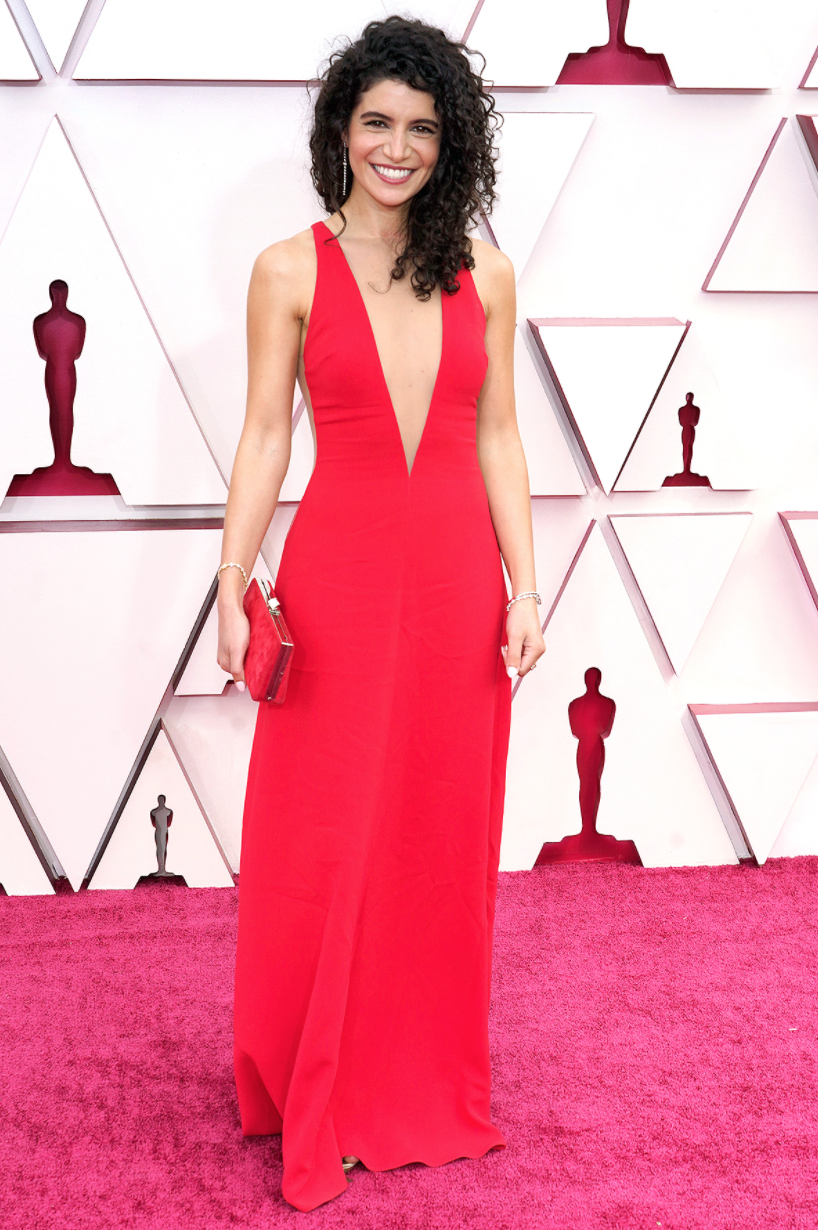 Gun to my head I could never come up with a name for this individual but she DID get the red memo and I appreciate the shit out of it. 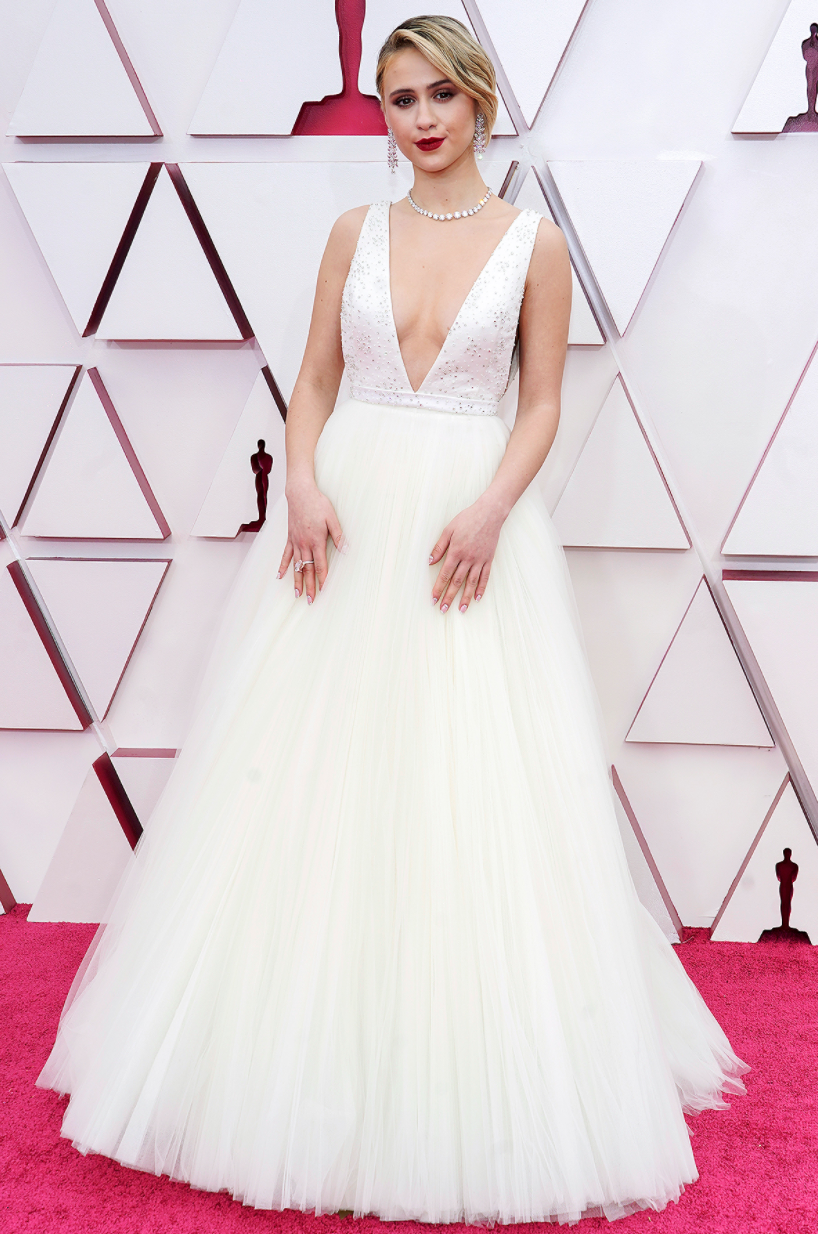 Close call – this was almost my pick for best look of the night. I can never hide my boner for princess gowns.

Credit where credit is due for this man scarf POPPIN’ that golden accent.

I’ve definitely waxed poetic before about how much I respect a hoodie as a fashion statement because I was repressed as a child from wearing my hood up around the house. But ON TOP of that we’ve got an electric blue jumpsuit that is BO$$.

Could definitely do without the tummy peekaboo but very into the dramatics of the dark lip with a pastel gown. If you added a hood to this look I’d be foaming at the mouth. 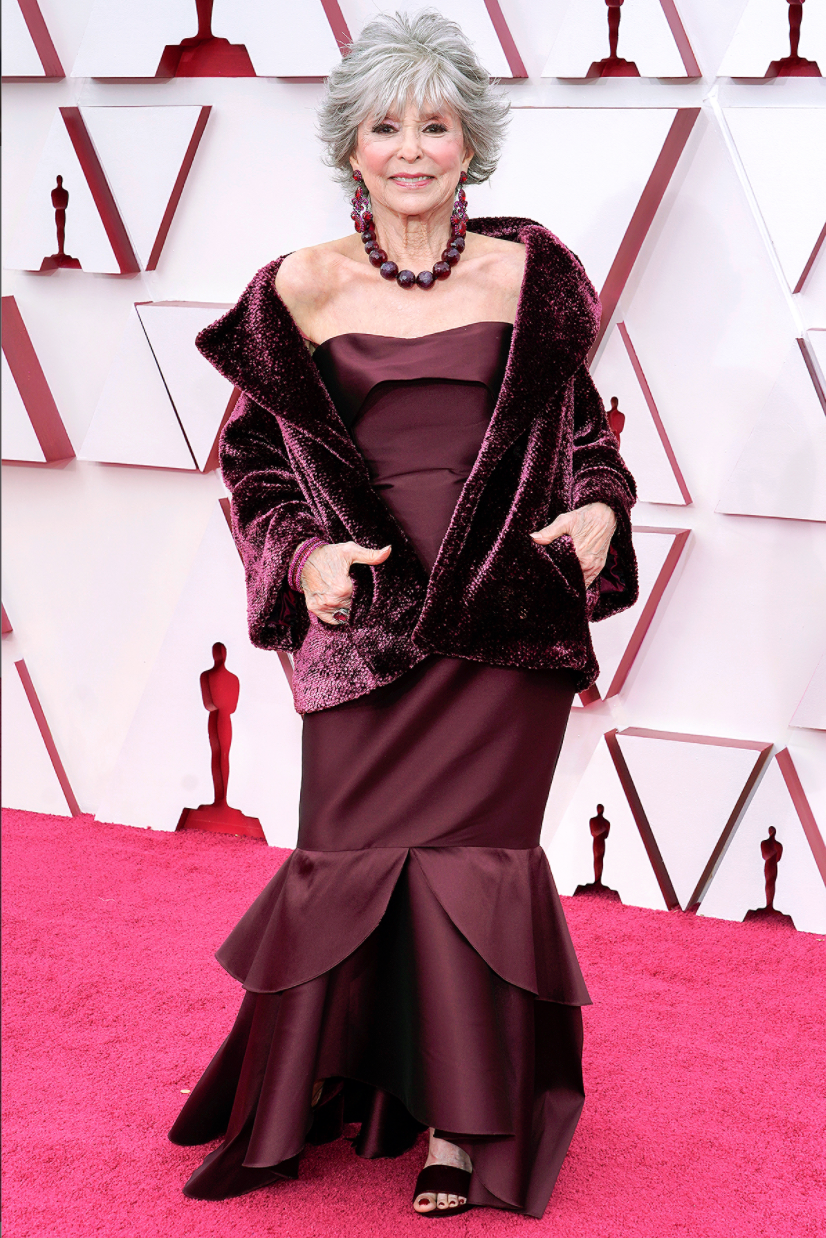 I’m living for the color coordination here. As someone who changes her scrunchie to match her loungewear perfectly every day, I love that shes’s maroon from head to toe. A true maroutfit.

She IS an Oscar and I gasped when I saw this puffy skirt that could most definitely be hiding another person underneath it. What a flawless statement.