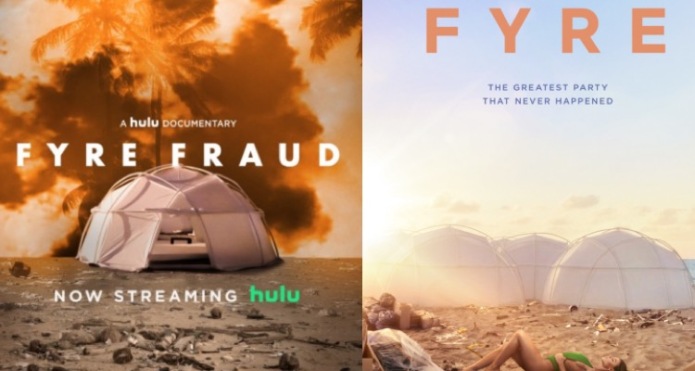 As I’m sure you heard, Netflix and Hulu chose a particularly wintery-don’t-wanna-leave-the-couch week to drop two dueling documentaries on the horrific dumpster fYre that took place a couple years ago. As originally reported on the Weekly JUice where I pointed a heavy finger at Ja Rule (or Ja, as I learned his “business partners” and friends call him), this music festival was created to be an exclusive event on a private island for rich millennials, except for the fact that when they all arrived their accommodations were FEMA tents with no food or water and whoopsie there were also no musical acts booked. Obviously Twitter rants ensued and all of us poor people who would never drop 5 grand for a trip to an island music festival sat in our office chairs with tears rolling down our cheeks from laughing uncontrollably. Just me? Whatevs.

Each doc provided a behind the scenes view of what led to this. Spoiler alert: the most stupidity you will ever feast your eyes upon. Although both had different footage/interviews, if you’re looking to just watch one, Netflix takes the cake. They partnered with Fuck Jerry, the media company that had all of the juicy BTS footage and boy was that worth a watch. Hulu offered an exclusive interview with the mastermind dirtbag himself, Billy McFarland. Although if we’re being real here, the Billy that filmed himself wanting to document his creative process (partying) is FAR more telling than the Billy that was paid to sit down for a formal interview and chose not to answer half the questions. Jus sayin. Strap in for the best and most ridiculous revelations from the two docs where my jaw had a permanent residency on the floor.

1. Andy being extorted by someone half his age to suck Customs D. 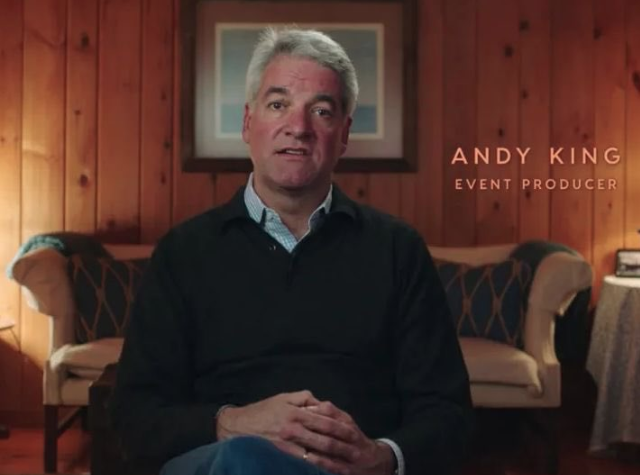 Andy. Who hurt you? Some view Andy as a ride or die. I view him as a lil bitch who is literally crying every day but still cleaning up messes from someone half his age. The only logical conclusion is that Billy has something on Andy. Judging by Billy’s character, my first assumption would be some sort of financial fraud. Anyone who willingly comes running every time Billy wah wah’s about the latest disaster CANNOT be doing that just because they like the guy. When he casj AF drops in the, Billy asked me to suck the Custom guy’s D and I swished around some mouthwash and flew right over there, I was literally in shock. HOW. WHAT. WHY. Andy is 100% the person whose still visiting Billy in prison and can’t wait until he comes out so that they can embark on a new business venture together.

I think about this at least 4 times every hour pic.twitter.com/62DqZKmySM

I couldn’t pick just one jaw dropping aspect of Billy and Ja’s time on the island leading up to this disaster so I broke it down to my favorite three. Basically all of these moments fall under the umbrella of the fact that this crew did NOTHING but party for the 3 or 4 months leading up to this event. The fact that it’s actually a good event idea but would take 1-2 years to build the foundation and these jabronis threw out a promo video and sold tickets 4 months ahead of it and didn’t plan one single thing is so frustrating in itself, but then to watch their “visits” to the island contain jetskiing, drinking and hearing Ja Rule give stupid cliche party toasts made it 1 bazillion times worse. At one point in the Hulu doc, Ja just does blow on camera. Cool bruh.

a. Billy spilling beer on the map that says this won’t work

The two masterminds recruit a guy who knows the island and he’s like hey look at how much space you need versus how many tickets you sold, this maybe isn’t a good idea. And Billy spills his beer on the map. Then fires the guy. Sick.

Aforementioned guy who actually sounded pretty reasonable when he was like Hey Billy, this won’t work is actually the SAME guy who apparently learned how to fly a PJ based on like a video game or simulator and all of the douchebags/influencers who came every weekend to party were like OMG he gives the best zero gravity rides. No, morons, you were just getting in a small aircraft with someone whose never flown it before (probably drunk or high) and letting it fall from the sky. The wild things rich people do for kicks. 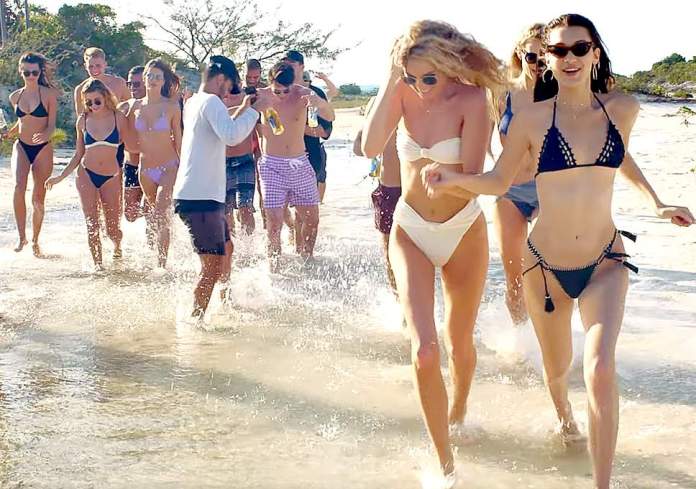 This point was actually more so because of the Bachelor and the fact that pig island is marketed as this adorable fun thing but pigs are actually gross and being stuck on an island with them probably isn’t fun at all. The porkers going after all these dainty models’ bholes and them running and screaming was high entertainment. PAY THOUSANDS OF BUCKS TO COME TAKE INSTAS WITH PIGS LIKE THESE MODELS. Notttttttt.

Look we all heard about the shit show that was people showing up and not having any housing or food. And we ALL remember the cheese sandwich. Probably the most reported aspect of this entire festival. But what was learned through these docs is that if you bring a bunch of entitled young adults to an island in another country, fill them with booze and then basically release them into the wild to find sleeping arrangements for the night, they’re going to act like animals. At first it was like everyone’s drunk and trying to find a tent and a mattress, ahhhh! Then it escalated REAL QUICK to:

and then that went rrrrright into peeing on mattresses and looting. WHAT?! How is this a normal reaction?! Obviously not one police officer in sight. Supes normz for thousands of people coming to a music festival.

4. Do I want to be an influencer when I grow up?

I’ve never heard the word influencer more in my life and I’d feel good about going the rest of my life never having to hear it again. I know I probably have no leg to stand on here, as I blog about pop culture, but SERIOUSLY HOW IS THIS A CAREER?! Not only is influencer a career, but these influencers, most of whom I’ve never heard of were PAID to come to this festival. Just so that they could Youtube, and Insta and whatever else live stream their trip. The portion of both docs where it shows random internet people just live stream narrating their flight made me want to set my apt on fire. Mostly because I too would like to be paid $250,000 to post an instagram just telling people to go to a festival. YEAH THAT’S RIGHT KENDALL JENNER, I CALL BULLSHIT! Girl was never even affiliated with this festival but had no issues accepting a wire transfer in exchange for one insta post. Woof. Barf everywhere. Ok before I have a full on mental breakdown about how many people in this world probably call themselves influencers, let’s go right ahead and call them out for DEFINITELY having enough money and not sending it right to the Bahamians that were screwed over. 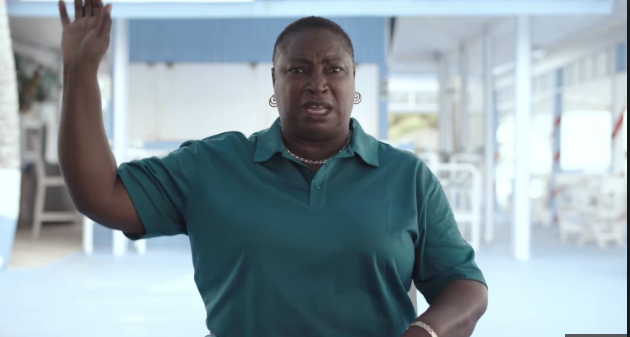 Instead, we all (I’m using we in a very general state, I did not put any of my personal money up) raised the funds for this sweet, sweet woman to have a savings again. So you owe us Kendall. YOU OWE US.

By far the most shocking thing out of this whole shit show, the thing that I still couldn’t get past is Billy getting INDICTED, doing some jail time, being out on bail and starting up a fresh scam with the SAME EXACT CONTACT LIST AS FYRE FEST. Not only basically making it the most obvious thing in the world that it’s him scamming again for tickets that don’t exist and using a frontman to make the phone calls, but HE FILMS IT ALL TOO.

“Hey are you guys looking for cold hard proof that I can’t stop extorting people? YOU BETTER COME FIND ME (in my penthouse, with a full video shoot setup, using the same phone number and email I’ve always used.)” – Billy, probably. Also shout out to the Hulu version for letting us know that he also tried planning Fyre Fest 2018 immediately afterward as well. You and Ja deserve each other, Billy.

Honorable Shout-out for no particular reason:

I genuinely would’ve appreciated a phonetic spelling of this name.

Do you feel dumber having read that entire blog? Great. We’re all on the same page now.