Sorry for the hiatus, but like, you can actually blame Hollywood for not having enough gossip for 5 headlines each week. I know you’ve missed me though so don’t you even fret. I’ll force five worthy stories if I have to. Obviously the biggest news in the past week has been the birth and then finally name of the latest royal beeb. They really held out on releasing the name until today, which seems pretty dumb considering there’s only like 5 options for a royal name based on family names. The real storyline here is how Kate looked like a total babe soda 5 minutes after giving birth. I can’t even imagine knowing that you’ll walk out of the hospital, post-pushing a human out of your vag, to a swarm of paparazzi and you have to look profesh AF because you’re a royal and the Queen will hate you if you don’t.

Kate nailed it obviously. As she always does. She looked better than me on a good day by miles and that’s why she’s a Duchess and I am not. If I ever allow a child to destroy my downstairs, I will stay in the hospital unshowered the maximum amount of days allotted and then will spend the first months wearing leggings and oversized sweatshirts. Hell, I’m not even pregnant and I wear that exact outfit on a daily basis anyway, so really I’ll just maintain my current maternity style.

2. RIP Avicii. Another weekend tidbit of news but it also was just updated and confirmed that he took his own life. Sad news in the music world for everyone who likes a little WOMP WOMP in their tunes. The fact that he committed suicide at the age of 28 makes it real eerie. To distract from this depressing news, I will tell the tale of when his banger Levels came out and everyone on the planet played it 24/7 and acted as though they discovered EDM music. It became a running joke among my friend and I to just send each other a text or a tweet and be like omg have you heard that song Levels?! ITS SO GOOD. Unfortunately we can no longer make that joke without it being in bad taste. So instead, treat your ears to the masterpiece that is Levels and think of a 19 year old Julia fist pumping in a trashy homemade neon shirt that covered my shorts thus making it look like I decided not to wear pants at the Barstool Blackout Tour. I not only lost my fake ID (sorry Nikki) that night, I also lost a little piece of my dignity.

I was curious to see how Ed could’ve made a music video out of the second most depressing song on Divide (Supermarket Flowers is obviously the first) and it turns out even though he used puppets, muppets and balloons, it’s still DEPRESSING AF. I think a single tear rolled down my cheek as (spoiler alert) his balloon lady floated away at the end. Damn, Ed. Guess he needed to bring everyone down a notch after Perfect swept the world as most romantic song ever and every young couple’s first dance song at their wedding.

4. Twitter Philosopher: Kanye West. That giant weirdo Kanye has decided to make his triumphant return to the Twitterverse to babble nonsense all hours of the day like he’s making proclamations, or according to him, writing a book in real time. Here’s a smattering of his best tweets to make you giggle to yourself or want to smash your head into your keyboard that this guy is famous and associated with those godforsaken Kardashians…and we’re all poors. He even dragged classy guy John Legend into the mix. No one is safe. 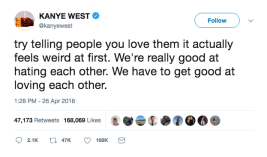 5a. The Sitch to get Hitched.

I’ve been really diving back into the world of Jersey Shore lately. Mostly because I’m back on that funemployment grind and MTV plays 12 hours of Jersey Shore a day. It’s a real eye opening experience to be watching this show as an adult because when it came out I was 18 and thought this crew was living the dream drinking on a boardwalk and working at a t-shirt shop and now I look back and see Snooki getting hammered with her sneaker slippers on in public and Ron/Sam beating each other up and I wonder where my priorities were as a teenager. Either way, obviously they’ve made a comeback as grownups with children still going to clubs in Miami and The Situation has marketed his engagement to the J.Shore fans. As I read the story and realized that this was his college girlfriend, they broke up when he was on the show and got back together afterward I TRULY wonder if she ever saw even one minute of this show because the Situation was disgusting. He was an asshole and he banged a new girl every single night and then probably kissed his muscles before he kicked them out of the smush room. TRUE LOVE PREVAILS I GUESS.

5b. Sisterhood 3! Another preteen throwback for ya, The Sisterhood of the Traveling Pants is probably going to have a third movie because the whole gang of actresses are still BFF’s and Hollywood loves a sequel.

This is great news for me. As an avid reader of the series, I went into a depression for a whole week when Kostas knocked up another girl. DAMNIT KOSTAS YOU GREEK WHORE. I also tried to copy the traveling pants for a summer with my besties except it was a traveling jean skirt and MAN did it see some drama. Just kidding, I wore it on my family vacation and wrote FB in a heart near the pocket because I thought the ferry boy was cute. Should they make a movie about my wild summer in the traveling jean skirt? Most definitely, but I’m still looking forward to this third installment and will be there for it when it gets released.