The episode starts off with a ladytestant saying, “How’s everyone feeling today?” And from the sea of bitches, one solo Valley girl dramatic voice sounds, “I’m emotionally and physically DRAINED.” Are the girls trolling now? This girl whose name I can’t possibly remember didn’t actually say that in that way and be taken seriously, right? HERE WE GO.

It’s All About the Ring with Maquel, Jacqueline, Lauren B, Tia, Marikh, Bekah, Bibiana, and Krystal

This is the GLOB (Gorgeous Ladies of the Bachelor wrestling) date. WOW. G-L-O-B. You’ve really outdone yourself, ABC. Today’s guests are two wrestlers from GLOW…a legit acronym and something more appeasing to the ear than GLOB. These OG wrestlers (like pre-Total Divas) harass the ladies for laughing and insult them with the intent of pulling out their wrestler attitude. Except oops, it backfires with Tia and Bibz, who can’t take the heat and leave the ring crying. The gals are like SEE YA, YOU WEAK GLOBS OF SHIT. Of COURSE Bekah’s the cool chick trying to become a pro wrestler and loving every minute of the date.

Ya boy Kenny comes back to slam Arie around the ring as the opening act while a bunch of these dum dums in shitty costumes watch from the sidelines. Highlights from the girls fighting: Bekah the black skank cat vs. Maquel the hideous lunch lady who beats her with a literal lunch tray. Krystal is a leopard of course. And Marikh pulled bills out of Lauren B’s underwear.

Later, Krystal makes out with him first then asks if she should be aggressive or hang back at group dates. Arie told her to be herself so she took that as, be an asshole. Bibiana complains about Krystal. Bekah talks about how breakups are good because it helps her eat better and hit the gym. Did I mention that I find her INCREDIBLY annoying? Her and Krystal can kick rocks. Ugh. Bekah gets the rose.

You Had Me At Merlot with Lauren S.

“I think it’s going to be a date about wine” MY BRAIN CELLS HAVE MELTED AWAY.

Later, Arie asks what “came to coming here” for Lauren, and she replies with 15 different stories that don’t tie together. Ramble city, population: one of the Laurens. She admits finally that she feels like she’s not being herself and he’s making her nervous for no reason. So that’s a weird way to call curtains on all that word vomit. Arie grabs the rose to be like I can’t give you this because I don’t even know. But really. That’s what he said. He tells the camera the spark isn’t there. Probably because he wanted his ears to fall off. Cut to the MOST DRAMATIC suitcase pull ever and Caroline dissolving into a pile of tears. It’s week three. Calm yourself, Iago. 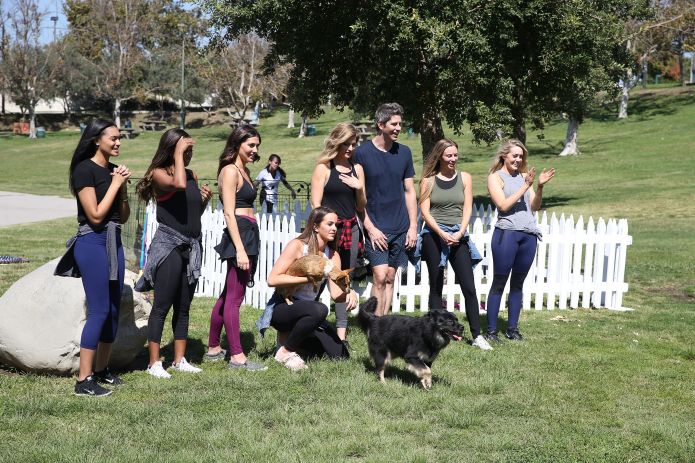 We’ve got a dog “show” on this date. Would’ve been a much better date to just have a giant puppy pile but who am I to judge. Count Analiese out for any puppy interaction because of course we have another traumatic flashback to her almost losing her eye to a dog bite as a child. In quick summary, all of the ladies suck at wrangling pups onstage. Not even Fred Willard’s commentary can save this dog shit date, and that’s a true shame.

That evening, Annaliese has a traumatic experience with Arie. She doesn’t get kissed. And Chelsea interrupts her for a smooch. One day we will watch a black and white flashback about this with a sad heartbroken soundtrack. Chelsea gets the rose.

Bibiana bitches about not getting time still because that’s what she was put on this show to do. Bekah tells Arie that he likes her because she doesn’t need him. His response is, “You’re kind of nailin the, nailin the…nailin it.” Good talk. You’re getting flustered by a 13 year old, Arie. Seriously, check her ID already and get this over with.

Analiese asks for a kiss and Arie replies “I just don’t think we’re there yet.” AWKWARD. Then makes out with the taxidermy chick. DOUBLE YIKES. The girls coach Analiese to go back and put him on the spot and he’s forced to dump her pre-roses.