The stakes are high as the first legit awards show of the season and my judgements will be harsh. I make no apologies and must reiterate that I literally know nothing about high fashion and these are all my sassy opinions formed after one glance. I also feel compelled to point out that while these women probably starve themselves 90% of the time in preparation for these few moments walking a red carpet, I am sitting on my couch, unshowered, shoving pizza into my mouth and telling them that they look ugly. All the credibility in the world, obviously. 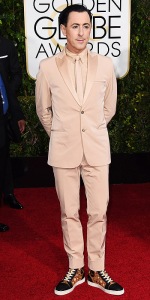 Amanda Peet looking like she wrapped herself in a bedsheet. Not flattering.

I guess this is very Bill Murray…slob kebab style. 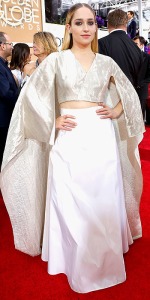 Jemima Kirke looking like she stepped out of the 1990’s, only thing missing is butterfly clips and foam platforms.

Hey Kate Mara, this could’ve been on the best dressed if you didn’t throw in that stupid belt.

Katie Cassidy leaves absolutely nothing to the imagination. Do less.

Keira Knightley. WHAT WERE YOU THINKING? Wins worst look of the night, year, possibly ever.

This is so blah, baggy and unflattering. Also off the shoulder is so 80’s duhz, Kristen Wiig.

Lorde in the baggy pants suit. (She probably borrowed that crop from her cheerful bestie Tay)

BLAH BLAH BLAH. We all know I think Maggie Gyllenhaal looks like the homely aunt at every public event. (her and Lena must be attending the same wedding circa 1992) 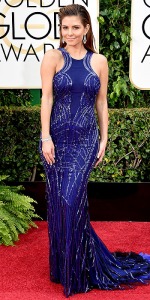 Maria Menunous with boob patterns and slicked back hair. 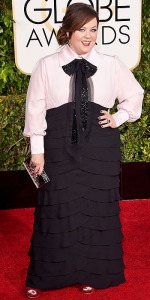 I read somewhere that Melissa McCarthy recently lost like 50lbs…this outfit does NOT show that. Also, waitress.

Rosamund Pike wearing a spaghetti strap dress that is just too much and makes her look top slops. 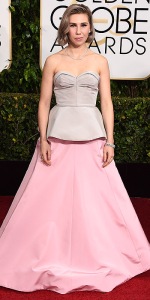 The Clooneys make their red carpet debut and it’s lackluster. The dress is just fine..the gloves are stupid. ARE YOU ABOVE US OR SOMETHING, AMAL?

Is Eddie Redmayne wearing a velvet suit? Kinda lame. His wife’s dress is pretty so that’s how they landed in the middle. 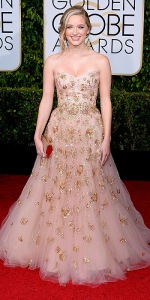 Miss Golden Globe Greer Grammar kind of looks like she bought this from a prom dress store. 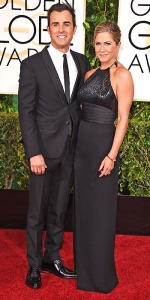 Meh=Matthew’s scraggly beard, the top half of Camila’s dress.

I truly hate to knock my favorite hosts of all time, but these outfits are not doing it for me. Fingers crossed for some improvements in the many outfit changes during the show. 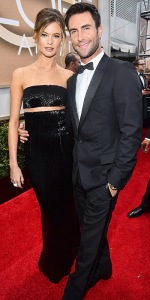 Real Talk: Has Adam Levine ever not looked bangin? Answer: No. 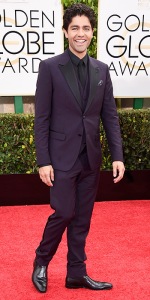 Not in love with the hair on Anna Kendrick but the dress is on point. 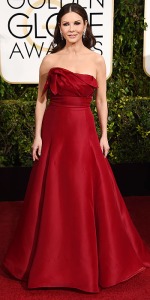 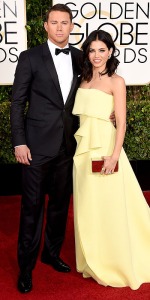 Anna Faris stepped it up and she’s not even hosting this one. Pratt looks good without trying.

Chrissy Teigen looking like a smoke with a sassy pony.

Dakota Johnson with the classic disco ball dress. Still not hot enough to be in 50 Shades but I digress.

Pacey and Diane Kruger killing it as always. 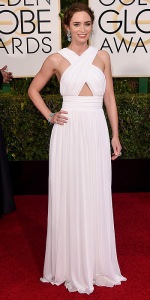 Emmanuelle Chiriqui legit does not age.

Gina Rodriguez from the CW show I thought would be cancelled, loving the fringey bottom of the basic black.

JLo still on a mission to remind everyone that she may be 45 but she sure don’t look it. Legs and tits for days. 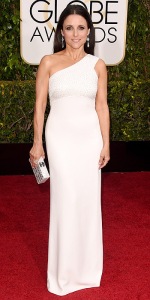 Julia Louis-Dreyfus, another one who never looks her age.

I respect the hell out of this NYE party frock.

Kate Beckinsale almost won fave look of the night but the bun didn’t complete the look for me. 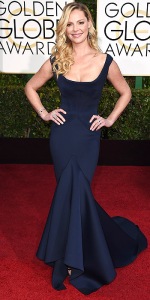 COULD KATHERINE HEIGL BE SKINNIER? DAMN.

Katie Holmes looks like she did in the Dawson’s finale and I LOVE it.

I hate this dress so much that I love it. I can’t even explain that.

Lupita kills red carpets. Always on fleek (the kids are saying that these days…) 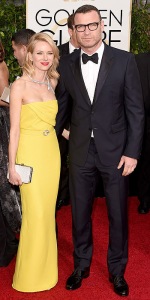 Naomi Watts with a super cool snake necklace and another great yellow. 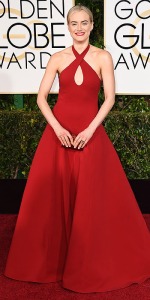 Hate the hair, love the dress. 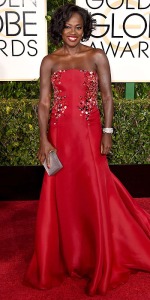 And naturally the most coveted of honors-the winner of my fave look of the night is… A TIE. 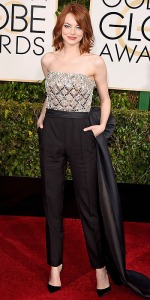 NEVER though my fave look would be a jumpsuit but I LOVE this look, even the capey thing in the back. Emma Stone kept it simple with jewels and hair and let the sparkle top do the talkin.

Reese Witherspoon had a big year with films and looks GR8 in this simple slimming gown. Less is more (also can you tell I’m into the sparkles?)