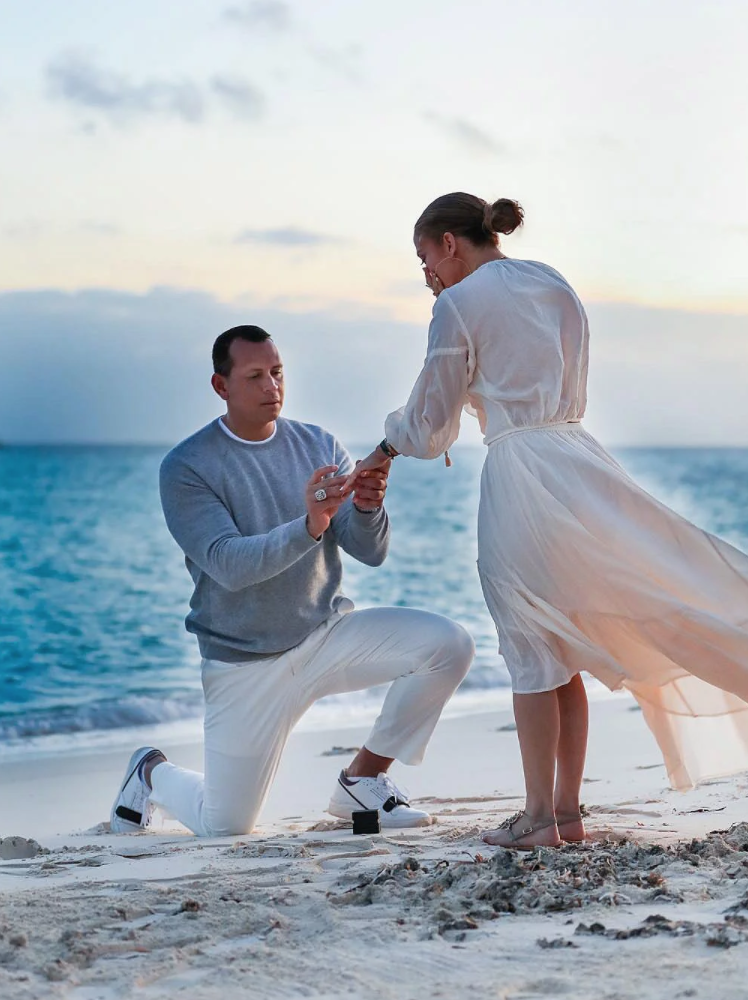 Pretty torn up about the JLo Arod split but mostly because she didn’t text me about it first. Please respect my privacy during this very difficult time.

Obviously this is NOT breaking news. A full ass month ago we found out that JLo and ARod could not make it to the altar despite their matching two syllable hoodrat nicknames making us all believe they were indeed soulmates. As soon as the news broke, they tried to walk it back saying they weren’t over, just working through a rough patch. Mmk, guys, whatever. This was obviously them trying to control the story when they’ve probably been separated for months. As I hinted before, the fact that I didn’t find out from a personal text from my girl was the most hurtful part of this split. But now, they’ve made a joint statement. (Again…still waiting on my text…)

In summary: Couples therapy couldn’t save them once the world knew their love was dead and also staying together for the kids apparently wasn’t working. Good thing their deal didn’t go through or they’d have to stay together for the Mets too. YOIKES. Anyway, despite the jokes, these two did seem like they were a match made in heaven and I was happy that Jenny from tha block who can’t seem to stop getting engaged and/or married finally found her forever Macho. But alas, love is pure garbage, even if it don’t cost a thing. There were rumors of cheating…my first thought was who would cheat on that perfect specimen but my friend Kat makes a valid point that although I don’t want to face, I’m forced to: at what point does JLo look internally and wonder why she can’t hold down a mans.  I’m there to comfort her if she needs it–I’m just a text away but by the looks of things she ain’t the one who needs comforting. ARod posted this story on his Insta when the news broke:

SOMEONE DO A WELLNESS CHECK ON THIS GUY. Listening to Fix You while he looks at pictures of the two of them?! SHEESH. He’s one step away from the ending of A Star is Born. Chris Martin’s about to have blood on his hands for creating an absolute SMASH to cry to. But seriously though, someone get eyes on ARod before he crumbles and starts tweeting Peyton quotes from One Tree Hill.

Fun Fact: I already had Colton’s 1st ABC headshot locked and loaded because once upon a time I used to blog Bachelor Nation until they all pissed me off so much that I had to force myself into early retirement. AND THIS SHIT?! THIS IS WHY. Here’s the lowdown for all y’all (me now included) who no longer invest 19 hours a week to this godforsaken franchise. Colton was a contestant on the bachelorette and then eventually he was the big cheese, the bachelor. His main “storyline” was that he was a big booty big ole Virg. And if there’s something reality TV loves, it’s honing in on the adults who have never had sex, making them feel suuuuper ashamed and embarrassed about it, then trying to get them to sex it up in a fantasy suite for a full closure story arc. To my knowledge, Colton didn’t fall into this trap and remained free of bonetown throughout his whole season. He left single and pursued Cassie who left his season early because she wasn’t ready to get married. They dated for a while and just recently broke up a few months ago where Colton then proceeded to stalk and harass Cassie until she took out a restraining order against him. Now he’s gay. He did an exclusive interview with Robin Roberts where he comes out officially and is living his truth now. Listen, Colton. I’m happy for ya, and I’mma let y’all finish but being gay doesn’t excuse being a total shitbag to your ex-girlfriend who was probably already reeling from the fact that you were pretty much never attracted to her. He tried to explain it away as being in a “dark place” and gave like a half-assed apology. So not only do I have a bone to pick with that, but also…buddy, take a beat and reflect on yourself and this new chapter of your life. In the past five years he’s been on every ideation of Bachelor Nation, including being the lead of his own season, has written a memoir, comes out publicly on GMA and NOW he’s filming a Netflix reality show about life after coming out. No. Nope. That’s enough. Relax, dude. Stop being a TOTAL reality show whorebag. Find your way without a camera crew. This is unhealthy. Cut the shit.

Oh hey, speaking of people who hoe themselves out for reality tv, check out the return of the horrific Hills reboot because OF COURSE Kristin is back… (*drink every time they say they don’t want to hurt people along the way, oops I’m hammered*)

Remember Chet Hanks? Course you do. It’s Tom Hanks’ black sheep son who spent several years exclusively speaking in a Jamaican accent and making us all wonder how America’s treasure Tom and his lovely wife Rita created this. Well he’s back. He made a video a month or so ago declaring it White Boy Summer. And those that weren’t incredibly offended by this were intrigued to hear more. So Chet followed that up with Official Rules (No Sperrys, no plaid shirts & no calling girls smokeshows.) And then Official Merch that seemed borderline racist due to his choice in font so he addressed that as well, also adding in Black Queen Summer.

And for the grand finale… THIS MASTERPIECE:

I mean….Yes. This is just so preposterous. Chet has finally come to terms with how outrageous he is as a human being and created something that he seems to actually be in on the joke with. The song’s got a catchy beat, he’s out here slappin Black Queen cheeks and covering them with SPF 50 with his Good Charlotte font merch and I enjoyed every second of it. We all needed a good laugh and Chet Hanx the self-proclaimed Vanilla King delivered. The only thing that would’ve made this even better was an appearance from complete polar opposites Tom & Colin Hanks. A cutaway to dear ole dad after those shenanigans would’ve really hit the funny bone:

4. Dancing With The Devil.

This is old news but in case you haven’t noticed, I’ve been on a little celeb hiatus for about a month now so I’m gonna yap about whatever I want now that I’ve returned. (The celeb hiatus was due to the fact that I got published *TWICE* not talking about Hollyweird and also my laptop was like hey, next up on your life bingo card of shitty and expensive things that happen out of the blue is me dying so buhbye.) So here I am, typing away on my gently used Macbook that was the only cost I could swing in the moment and I’M GONNA TALK ABOUT DEMI NOW, mmk? So her doc that I was thirsty as hell for came out and gotta be honest the way she rolled this thing out was infuriating. I thought it would be one shot and then people started spilling secrets from it and I had to question if it was already out and I somehow got the date wrong…nope it wasn’t. Everyone who got an advanced peek literally couldn’t stop themselves from spoiling it. THEN she releases it in half hour parts like episodes. Except it’s a doc…and we already knew all the salacious goss from it weeks beforehand. SO naturally I was super mad about it. IN SUMMARY: Demi relapsed a couple of years ago first with drinking and weed and then QUICKLY hit up crack and heroin. Ya know, super casual jump to take. And what’s hilarious about that is that she thought she could recreationally use these drugs as if they aren’t THE MOST ADDICTIVE SUBSTANCES in the drug game. She was lying about it and hiding it from everyone so it was a big shocker when she overdosed, which PS she essentially died from this overdose (was also raped by her drug dealer) and woke up blind and with a shit-ton of long-term injuries. Coolcoolcool. The doc talks a lot about her traumas and how she’s had a real rough go of it, her best friend wears this STUPID purple Aladdin hat the ENTIRE time and it makes me want to set it on fire atop his fluffy head:

And now we have a new Demi album that dropped at the same time as this doc (same title, so super confusing) and here’s her first video where she reenacts the night she overdosed down to a T. Song is FIRE but the video is a little much. I’m sure it was a therapeutic thing for her but like suuuuper creepy to be watching you hooked up to a thing sucking the blood out of your neck, cleaning it of all the drugs and then pumping it back in. *vomsicles*

So anyway, not a 10/10 recommend on the documentary split up into 30 min episodes for no reason unless you’re as fascinated by how Demi Lovato is still alive as I am. Can’t deny that voice though. Girl’s a powerhouse.

If I’m going to make you watch Chet Hanx motorboatin’ butts to a subpar rap, I would be remiss if I didn’t also shine a light on the superstar that is John Mayer on Tiktok. He joined recently and basically took over the damn thing. We’ve always known J.May has quite the personality and hosting his own Instagram show for a hot minute just solidified that. Now he’s in the Tok game and what first started out as just him giving behind the scenes stories on his hits or teaching us how to play guitar like him, quickly morphed into him writing original ditties such as Ravioli Shoes that took off and just generally being the likable panty dropper that he is. So please, take a mo’ out of your day to enjoy John Mayer in his element.

They just come to me #music #songwriting

Meanwhile I’m just out here also doing the Lord’s work with my Tiktoks. When you’re hot on the Tok streetz like me and John Mayer, you’re white hot, amirite?!