1. The Royal Family is adorbs city. We’ve got some new pics from little nugget Charlotte’s christening and I’m not kidding when I say that these two kids are the cutest little smushes that side of the pond. Frame this, screenshot it, whatever…it’s the rarest of things to ever see me talk about a child, let alone admit that it’s cute. I stand by this statement though. 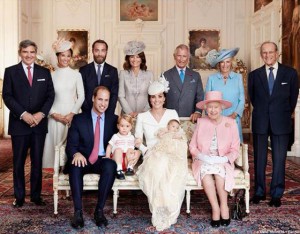 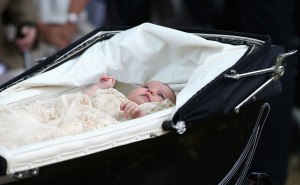 2. J.Law goes all Cher. Zany Jennifer Lawrence everybody’s goofy celeb favorite is back in the press for promoting the final(?) Hunger Games and she’s obviously acting like a real goober. Here’s her busting out into a little Cher with her HAWT BFFs/Costars on Conan.

3. Harry Styles fell onstage. I’m putting this in the mix because falling, much like farting, WILL ALWAYS BE FUNNY. Call me immature (I obviously am) but a good tumble will always put a smile on my face. So much so, in fact, that I had a SUUUUPER embarrassing fall up the steps coming from the train this past winter while wearing a skirt and tights and uggs (Uggs are the silent killer…seriously they should put a warning on those bad boys that they’re trip hazard city when you buy them) anyway back to my cringeworthy fall, I tripped over my Uggs on one step then tried to catch myself and tripped again and basically ended up crawling up the rest of the steps because my legs were like we’ve forgotten how to function please pick up the slack here. There were probably one trillion witnesses behind me but I pulled it together and never looked back. However, every time I think of that fall I laugh out loud. So long story short, I feel you, Harry. The fall that leads to an even bigger fall is the real deal. Now let me make fun of you.

4. Kristin “STE-VHENNNN” Cavallari is having a girl. Kristin and Jay Cutler are on their third kid and this piece of juice is really just for my ‘Guna shippers because did we EVER predict that the black choker wearin’, “my car is DUNZO” shoutin’, Cabo pole dancin’ sloot from Laguna would be the organic obsessed mommy that she is today? Like this is completely a shock, right? Anyway, she’s cranking out a girl this time which I’m guessing she’s probably pretty excited for after two boys but also she’s going to have 3 kids under the age of 4 and that sounds like a NIGHTMARE. Congrats, though girlfraaan. 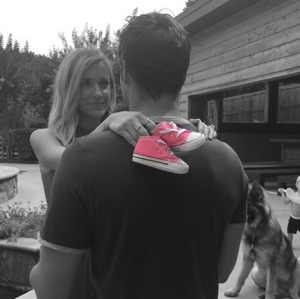 Julianne Hough has already been cast for Sandy and now they’ve announced our Danny will be Aaron Tveit and I’m honestly not quite so sure how I feel about it. John Travolta was a real hunk as Danny Zuko…like probably my first crush, which is super mortifying to admit now that he’s got scary face but he could get it when he was in that leather jacket. I’ll need some convincing with this guy and also I will probably never ever watch this program because musicals suck unless they include Zac Efron singing about whether he should choose basketball or acting. Life is so hard, especially when you have to break into song randomly.

BONUS: Because I love Amy Schumer a whole lot and can’t wait to see Trainwreck…Here’s John Hamm pretending to be Bill Hader and the two of them just acting like a couple of assholes in an interview.