We pick up this week with Kupah having his just-got-dumped-on-TV rage blackout aimed at a cameraman. Suddenly Kupah goes from screaming like a lunatic to smooth cool guy when Kaitlyn appears. He explains that he’s shouting because he doesn’t want to go home, he wants to get a book deal out of this…or something. Once he starts talking about more attractive girls he’s been with I think the producers gently say ok Kupah you’re 5 minutes is up please get into the Dodge Caravan and go quietly into the night to join Ryan B. McDrunkerson in Bachelorette shame.

Kaitlyn sobs about having to send men home. WAH MY LIFE IS SO HARD. Meanwhile, I sob about the fact that we have to put up with Tony for a minute longer than we should. WHAT DID I DO TO DESERVE THIS? Anyway, speaking of, apparently Kaitlyn did something to deserve a gaggle of bros who aren’t even trying to hide that they’re pursuing alternate careers via her TV show and peacing out left and right. It is ROUGH to watch. 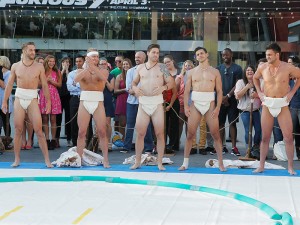 Sumo wrestlers sneak into the house and wake up all the men with a pretty aggress gong hit. JJ really wants to go on the Japanese date because he likes sushi. He’s obviously supes cultured. Once assembled, all the boys are wearing sumo diapers and need a whole lot of censorship, not unlike Jillian’s asshole last season. They do lunges in their thongs just so that Kaitlyn, a bunch of other dudes and a camera crew can size up the contestants’ junk hangin loosey goosey. (Joe’s in particular.) Tony runs his gentle hands through his mop top, pulls it into the babiest man bun I’ve ever seen, flicks his shades down and announces that a 600 lb man should be VERY AFRAID. T-Bone Tone slaps the fat man a bunch of times while everyone else points and laughs then MOOD SWING, Tony the healer must need a little more ginkgo because he is very sad. He tells Kaitlyn that every date is about aggression and he’s a lover even though he just played slap the man boob with that wrestler five minutes ago. Basically Tony acts like a whiny baby, which is ironic because he’s also wearing a diaper while he wah-wah’s. I stop listening as I usually do when Tony speaks, plus I was distracted by him tucking his hair behind his ears and hawking a loogey over the balcony while trying to win Kaitlyn over. Someone get Tony his bottle.

Exhibition: Tony decides not to participate because he’s too busy talking to whoever will listen about his sensitive soul. The guys de-robe and apparently there are parents out there who think it’s acceptable to bring their children to something like this. Needless to say a few kids caught an eyeful of man meat and will forever be scarred. Kaitlyn “fights” the big sumo guy AKA he tosses her around like an adorable little doll and then lets her push him out of the ring. Clint establishes himself as the Ben Z. of this week when he tries to break everyone’s bones. He wins the fight but not Kaitlyn’s heart when he decides to ignore her later. After some incoherent soul searching, Tony puts on his Navajo sweatshirt and camo hat and leaves to return to his life as a spiritual gangster who will milk his TV fame for all it’s worth…but not before he stops to talk to Kaitlyn and torture us all some more. BAIIII TONYYYYYY. Shawn saves Kaitlyn from awk city of Clint ignoring her, is his usual adorbsicles self and gets the rose.

One on One with Ben Z. –SURPRISE YOU’RE GONNA DIE by Chris Harrison

Chris Harrison is waiting for them in a dark creepy basement. Exploiting Kaitlyn’s fears, Chris is all hey I’m gonna lock you two in a room full of birds and you have to figure out how to get out. Ben reels Kaitlyn in with his strong arms and cradles her when pigeons make her screech (I do not suggest you ever move to a city, Kaitlyn.) The room is essentially a horror movie nightmare with someone in the bed moving around and they have to troll around looking for clues to get themselves out before they die via gas chamber. Ya know, just fun-loving family programming. Full disclosz: I had to cover my eyes a couple times. The password to their freedom is “roses”…did we really need to watch them touch snakes, cockroaches, maggots, limbs, puke, blood and unearth a picture of Britt’s face just to discover that the password is THE PREMISE OF THE SHOW? Later they order pizza and Ben Z. talks more about his dead mom and how he suppresses his man tears. Quick tip: if your parents ever tell you to walk the dog, don’t. Finally they hot tub and Ben Z catches a rose and I catch a glimpse of another contestant with a hideous shoulder tat.

The boys have to teach sex ed to children far too small to be learning about penetration. We soon learn that LoLzz, Kaitlyn has hired all of these child actors to be a bunch of pervs and ask questions that will give these guys the uncomfies like the little heffer who asked Ryan and his swoopy hair (seriously what is this hairstyle?) about the clitoris. 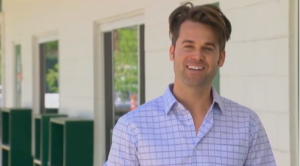 Ryan brilliantly advises that little chunks learn how to rub up on that shit if he ever wants to get a girl. Not only are these kids inquisitive about the best sex positions, they also are the biggest overreactors in the game. I’m guessing they would’ve gotten their paychecks for this job either way, so the dramats facial expressions were a bit much. Although when Joshua described a “tampin” as a torpedo and a girl’s period as her uterine layer dying, this seemed like an appropo reaction:

Ben H. steps up to save the day and tell a fairytale story about how sex happens with reenactments and oh my lanta Prince Charming does exist as he mimes a sperm swimming through the “stuff”. ABC shows what a bunch of prudes they are by bleeping everything out like it’s a Kanye performance or something.

Later Joshua reveals that not only did he learn about puberty from cows, he also didn’t have his first kiss until college. Kaitlyn’s like panties ON. Then Ben H. takes her to the roof, pulls a quick dip kiss, and Kaitlyn’s like panties OFF. Obviously Ben H. gets the rose. Also Jared, whose face and personality I would like to punch, kisses Kaitlyn like a baby bitch and it makes me squirm. Jared the weasel needs to go.

While all of this magic is happening with Kaitlyn and her group date, there’s a whole lot of bromance simmering back at the mansion between the two douchenozzles of the crew. Clint and JJ like to wrassle and eat together and since the Bachelorette has no qualms with being offensive they try to tease a gay storyline through editing and well-placed censorship. The bros hang out in the hot tub and talk about turtles then wind down with some guitar jams by the fire. And that’s just a regular day for these two apparently. How could we not believe it’s love?! Clint has decided that he doesn’t want to pork Kaitlyn, he’d much prefer to stick around and bro out with JJ because it would be OUTRAGEOUS to think that these two can exchange numbers and do that off camera.

Clint spews some bullshit about not having the balls to talk to Kaitlyn after the sumo date and then smashed his tongue down her throat like a con artist to guarantee a rose and a trip to JJ’s back door. FTR, if we were going to pick gays out of this group, I think these two morons would be bottom rung, but whatever. They both like sports and popping back zits. They did not factor in Joshua’s narc’ing skillz and we end this week with yet another confrontation cliffhanger between our gal Kaitlyn and a turd exploiting the show for Twitter followers. In the event that you wanted to end on a more satisfying note, here’s a picture of Shawn’s man bunz.

“Me and my daughter are cool.” -Cory defending to himself why he should get a rose and Kaitlyn should be a stepmommy. He’s hot but it’s probably for the best that he was sent packing to hang with his cool daughter.”

“Ben Z is a babe soda.” My new (much more appropriate way) to say a guy is hot. Thanks Kait.

“I see the world through the eyes of a child, the heart of a warrior and I have a gypsy soul.”-Tony repeating this phrase over and over and in about 3,2,1 we’ll see him selling t-shirts online with this serial killer motto.

“I think Tony partied his ass off last night because it’s non-existent.”-JJ spending his group date looking at the other guys’ buhholes. Wise use of your time, J.

“Villains gotta vill.”-The bros who shower together also have a catchphrase and it’s a little too reminiscent of a T.Swift song. I can only assume that it will soon be a matching shoulder tat displayed loud and proud.