This was apparently so that old people could understand this song, but like I needed it just as much as the next geezer. Pretty hilar that “Instagram” translates to posting pictures for strangers to like. I mean, that’s basically what it is, but saying it like that makes it sound a whole lot more like an AIM chatroom for sexual predators. Either way, let’s all promise to go HAM sammich this weekend.

So, a wealthy investor offered to fund a Happy Endings movie and David Caspe didn’t say yes? Well that’s just PREPOSTEROUS. If you’re not going to do a movie, at least hop on that Netflix Nostalgia and choo-choo your way to another season full of Alex burying her face in a full rack of ribs and Penny giving me 100 new annoying abbrevs to use ad nauseam.

It’s how many years later and Dawson’s still a big loser with a capital L. James Corden put Joey Potter on the hotspot this week and asked the real hard-hitting questions…who was a better kisser, Pacey or Dawson. After squirming around, Ryan Reynolds stepped right in and gave us the most obvious answer ever. OF COURSE Pacey was a better kisser… I mean he slept with his teacher when he was like 16. He had PLENTY of practice. Dawson practiced on a mannequin.

4. Don’t Sleep on the Stapletons.

Chris Stapleton has been the country singer to watch this year as he’s sweeping awards and duetting with JT like nobody’s biz. This duet with his wife was just officially released (they cover it at their shows) and I can’t say I’ve ever been a fan of the song “You Are My Sunshine” but this version is rad. Good for “rocking on your front porch while sipping a whiskey” jam.

Also it took a lot for me to say that considering my blind rage toward the lyric “You are my sunshine” ever since the wall decor section in Teej was ‘sploding with variations of it for FAR TOO LONG. Sorry, I just got mad again while reliving the pain. HOW MANY DIFFERENT WAYS CAN YOU HIGHLIGHT SUNSHINE IN YELLOW ON A CANVAS? Ugh. Now I need to listen to the Stapletons soothing voices again to calm me down. Full disclosure-it’s entirely possible that I’m on a TJX Companies black list for the amount of time I spent in the store rearranging their signs for this perfect picture. WORTH IT.

5.  The Rachel is making a comeback.

This is technically not from this week but it’s still worth watching. Vanessa’s Rachel impression might’ve made the Salty before, but this was full in costume and with a touch of Friends racism, so it’s better. Even Pheebs thinks so. Also it’s more entertaining than the fake-out Friends reunion that they’re still trying to trick everyone with.

The celebratory day has come where they’ve thrown Dawson’s Creek into syndication in hopes of a revival of new fans pleading for a reunion. Unfortunately since I do not have a TV in my cubicle, I can’t enjoy the return to the Creek, which has caused me to consider quitting my job just for a daily episode of Dawson’s. I’m sure my boss would understand. Anyway, as I was brainstorming different blogs I could write in commemoration of a show so good that I blew through the first three seasons while living in a different country (some choose to immerse themselves in the foreign culture, I chose to immerse myself in Capeside), the moments I kept recalling were those that gave me the cringes. The times when the characters-mostly Joey and Dawson, the two most insufferable TV leads in history-did something that made me want to cover my eyes and hide from the screen. I think these times are what sums up Dawson’s best as the pinnacle teen drama and so without further ado, all the cringes in the world.

Beginning rightfully so, with the worst theme song to ever exist…take it away yodeler crooning about hearts and arrows and sunsets:

Dawson asks his dad how to kiss

There are two REAL icky parts to this scene. First of all, Dawson legitimately asks his dad what the technique is for kissing which ensues in a show and tell of him macking a Joey mannequin head. His dad pointing to his lip and telling Dawson to keep it loose and relaxed made me almost upchuck. Second, Joey peeping Tom’s the whole thing from the upstairs balcony with her shirt wide open over a bikini top. WHAT?! I’m also almost positive that she needs a change of undies after watching Dawson tongue her replica head. See: last picture. 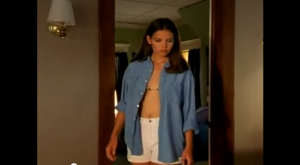 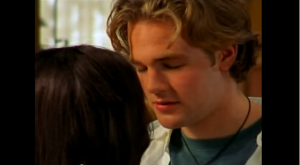 If you’re bold enough and aren’t worried about losing the contents of your stomach watch the scene here from 8:32-12:00:

Everyone talks obsessively about sex, but no one actually has it

Dawson’s little chatski with his dad about smooching begins because he’s wondering where his camera is and Dawson’s dad is like oh it’s in the bedroom where your mom and I just filmed a sex tape, please leave that behind when you take your camera back. Which leads me right to the casual sex conversations that occur every episode, yet there’s almost NO actual sex. Thank God for Jen because she brings a little spice to the show but obviously she’s labeled as a real NYC whorebag. Joey holds onto her V-card until season 4 with Pacey then pretty much never has sex again, Dawson spends his entire existence crying about being the virg but turns down sex from several ladies just so he can whine more. Remembs slutty Eve?! Anyway, don’t expect any ‘tration in the Creek unless it has been dissected verbally for years beforehand. 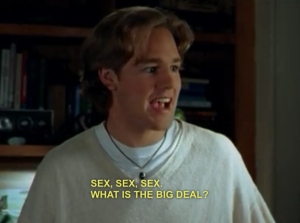 Jack still thinks he’s a straight and pursues naïve little Joey who is trying to be really artistic. Jack poses nude for her because they’re SO adult (16?) and uh oh, they start chit chatting about sex and he pops a boner mid-sesh. I wonder if Joey sketched that in to be true to her art? Nope, it turns out she went for the carefully positioned leg to cover up that sitch. Anyway, moral of the story is that Jack compares sex to Starry Night, and also he’s afraid of it.

Andie and Dawson sing the blues

Dawson is all wah wah over Joey (what’s new?) and Andie has a shitty home life so they decide to get buzzed and hit the stage at a blues club to embarrass themselves and me, as well. Dawson singing about Jack being gay, Andie using a tacky “blues” (can we call it that?) accent and reminding us her name is Andie. AGH. Someone box my ears.

Joey Potter SUCKS at singing, and yet we are forced to watch her take the stage SEVERAL times throughout the series. I’m really not sure why they kept trying to make Joey the songstress happen but my ears forever wished it would stop. First we had a little talent contest where she takes on a braodway song with her baby bird whiny voice, then there’s karaoke and finally in her college years, Joey is like why not join a rock band, amirite? Her singing is better this time around…was she drunk? Was I drunk? There’s no way to really tell but better still sucks and finally by the last season she had retired the mic—but the damage had already been done. Memories of her shrill voice and gyrations will cloud my brain until the day I die.

Dawson drops out of film class and redecorates his room.

Butthurt over someone else being good at making movies, Dawson drops the class to “step away and recharge his batteries” like this is has been his career for 20 years and not just a HIGH SCHOOL CLASS. In the wake of reinventing himself as someone whose not a loser, he decides to clear his walls of movie posters and hang John Lennon’s “Imagine” poster, making him an even bigger loser. Not dramats at all, Dawson. 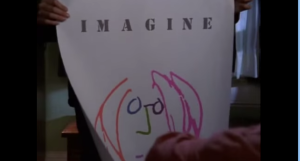 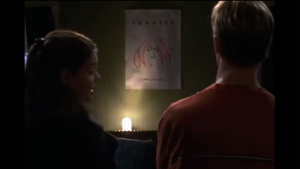 Good ole Josephine Potter is dating AJ the college boy, thus allowing her to act like she’s eons above high school morons except SHE CAN’T EVEN DRIVE YET. Since her boy chose studying over a Valentine’s date, she’s forced to tag along with Dawson and Pacey to a field party. Joey obviously shits all over drinking and says it’s for the scum of the earth then ends up attending the party WEARING A BUCKET HAT…in the middle of winter…in Massachusetts. What a party animal.

Watch beginning to 2:07 for full effect of dialogue suited for PhD students and not 16 year olds.

I mean…for obvious reasons this is the top cringeworthy moment for this show and probably all of television for how much gif play it gets on the internet to this day. The most hideous of cry faces and it’s all over a girl not choosing him. Pls drown yourself in your tears, Dawson.

Pacey and Joey do story time on True Love 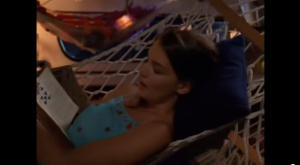 Coming back from a summer sharing a boat called “True Love” to the rumors of did they or didn’t they bone is a pretty typical thing for a high school couple. Since we all know Joey is a real square and Pacey lost his V to a teacher like a BAMF, there was cause for believing nothing actually happened. As they whine about it the whole episode, finally we get our redemption when Joey says, “Hey Pace, can we do that thing we do sometimes?” Obviously we all rub our hands together in anticipation for a little rocking of the boat. NOPE. We find out that they’ve spent the past few months popcorn reading in bunked hammocks while holding hands. Boner. Kill. 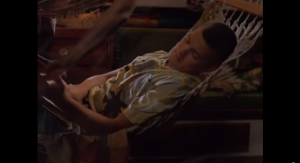 I understand that every dramatic show needs to kill off a supporting character once in a while to shake things up so I’m not mad they killed off Mitch because Dawson needed to man up and have a real tragedy occur in his life to show him that getting rejected from NYU wasn’t the end of the world…but COME ON…happy-go-lucky Mitch doing a car solo to “Drift Away” while enjoying an ice cold snack and then reaching down for a little floor ice cream only to swerve to his death…IS ANYONE SUPPOSED TO TAKE THAT SERIOUSLY? Mitch deserved more than death by frozen treat. 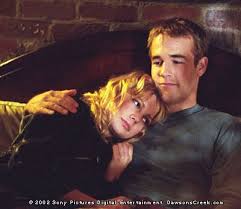 Yikes, Jen. Not a good look. No girl ever wants to be the one to snatch up a guy’s V card and you willingly do it for the WHINEST, CLINGIEST guy who has always been in love with your friend? Woof. Generally Jen is a real badass in the series and therefore deserves much more fist bumps than she does cringes, but this is one I couldn’t give her the knucks for. Related but also kind of unrelated: the winter PJ’s set. SEXY. 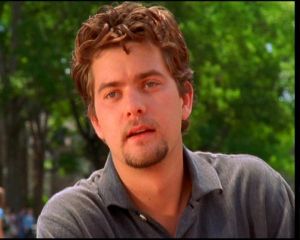 Ick. This thing was atrocious and I commend the fact that most of the characters agreed with me. Pacey’s goatee got a lot of chirping, as it should have, and finally Joey got to shave it off him in the least sexy scene of all time that somehow led to their romantic reunion. Shaving is an aphrodisiac apparently. 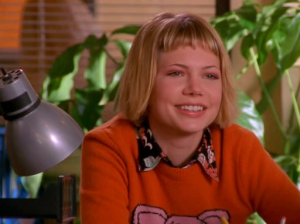 Ok, I promised I wouldn’t harp on Jen that much because she was pretty cool but like I will not go quietly into the night about season 6’s bangs atrocity. These weren’t just bangs, these were I accidentally got drunk and was near scissors, bangs. What makes it worse is that things finally start to go swell for Jen’s love life with CJ the total dreamboat and yet her forehead mustache stays intact. WHY.

Relive all these cringes and more on ABC Family at Noon, M-F. Play us out, Paula!