I went into this one with real low expectations and assumed I would be turning it off halfway through. Mostly because even though John Travolta is a big creep-dogg now, his role as Danny Zuko was easily my first crush (I’ve got a thing for bad boys) and I had a hard time imagining anyone else taking his place as the Zukster. I would call last night the first successful TV musical and I think everyone in America agrees. Mostly because of Aaron Tveit’s hips. Really though, in the sand, under the docks, I’d smooch this boy anywhere after last night’s performance. Here are the highs and lows of a musical based on the premise of a girl changing everything about herself for sex.

-Seriously Sandy, stop being such a square. Kisses from a guy with an open button-down make everything better.

-My favorite college bar used to play Summer Nights every single Saturday, which is just good business. Get a bunch of college kids boozed up and then have them scream in unison “NIIIII-HEIIIGHHHTTTSSSSS”. Needless to say, after damaging my eardrums from that on repeat every weekend, I was a little nervous for the live rendition. They nailed it though. Speaking of nailed, I feel like Danny’s friends should try it sometime and maybe they wouldn’t be so hard up for his beach hookup deets.

-LET THE HIP THRUSTS BEGIN. He could have sung Lamb Chop Sing-along here and I wouldn’t have noticed at all thanks to those hot moves. Seriously, were they even singing about a car?

-All hail the 50’s for their athletic nut huggers

-I don’t remember Frenchie being such a feminist in the original Grease, then again I also don’t remember a country that wasn’t aggressively racist and segregated in the 1950’s but that’s neither here nor there. In modern-reboot world, black students don’t have to drink from a separate drinking fountain, they can hand jive with the rest of ‘em, and Frenchie is a capital F feminist. She yaps to Sandy about how she doesn’t need Danny, she can be an independent woman like they teach in home ec. And Sandy’s like yeah whatever I’m gonna go buy some leather pants and get my man.

-Vanessa Hudgens as Rizzo slayed. Hudgens lost her dad this past weekend and went on to crush it as everyone’s fave sloot. She was sassy and looked like a real dime. Even her solo at the end was good and if we’re being honest that was always a song I skipped so I could get right to “tell me about it, stud” goods. 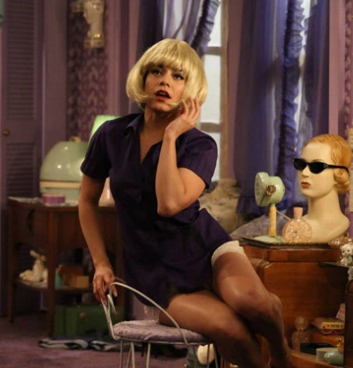 -Was it lame that they had to edit song lyrics and keep the kisses PG for primetime? Kind of. Was it AWESOME that they didn’t tone down the dancing? Yes. I’d like to personally thank Fox for allowing this to air:

It looked like a Miami club all up in that gym. Except of course, for Sandy…

-I wore leather pants out Saturday night and totally had a hot guy crawl around the bar after me too, and pass out from how hot I looked… (Not..jealous..at..all)

-Although it pains me to say this, because Boyz II Men are the originators of babymakin music, but after their performance as the teen angels, I think they’re past their prime. In other words, they’ve come to the end of the road. ZING.

-Related but also unrelated to Boyz II Men, Carly Rae Jepsen kinda sucked as Frenchie. The original Frenchie was so much better. She even outshined Carly as the waitress at the diner. Yikes.

-This new song was alright, but nothing’s weirder than the guitar guy roaming around the gym trying to distract us from our very own “who wears short shorts” commercial in the flesh, via Danny Zuko.

-The infamous drag race where there’s fire and cars getting chopped up and a terrifying villain named Leo with pockmarks all over his face was DUST in last night’s version. I understand they have limited resources on a sound stage but they didn’t even try that hard to make it look like they weren’t in a stationary car making a bunch of intense faces. I stand by my tweet.

The drag racing scene really killed it. MY HEART WAS RACING as they drove in place. #GreaseLive pic.twitter.com/ORl7VQjoOS

-If they had a carnival set up outside WHY DID THEY NOT HAVE THE ENTIRE FINAL SCENE THERE? Starting in the gym and then driving golf carts around the set to finish the show was super dumb.

-Yeah, yeah, smoking is the worst but Bad Sandy NEEDS a cigg here. How is she supposed to stomp it out with her heel and look like a leather-clad minx while doing it?

-Related: you can’t have the final scene without the scandalous Shake Shack shimmy and the flying car. No argument. End of discussion.

Oh, obviously Julianne Hough was great as Sandy. As if that was ever a question. The girl’s a profesh at everything and cute as a button. From one Bad Sandy to another, I’ll just continue to be bitter about the fact that she got to mack Aaron and stuff…