1. The Bieber Roast was surprisingly entertaining. Look, we all hate Justin Bieber and know that this was an aggress PR move so that he can try to salvage his career after being a real d-bag for 3 years now. I went into the roast expecting it to be Biebz being obnoxious and a bunch of comedians who were paid to be there and didn’t want to be. It turned out to be pretty good, mostly because the comedians/mish mash of characters that showed up didn’t even spend that much time roasting Bieber and giving him the attention he so clearly needs, they roasted each other waaayyyy better. Overall winners are definitely Natasha Leggero who crushed it and Hanibal Burress–this is also obviously biased because they’re the two that very clearly showed they hated Bieber. I always respect the hell out of comedians who are told they have to say something nice at the end of their roast and literally struggle to fake it. I’m pretty sure Natasha just told Biebs that things will probably get better. Hannibal said Biebs seemed like a sharp business man. If you didn’t catch it Monday night, I recommend it for some laughs, I also recommend that you skip the last 10 minutes when Bieber takes the time to thank God and beg for forgiveness. Yuck. Get outta here. Bonus Points: Shaq literally picking Kevin Hart up and spanking him like a small child. Easily the most ridiculous thing I’ve ever seen and yet the internet couldn’t make it into a gif. Pretty selfish.

2. Week three of Zayn spitting in the face of 1D fans. His new solo song was released and now the heat IS ON.

3. Hova banded all of the billionaire musicians together to create Tidal, a music listening service where rich singers get more money for you to listen to their music. This week they made a big deal on social media, changing their avatars to a blue square and talking about equality for all artists and then they held a huge press conference with all of the superstars to say, please start emptying your pockets for our music, commoners. No disrespect (cause Illuminati) but there is NO way I would start paying a monthly fee to listen to music. I think paying over $100 for a concert ticket in the nose bleeds is criminal enough as it is. But what do I know, I’m obviously not the genius who put a helmet on, added plates for mouse ears and started cashing in on beatz. 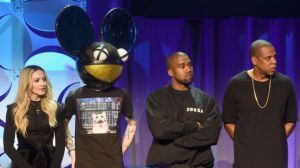 4. LUDA is back in my life. He’s doing press for Furious 7 and his new album LUDAversal and damnit I missed him. Remember the disgusting song Fantasy that was about lickin? I do, because Cin and I just jammed to it road trip style with rapper hands. Good news is that he did an acoustic version with the Roots this week. BACK SEAT, WINDOWS UP.

Have a good Easter weekend thinking of those baby blues.