I just felt like maybe everyone needed to get a little crazy. You’re welcome. The good news is that my blog can’t be any worse than that. Did I do that on purpose? Obviously. Trick of the trade.

I wonder if Rosebud’s little nub legs stopped functioning properly because she was tortured with Erika Jayne’s music as a little donkey hybrid at the farm of misfit toys in Ohio. Who cares though, because Lisa has friends with cowboy hats to hand deliver TWO horses that aren’t retarded. These ones are from Texas…so suck it, Ohio. All memories of Rosebud are swept under the rug as Lisa bathes herself in tiny horse love. The love, it seems, is not very mutual as both horses refuse to enter her home and buck against their pink frilly leashes. As this all goes down, Lisa struts in front of them in awe of how calm they both are. It seems she’s still the most observant creature in all the land. 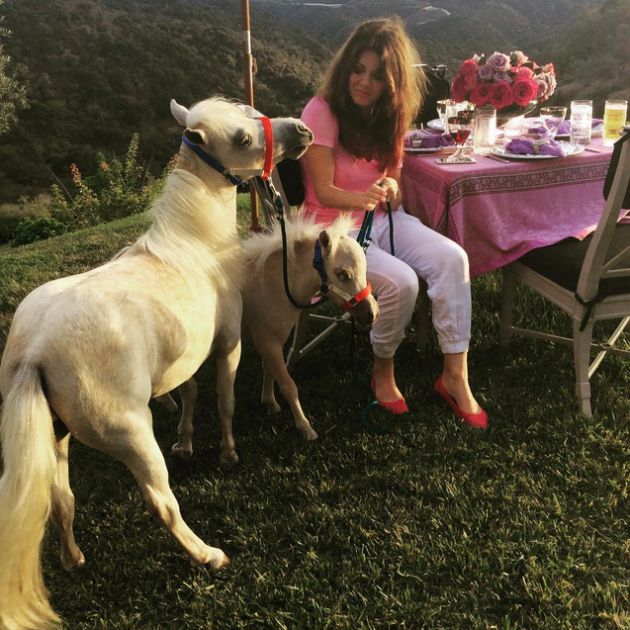 I guess Ken’s birthday that we’ve now celebrated for 3 weeks in a row has ACTUALLY arrived, so the little toy breeds have been purchased JUST IN TIME. What’s more shocking than Lisa buying Ken a present for herself is probably the fact that Ken isn’t in a wheelchair with a neck brace. I thought for sure he would have at least sustained severe injuries from getting spiked into the pool at his own birthday party. KEN IS INVINCIBLE. He hates his birthday gift though because he’s the one who’ll have to pick up all the horse shit. HA-HA KEN. 70 years old but you still haven’t lost that colorful sense of humor. You haven’t fooled me for one second that you don’t have a specific human to pick up poop on staff at your Villa Rosa zoo of animals. I mean you have swans for Pete’s sake. THOSE THINGS SHIT ERREWHERE. Stop being so dramats and cuddle your freak horses before they probably die unexpectedly from complications of breeding tiny animals that are meant to weight 1000 lbs.

While we’re on the topic of sad things, let’s touch upon the fact that Erika can’t kick it with her husband during the day cause he has to WORK. Ugh, what a struggle. She does call him every five minutes to tell him what she’s eating though. JK she works really hard shimmying her gigantic ass into mesh bodysuit after mesh bodysuit. Then once said sequin nylon has been rippled over her T&A, she drops it down in front of a mirror. Satisfied with a day of hard work she goes home and calls Mr. Girardi to ask him what he’s thinking and what he’s doing and when was the last time he went to the bathroom.

In boringland, Eileen and Vince meet for lunch because sometimes they go days without seeing each other. In Eileen’s words, sometimes they’re both working, and sometimes one is working and the other isn’t, and sometimes they’re both home. Whoa. Anyway, Vince WAS working…on his gambling at the track and won big. For a rich person to say that I was expecting it to be thousands and then he really let me down by saying it was like 600 bucks. That seems like chump change. Not to me personally…I won $12.50 at the track once and you would’ve thought I was Diddy at the bar that night the way I was flashing my winnings. I also don’t work in Hollywood soo….a little different. Also Vince made me laugh out loud when he tells Eileen she’s not allowed to yap at him until afternoon because she’s a caffeine monster. I support this wholeheartedly. If I had to interact with Eileen after java I would also tell her she had to play the quiet game until she’s tired herself out. Rules are rules.

Rinna lunches with her kids and continues to spend an exorbitant amount of time convincing viewers that her teens aren’t spoiled, meanwhile Kyle continues to show us that hers are obnoxxxxxxxious. They hit up the Piercing Pagoda—if that’s what you call a private jeweler who also apparently does piercings on the side. Sophia, as you recall is terrified of needles and made a G-D SCENE last time she got her ears pierced. She’s a real baby bitch about it and yet keeps getting her F’ing ears pierced on TV. This time around she wears shades inside. It didn’t distract from her high pitch screeching and tears. Her mom had to sit in her lap. Isn’t this girl in college?! Pull it together. Prayers to this lady at a high-end jewelry store putting up with these morons. Portia was up next and it was hysterics 2.0. She couldn’t even go through with it so she left with the ole one hoop look. Supes trendy. 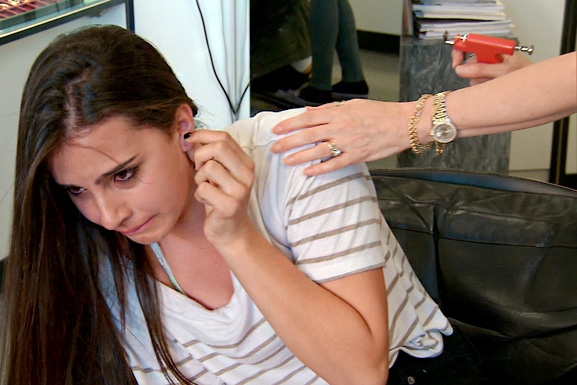 In a couples hang at Yo’s Malibu house (instead of germ-tastic condo), Erika wants David’s opinion on her music. He’s like errrr I only work with good musicians…sooo. Then Yolanda has a brilliant idea and suggests Erika Jayne join David onstage in a performance for the Pope and Andrea Bocelli. Do we think the Pope knows what “pat the puss” is? Cause he gonn’ LEARN. 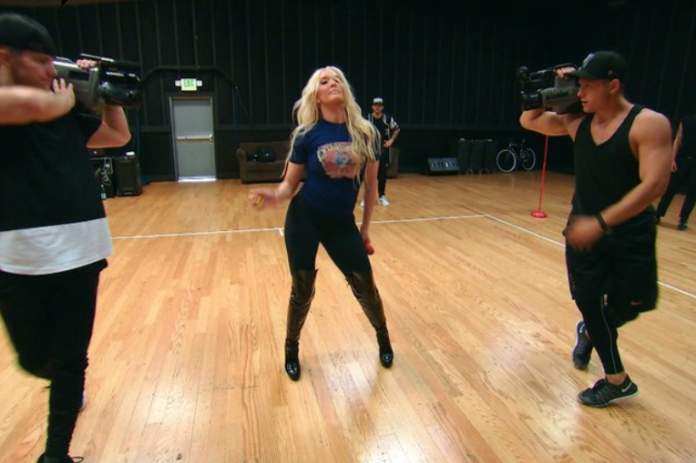 Even though Kim is no longer mumbling incoherent things on this show…doesn’t mean we can’t show clips of her mumbling incoherent things in made for TV movies. Lisa invites the ladies over to stare at her ponies but first they must gossip. Kim apparently threw some social media shade at Lisa and her penance is to be brutally made fun of by Bravo. I think we can all agree this was a win. After cutting to a clip of Kim at last year’s reunion saying she wouldn’t just do anything for a buck, they smoothly transition into her getting squashed by a shark in Sharknado 3. I truly appreciated the thinly veiled attempt to laugh at Kim’s expense. Andy Cohen giveth and taketh away as he pleases.

Rinna gives me the ickies this week, which is rare, when she brings up Taylor’s dumb point again about Yolanda’s Instagram. Apparently Yo throwing a filter on some Canadian vacay pics means that she has Munchausen’s Disease. According to the Wikipedia page, which Rinna does a dramatic reading of, it means Yo is faking. Maybe if Rinna saw Yolanda’s health advocate divvying up baggies of pills like she was throwing Gogurt’s and Dunkaroos into a brown paper bag for lunch each day of Yo’s vacation, she wouldn’t be such a twat. Rinna then takes this time to make everything about herself and tear up for even taking part in a conversation that questions this. Rinna just bumped herself to the Yolanda shit list with that one. It looks like Eileen and Erika are the only Pro-Yo’s left. To lay on the disrespect, I have to then watch Kyle and Eileen chase two tiny horses around in stilettos and try to mount them. AH, MY EYES.