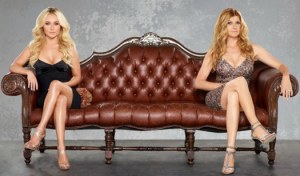 Three weeks have passed in Nashville since the wedding that wasn’t, the death that wasn’t, and the dad that wasn’t. The writers took a break this week from the exhausting and repetitive story lines of Will and Layla and I’ve never been more grateful. Also noticeably missing? Luke the scorned lover, because apparently he’s crushing it post-Rayna…and it all started with that fire flames song at his wedding concert.

While Luke is undoubtedly playing show after show and hate-banging groupies, Deacon is dealing with his liver cancer, which has consumed his life. He reveals the bad news to his AA group and promptly tells them that he doesn’t want any of their booze soaked organs so keep those on lock down. Deacon’s liver may be aggressively depleting, but the man’s sense of humor is still all there. The big drama starts when Mommy Dearest Beverly returns to Nashville to make Scarlett cower under a piano again. Just kidding, Scarlett tricked her into coming back and making amends when really she just wants to get her hands on a new liver for Deacon. Deacon finds out that Scarlett sneaky invited his sister and he has a seizure. Calm down, Deacon, no reason to get all bent out of shape, gawd. It’s a real rollercoaster of emotions when Bev says “NO LIVER FOR YOU, DEACON!” and then decides to take the test after Scarlett begs her to be a decent human being. And now’s the point in time when I must interrupt this melodrama to announce that SMOKESHOW DOC IS BACK. Yaassss. Fresh eye candy. He talks about what the surgery entails and how long the recovery period is as I drool at my TV.

Anyway, back to the ADORABLY BARFWORTHY happy family reunion scene when Bev, Deacon and Scarlett harmonize around the kitchen sink. Everyone is smiling and crooning when there is an abrupt ending to the campfire singing. Coming from left field, Bev isn’t a blood type match. WOW. You mean to tell me Deacon put ALL of his HOPE on ONE person and she’s NOT a match? Could she be lying about her results though? Is that something that Bev would do, cause she seemed so pure of heart…Oh wait she was lying and was about to sneak outta town right quick too. Bevdawgz gets caught in the act and pulls the “you did this to yourself” classic line with Deacon. She leaves and confirms she’s still an awful person. Little downward spiral when Scarlett sobs about Deacon probz dying in the dark and Deacon admits he’s terrified. C’mon guys, TV shows don’t kill off main characters unless they’re looking to commit show suicide (I’m looking at you The OC). There is NO NEED to be worried at all. (As I google spoiler alerts to confirm that Deacon lives…)

We should be worried about Rayna’s career though because girl has been hibernating from the press and it’s gotten to the point where she was offered a residency in Vegas. I am appalled. This is Rayna JAMES. She ain’t no Mariah Carey! She’ll retire to Vegas, NEVER. She decides instead to have an impromptu show at the Bluebird. Except oopsie, while rehearsing she sees a picture of her and Deacon on the wall and spirals into Deana (Raycon? Dayna? We’ll work on that..) flashbacks to a couple months ago, which is probably for the best because any time they’ve flashed back any farther Rayna’s hair has been all sorts of ugly. In these flashbacks she has perfect waves and a side braid that’s on point, oh and also Deacon almost kills her in that drunk driving incident. Blip on the radar, really. Suddenly she can’t perform because she remembered that.

Luckily for Rayna, while she’s going through all this emotional trauma she can really rely on her daughter to be a rock and pull her through. I couldn’t even type that with a straight face. Maddie amps up her insufferable teen vibes this week and it’s SUFFOCATING. It seems as though Jeff Fordham’s “after school music program” is actually just his way of covering up child labor laws because he has Maddie & Daphne in a recording studio laying down tracks. Teddy walks in and is like yes, my two daughters in a studio with a label exec looks very typical for an educational group, there is certainly nothing suspicious about this. Obviously it turns sketchy real fast when Jeff proposes a record deal for Maddie, kicking little Daphne to the CURB. That’s cold, Jeff. Teddy’s rational for a second and says no to a record deal for his fifteen year old daughter. It certainly doesn’t help Maddie’s case that she immediately shouts about how she’s so old and mature and would like to move out of the house, start smoking and bang randoms.Or she just wants to become a country star, same difference, really. Maddie continues her Tour de Torment when she bugs the shit out of her mom trying to get the juicy deets about Deacon. Rayna and Maddie sob togets about how Deacon’s not talking to them.. which makes them look like a couple of real selfish assholes. Maybe take your private car that’s probably always on call over to Deacon’s house and check things out? Just a suggestion.

Equally as selfish but even more annoying is Micah, the overdramatic kid who has taken to ignoring Gunnar’s phone calls and pretending he’s not home. Too bad his grams narc’ed on him, leading Gunnar to drop in for a surprise visit. Wittle baby Micah has a wittle baby meltdown because his dad was a bad guy AND SO IS HE. Micah shouts this as he runs away as fast as those little chicken legs will take him.To reward Micah for being such a well-behaved and idyllic child, Gunnar gifts Micah with a brand new iPhone. Uncle Gunz also pulls the classic giving of the gift and THEN asking if the grandparents are ok with it after the kid already has his dirty paws all over it– putting them in the position where they can’t say no unless they want Micah to cry and run away again. Moral of the story, I expect many future Facetimes between Gunnar and the little shit with the top of the line cell phone. (Side note: Mom and Dad-I still have the 4S so if you’d like to surprise me with the newest model for throwing a tantrum I wouldn’t hate it.)

In lame story line land, Glen visits Juliette bearing candy and news that no one wants to pay her to sing or act but is she maybe interested in doing the noon show at Seaworld? She spends the rest of the episode reminding us once again that she’s having a baby as if we can’t SEE that buildings tremble when she walks by. Also apparently she has many months to go before baby…does this mean she’ll get bigger?! Have I mentioned that I never want to be pregnant?

Finally, we get the Bluebird concert we’ve all been waiting for. Rayna has gotten over her case of the flashbacks and invites Maddie and Daphne onstage to sing. She tells us so poetically that it brings a tear to my eye, “This song is called real life, cause that’s what we’re livin.” You mean to say that you’re not living fake life? Mind. Blown. It’s a sad song of course, because real life often is sad when the man you’ve loved your whole life but also avoided has liver cancer that you don’t know about. It’s the Bluebird comeback that we’ve been waiting for but I’m not so sure it’s the Bluebird concert that we deserve.

What we don’t deserve is the disbanding of the Maddie & Daphne dream team of harmonies. Teddy gets that and so he tells Jeff Fordham to kick rocks with that record deal. Fordham strong arms him like he’s some sort of southern Mafioso and not the sleazy record exec that porks girls half his age and gives them pills as a parting gift. And wouldn’t you know that the fast and loose lifestyle of Bachelor Teddy comes back to haunt present day Teddy. Don Fordham is swift to pull the “using the taxpayers money for sex” card aaaand Teddy’s pretty much screwed. Literally and figuratively. Hope Rayna understands that the price of their daughter is a few penetration sessions with a whore! Where do I sign?

A Few of My Favorite Things:

-“Touch my caramels and I’mma cut a bitch.” Is this something women are only allowed to say while pregs? Cause I’m pretty sure I’ve uttered that about my chocolate before…

-There are about 4 gratuitous Taylor Swift shoutouts in this episode and I eat that shit right up. I don’t love Maddie comparing herself to Tay though. Nice try, little girl.

-“Rayna is a fading ball of gas to the comet that Maddie could become.” Epic sci-fi burn by the Fordster.

-Jeff Fordham losing his SHIT on his assistant this episode was kind of hot right? Like hurling shit and calling her an idiot all because he needs to find a new young pop star to bone? No, just me? Whatever.

-While Maddie is wah-wahing about how Deacon is ignoring her, Daphne zings her with “Maybe he has a life.” YEAH, take a hint for once, Maddie.