*DISCLAIMER: I’d like to apologize for spelling Kaitlyn’s name wrong for my last recap and possibly the one before that. I’m far to concerned with remembering the extraneous E in Julia to focus on Kaitlyn but I lost some sleep over it so it’s RIGHT now.

The episode begins with Jimmy Kimmel being Chris’s wakeup call and although the room is dark we have a single spotlight shining on his six pack as he arises from bed and his sheets artfully cover his morning wood because he was obviously awoken from a dream about rubbing KardASHLEY’s magic lamp.

Jimmy surprises the girls who he refers to as the sister wives, and it becomes clear that I will have a partner in poking fun of these dum dums because Jimmy is taking over this episode and no one is safe from his sarcasm. He also introduces the “Amazing” jar for whoever slips and says it. (Read: Everyone.) 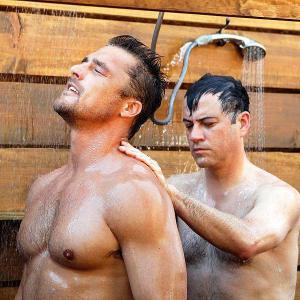 Kaitlyn wins the first date with Chris and is promised hor d’oeuvres, high ceilings and an amazing view. They’re taken to Costco and Chris is dressed for a salsa dancing class in a purple button down with the top 4 buttons undone so this is a nice twist. Kaitlyn is dressed like Khloe Kardashian with a flannel tied around her waist (did she clear this outfit by KardASHLEY?) They’re shocked that their date is to go grocery shopping like REGULAR couples do. Ugh. So they roll down the aisles of Costco in an inflatable hamster wheel that I’ve decided I NEED. I also will need some children to push me around in it like Chris and Kaitlyn had, child labor on TV style. They make out in the hamster ball, obv. Kids—shield your eyes. Then these two little hamsters get some food and folding tables fit for a trailer park BBQ to make Jimmy dinner. Once they return to Chris’s house they get cooking. By cooking, I mean Chris does all the work and Kaitlyn pours the whiskey. Live look into the teamwork that this relationship is/will be. While swigging their bourbon and cuddling, the two discover that Chris has a little bitch laugh and Kaitlyn has a man’s laugh. In related news, I’ve decided that I hate Chris’s laugh and I hear it WAY too much because he laughs when he’s uncomfortable, usually after he’s made out with someone. And I think we ALL know how often he’s been in that position. Speaking of, Jimmy shows up while Chris and Kaitlyn are feasting on each other’s faces. During dinner, Jimmy asks the hard hitting questions that we’ve all been wondering, like how will you feel when you find out that Chris has taken several ladies to Penetration Land aka the Fantasy Suite. Kaitlyn earns a rose by saying that she won’t mind because you have to test drive the car before you buy it. Kaitlyn is diving HARD for the I’m a bro and love casual sex award, we’ll see if this pays off in the end.

The theme of our first group date of the night is working on a farm, Napoleon Dynamite, Jimmy Kimmel style. Jillian, the walking black box censor, kicks off the competition with a serious case of ‘roid rage on some undeserving ears of corn. Since her ass is perpetually on display, the goat Jillian tries to milk next is too afraid of how hairy it is and won’t produce any milk for her. Carly the cruise ship singer on the other hand, gets her some goats milk STAT and tells us that she’s lactose intolerant right before she chugs it. YEEHAWWW get this girl a diaper QUICK. Jillian finally wrangles her goat and is hot on Carly’s tail so she decides to jump the pig fence to get ahead and of course they show this jump in slow motion and it’s just as glorious as when Benny “The Jet” Rodriguez laced up his new PF Flyers and jumped the Beast’s fence, except with a lot more ass crack. Our girl Carly wrangles a pig first and gets the W and I’m hoping she gets to a bathroom before that warm milk sloshing in her stomach turns into a real shit storm. Before she can, however, Jimmy has Chris pose with her for an American Gothic portrait and Jimmy also has to explain to all the ladies what this famous painting actually is and I’m assuming flash cards are involved. 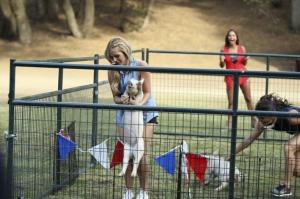 After the competition, Chris slobbers on a bunch of girls to the ominous and creepy soundtrack of Anastasia or something. Mackenzie, the brightest dental assistant in the group of unemployed and aspiring makeup design technicians, comes right out and asks Chris why he’s kissing everyone else and not just her? Although it’s a valid question to ask why Chris insists on shaking hands with his mouth before he even chats with a girl, Mackenzie, the one who tallies their kisses in a diary, wasn’t exactly the right person to call him out for it. Chris clears his throat a lot in response and doesn’t have a good reason, when really he could’ve just told Mackenzie to go shave her back now and I would’ve been satisfied (or not given her a rose). Becca stands out in the group of hungry Barbies and gives Chris some cheek (not the kind that Jillian is giving) because she doesn’t want to catch the herps that everyone’s swapping around. And he’s like no it’s cool I have to work for it, which obviously means giving her a rose so that he can get to know her tonsils.

Whitney calls her one on one date with Chris a “formal date”, yet she shows up in a jean vest over a hot pink 8th grade shelf bra cami from Limited Too with white jeans and a necklace made of pooka shells. Chris has decided to color coordinate and they look like a couple of cotton candies heading to dinner at The Max. Chris tells Whitney he likes people who can make friends and go with the flow, therefore Whitney the try-hard screeches LET’S CRASH THIS WEDDING. Whit breaks the cardinal rule of wedding crashing; don’t wear what the bride is wearing. Oh the bride isn’t also wearing white jeans? Never mind. She changes into a formal gown, thank GOD but their evening wear can’t save them because they do no prep work to coordinate their stories and it’s almost as if the producers are going to go over to the wedding party and ask if they can film it and also have them all sign releases. Regardless, Chris has his panties in a wad that they’ll get arrested. If I could arrest him for how bad he is at making small talk at weddings I would’ve had him thrown in jail to think about what he’s done and replay his awful dad dance moves. Chris really dropped the ball on socializing and Whitney steps into the role of future Mrs. Soules and obviously doesn’t take it too seriously. She gets a rose for being able to hold a conversation with strangers who know you’re crashing their wedding. PS-If you bring a gift, you are officially the LAMEST uninvited wedding guests in America. “Officer, arrest these two for asking to come to my wedding, bringing a camera crew and a set of crystal stemware, THEY ARE DEVIANTS. “

*To be clear–Whitney still has the voice of 1000 Mickey’s being shoved down a garbage disposal so this date felt like it lasted for centuries.*

There was no social before the rose ceremony last night, instead there was a pool party, giving the girls an opportunity to put on a full face of makeup, bikini and stilettos and wet their heads with beach waves hair spray to create the illusion that they actually went swimming.

JuElia sees that Chris is having fun horsing around in the pool so it’s obviously the perfect time for her to take him aside and tell him about her husband who horrifically committed suicide. Side (but important) note: Chris is wearing a leather-braided necklace during this extremely uncomfortable and detailed conversation. They follow up a heavy and terribly depressing topic that should never have been exploited for TV with a super relevant ad from The Bachelor: THINK YOU HAVE WHAT IT TAKES TO BE FAMOUS?! If that doesn’t end in a lawsuit I don’t know what will.

Jade gets a tour of Chris’s house including the bedroom, where they have a steamy make out session on his bed set to 70’s porn music. I’d like to shake hands with the music supervisor for this show. Meanwhile, Jillian lurks in the hot tub waiting to pounce for the sloppy seconds fifteenths. They have a minute together (full of swapping spit) and then the terrible three comprised of KardASHLEY, Mackenzie and Megan (who should think about putting that helmet back on) come and ruin it. KardASHLEY is upset that she did her “Kardashian look” and isn’t getting any attention or rubs to her belly ring region, so she runs off and cries about it. KardASHLEY has become the cheap plastic stemware rolling down the driveway of the entire pool party. She snags Chris finally to laugh/cry to him that she misses him and we all know the formula by now, tears=make outs. When Chris asks KardASHLEY if she’s crying or laughing and she replies both, it hits a little too close to home because I also spend two hours every Monday simultaneously crying and laughing that my life has come to watching girls fight over hot tub minutes.

“It’s warm and salty. Not things I like in my mouth.”-Does it really matter who said this? The producers/writers of this show are clearly just F-ing with us.

“It kinda like fuels a fire under my butt”-Jade talking about her competition OR Carly after chugging a glass of goat’s milk? You decide.

“You are a man and I am a woman and I just want to take advantage.”– Carly before she makes out with Chris making a SOUND argument for feminism.

“Whatever you do don’t be yourself, be someone who gives better speeches.”-Kimmel summing up everything that makes me cringe about this show. Seriously, Chris, no more rose speeches. Revert to what you know…massaging everyone’s throats with your tongue.

I seriously tried to make this shorter because I understand that I wrote a novel longer than anything these bachelorettes have ever read for last week’s recap. Bear with me, I’m on the learning curve of being a brand new Bach-consumer. I hope that we can learn from this amazing journey together.