1. Fergie & Josh Head to Splitsville. After 8 years of marriage Fergie Ferg and Tad Hamilton are breaking up because WHY WERE THEY EVEN TOGETHER IN THE FIRST PLACE? Seriously. These weird ass Hollywood couples that pop out kids and sneak under the radar for far too long before breaking up always baffle me. Fergie used to wear Timberland heels, gold nameplated hoops & shiny track suits while she writhed around onstage with 3 other black guys rapping at her. Josh Duhamel is a rom com heartthrob. Yeah, ok. Sources say they were just “too different.”

That being said, London Bridge was my JAM back in the day. Grey Goose got the girl feeelin loooooose. (at the time of this release it was more like St. Bart’s got the girl throwing up, but whatevs, we can pretend.)

In super boring and dumb news that no one cares about, my boyfriend, who has spent the last 6+ months trying and failing at scooping me on celebrity gossip FINALLY got a W with this one. I guess it was about time, but like it doesn’t make me any less irritated about getting scoooooped. He’s handling it really well. If by well we mean bragging about it until the end of time.

The first celebrity news scoop for the boyf and he's taking the W with a slice of humble pie. NAHT. #fergieandjosh #scooooooped pic.twitter.com/eEPie1fMEt

2. Selena Gets A Kidney.

I’m very aware some of my fans had noticed I was laying low for part of the summer and questioning why I wasn’t promoting my new music, which I was extremely proud of. So I found out I needed to get a kidney transplant due to my Lupus and was recovering. It was what I needed to do for my overall health. I honestly look forward to sharing with you, soon my journey through these past several months as I have always wanted to do with you. Until then I want to publicly thank my family and incredible team of doctors for everything they have done for me prior to and post-surgery. And finally, there aren’t words to describe how I can possibly thank my beautiful friend Francia Raisa. She gave me the ultimate gift and sacrifice by donating her kidney to me. I am incredibly blessed. I love you so much sis. Lupus continues to be very misunderstood but progress is being made. For more information regarding Lupus please go to the Lupus Research Alliance website: www.lupusresearch.org/ -by grace through faith

I feel like Selena Gomez has some aggressive AF fans because any time she’s posting on social media it’s to defend herself because her fans have been up her bhole asking where she is. WELL GUESS WHAT. She’s been getting a kidney and stuff. EVERYONE COOL YOUR JETS. Not for nothing, but what a sly sneak back into the spotlight for Francia Raisa, star of Secret Life of the American Teenager. Not that I watched that show or anything (never missed an episode) but word on the street was that Francia played the slutty one of the high school who was preeettttyyy loose with her morals.

Nothing cleans up a bad gurl image–on ABC Family–quite like sacrificing an organ for your friend. Claps all around. Hopefully Selena’s rabid fans have been satiated with this very personal update. More importantly, thank you for bringing memories of the greatest show ever created back into my life.

So I guess this means Behati & Adam Levine are pregnant again although really with that picture and such a non-descript caption, it could also just mean she ate lunch that day and hadn’t taken a dump yet. Whatever. Here’s to another dumb name. Still bitter about Dusty Rose.

4. Yonce gets a headline about her lame dress.

I get that we’re all supposed to bow down to the Beyhive, but when she steps out to Rihanna’s magical ball in a $165 dress that’s hideous, I don’t think this is front page of People.com worthy. Snaps for her for getting her figure back post-twins ravaging her vagina (if she was actually preggers this time) but also, show it off with something nicer than this dress that peasants can buy to wear to their cousin’s fall wedding. COME AT ME, BEYHIVE. I’M ALL SORTS OF FIRED UP AND I AIN’T SCURRED. 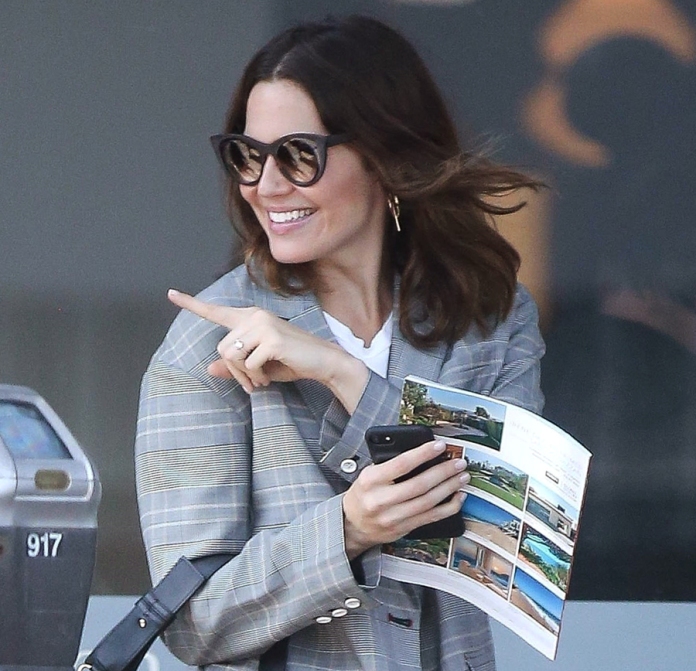 Mandy sneaky got engaged to Taylor Goldsmith, lead singer of Dawes this week and was inconsiderate by not posting a picture of the ring for us all to judge. This is the best shot we’ve got and you can BARELY see it. Step it up, Mands. I expect a close up by next Friday’s JUice. ESPECIALLY with the amount of press you know she’ll be doing for This is Us, the *groundbreaking* show we never stop hearing about.