The Mindy Project got “cancelled.” I put this in quotes because I’m still holding out hope that it will make a comeback elsewhere but in the wake of the news, I decided to throw together a collection of Mindy’s most relatable teaching moments and the things that we can all learn from leading a life full of bearclaws and Beyonce worship.

1. Don’t hide your fears. This was the most reasonable way I’ve ever seen someone react to a bug. I know firsthand because today on my patio a bee came near me and I screeched at an ear piercing decibel and almost ran through my screen door. Moral of the story, don’t ever repress your fears just because you’re in the presence of a hot guy.

2. Sometimes kids need to be told when they’re being dumb. Realistically this happens a lot…children aren’t the smartest. Big ups for Mindy trying to comfort this little whiner though because I would’ve probably told her to zip it. This was actually a preview into Mindy as a mom and let me be the first to say she will be a great one…fingers crossed we get to see it.

3. It’s important to know your limits. Listen, the fit lifestyle isn’t for everyone and Mindy knew she wasn’t winning Most Likely to Instagram #Fitspiration and #WorkoutWednesday and that’s much more important than actually being healthy. This would have been an ideal response to give to my doctor when she suggested I start walking to the train farther from my apt since I haven’t exercised in six months. C’mon, doc. 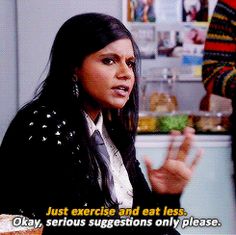 4. Work it. If it’s one thing Mindy isn’t lacking, it’s confidence and even when you haven’t showered and you’re wearing bulky layers topped off with a pair of sneakers called Fat Steps, you can still own it and compare yourself to Keira Knightley. Plus she knows it can be intimidating to have the brains and the booty. Same, girl…same. 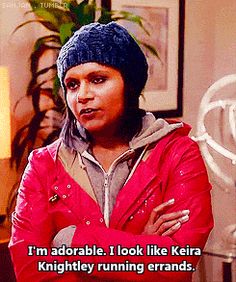 5. A conversation doesn’t count unless there’s a pop culture reference in it. Mindy may have a doc smart brain, but don’t even think about questioning her knowledge of the Kardashians. It’s important to be the one person in your workplace who brings everyone’s coolness factor up a notch or 100 and Mindy does that with her constant TV and pop music references. Plus what’s cooler than a Lil Wayne costume? Nothing.

6. Know how to dress for every occasion. Whether it’s your first time attending mass in a Catholic church or gym chic, every girl should have a go-to outfit for each environment. If we’re being honest I would prefer to sit behind Mindy in her derby hat at church because then I could read a book without anyone seeing. It’s a win-win really, Mindy is always looking out for others with her fashion savvy. 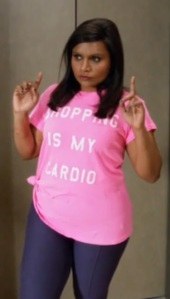 7. Food is not for nourishment, it’s for enjoyment. What makes life worth living? Having a belly full of candy like a piñata. Probably 90% of the show is Mindy stuffing her yapper full of steaks, pastries and washing it down with sour straws and it makes me feel a WHOLE lot better for bringing in a jar of salsa and a full bag of chips to work on a regular basis for a post-lunch snackin. 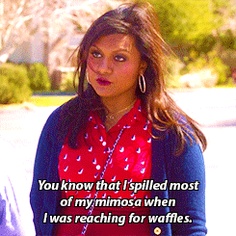 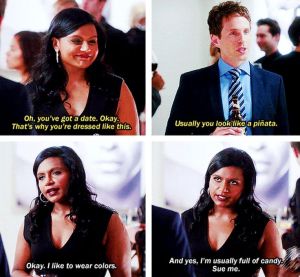 8. Set goals for yourself. If you want to be successful in life you need to have something to work for. Career goals are fine, but the real stuff is setting the bar for getting your own fan club, duhs.

9. Wine so hard. Sometimes you just gotta let loose and hit the sauce, just make sure that the sauce is wine and it’s sipped in moderation from your bra. (Side note: my birthday’s approaching and the wine bra would be a phenomenal gift.)

10. It’s ok to not have your shit together all the time. For the times when you maybe let the wine flow a little too freely from your 36B and turn into a slob kebab, it’s all going to be just fine. Mindy has had her fair share of suuuuper embarrassing moments and she’s come out on top still, so there’s obviously hope for all of us hot messes who spend their Friday nights watching a Youtube video of a baby that’s afraid of it’s own fart.