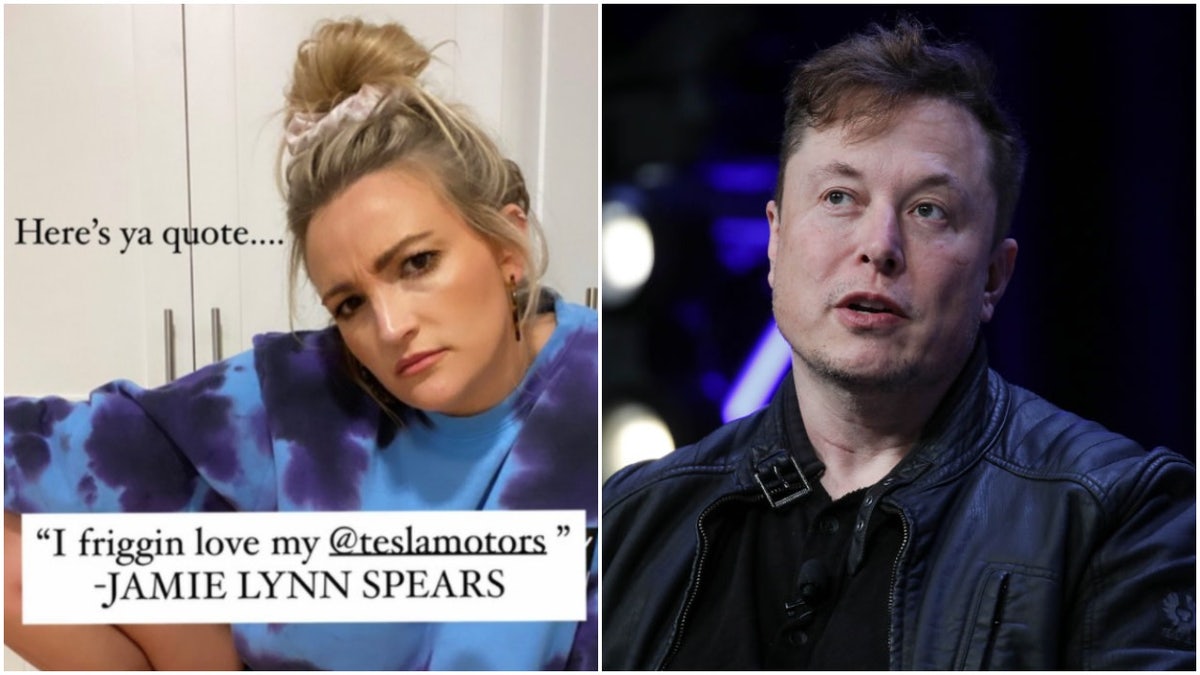 Listen, we’ve been on the Free Britney tirade for such a long period of time that I feel like maybe no one was paying any attention to Jamie-Lynn…and that’s on us. We took our eyes off of one Spears to focus on getting Brit off the drugs and give her some independence back and the younger one started killin a bunch of cats. That’s one way to act out and take the heat off your sister, JL. In one of the most outrageous celeb stories I’ve ever heard, Jamie-Lynn Spears came from the clouds with this video calling out Elon Musk for killing not one cat but MULTIPLE cats. I would assume that when your cat gets hit by a car, you immediately take it to the vet to see what you can do to save it. It’s gotta be on that vet to intervene, not the inventor of the silent car, no? On the second or third (dare I say fourth or fifth?) cat that you rush into the vet for emergency revival due to being flattened by a sneaky vehicle rolling in reverse I FEEL LIKE THERE NEEDS TO BE SOME SORT OF INTERVENTION. At the very least the Spears family should be on a universal no-fly list for adopting or purchasing any future cats or kittens. God, just typing that sentence immediately put that psychopants Carol Baskin saying “Hey all you cool cats and kittens” at the forefront of my brain and hot damn do I hate Tiger King for continuing to punish us almost a full year later. Anyway, from husband murderer back to cat murderer, we simply cannot allow this to slide under the radar that A) Jamie-Lynn is just killing cats left and right and 2) Rather than looking internally at how she can prevent it, like I don’t know, say CHECKING BEHIND THE CAR BEFORE HITTING THE GAS, she immediately takes to the web to call out Elon Musk for making such a quiet bajillion dollar car. Yup. This checks out. Elon must be stopped. He’s OUT OF CONTROL. FOR THE LOVE OF CATS, ELON, REDESIGN YOUR CAR. Obviously as soon as she posted this video and everyone called her a straight do-do brain and laughed directly in her face for how ridiculous and irrational this is, she deleted the video and tried to backpedal saying there might’ve been some user error, then tried to say no cats have been harmed. Girlfriend….you don’t say “we have now lost I don’t even want to tell you how many cats” if NO CATS HAVE BEEN HARMED. You say that when you’re covering up a pile of dead cats from you burning rubber out of your garage. And honestly, we all know how I feel about cats and I’m the first to blame them for everything because they’re all straight a-holes. But for once I’m on #TeamCat here. IT’S NOT THEIR FAULT! SAVE THE CATS! SAVE BRITNEY! SAVE JAMIE-LYNN! But seriously though, do a wellness check on the entire Spears family (and maybe change their social passwords for a trial period) cause shit’s getting out of control over there. Lock it up, guys. PS I think we all learned from the best true crime doc Netflix ever made, Don’t F*** With Cats TO NOT F WITH CATS…I assume Baudi Moovan and John Green are already on the case.

First we all end 2020 razzing HOARD on Ben for his Dunks and his packages and then not even two weeks later we learn he got dumped by this babe soda. Obviously Ben is no schlub in the looks department but I think we can all agree he was really outkicking his coverage with Ana de Armas whose career is just starting to blow up, plus she’s a Cuban-Spanish tamale. I mean, if that didn’t sell you…let me just remind you of this:

Case closed. As much as I feel sorry for Ben to lose his girl (after losing perfect angel Jennifer Garner) and have to live with that COLORFUL back art for the rest of his life…I can’t help but laugh my face off at this paps shot post-breakup:

Only in Hollywood do you have to THROW OUT A LIFE SIZE CUTOUT AFTER A BREAKUP. Let it also be known, “It took two people to stuff the cutout into the trash.” Good to know. It would be embarrassing as hell if the next time I went through a breakup I only had one hired help to take the cutout of my sig other to the dumpster when clearly it’s a job for two. No one wants to get caught by the papz struggling to throw out the ex. BREAKUPS ARE HARD ENOUGH.

You know there are few things I hate more than a hidden Hollywood baby. Justin Timberlake and Jessica Biel are mega superstars and they’re gonna try and sneak a baby out? Get the hell out of my face with that fresh garbage. You in Hollywood for life or you not in it at all. Babies, cheating scandals, what have you. You can’t pick and choose what you want us to hear about. SORRY CHARLIE. Dem’s da breaks. You get enough perks for us to know when you’re popping out kiddies. Obviously the news was leaked that Jessica had a baby during quarantine while they were holed up in Montana. And since I’m a bitter bitch who has wanted to be married to JT since I first laid eyes on him in the 90’s, I obviously pointed out that the timing of baby #2 coming after JT got caught with his hand in the cookie jar was preeettyyyy obviously a “let’s save the marriage with a baby” situation. Might’ve also been why they decided to keep it a big ole secret but maybe they should’ve told Lance Bass because he blabbed that shit almost immediately. God Lance, JT is never going to allow an N*SYNC reunion if you don’t shut your trap. Anyway, Justin confirmed the arrival of his second son, Phineas. How do a Jessica and a Justin make a Silas and a Phineas? I mean come on. Also, don’t think I was going to let Ellen’s flex slide either. She’s all, oh silly me I forgot you’re a dad again because when we were Facetiming forever ago you told me personally that Jess was pregnant because we’re BFF’s. You’re not Jimmy Fallon, Ellen. Take a seat. My eyes rolled down the block when JT told her she was one of the first to know. Ellen doesn’t need any more of an ego. So major lessons to take away here are 1/Tell Lance Bass nothing, 2/Next time you debut the news of your secret baby, do it on the Tonight Show with your real BFF J.Fall, and 3/I’m prettier than Jessica Biel. Case closed.

Let’s keep the train rolling with baby names I don’t like, shall we? Gigi announced this week via her Instagram bio (she’s so Gen Z it hurts) that her and Zayn’s daughter is named Khai. Immediately I assumed it was pronounced like Cobra Kai (shoutout Netflix) but when I sent it to my friend to razz on it, and she asked how we think it’s pronounced I realized that it is one of those names that you don’t immediately feel confident saying out loud. And let me just state for the record, I hate those kind of names. I need a nice straightforward name. I can see this name going either K-EYE or K-AYY and it’s a no for me, dawg. My friend had a much more diplomatic response saying she doesn’t love it but doesn’t hate it, it’s just not her cup of tea. And that’s why she’s a better person than me. I will never ever be diplomatic about a celebrity baby name. At least with parents like Gigi and Zayn, we knew we were in for a zany (wordplay intended) name rather than Jess and Justin trying to act out their frustrations at growing up with white wholesome American names. I also have no idea what Khai’s legal last name will be, which I feel like could make a difference about how much I hate it or not. Anyway, Geeg, if you’re reading this, hit us with a phonetic spelling, por favor. Also a picture of her face to see if she is on the fast track to being a model. TYSM.

Well he really wants us to remember him. I saw this photo and nearly puked in my hands. When bored, literally never ever ever bleach. No times a million, trillion, Ricky. Looks like someone’s having a hard time coming to terms with inching closer and closer to his 50th birthday. Let’s just take a trip in our time machines back to a time when if you were bored, you bleached just the tip instead. Cause nothing gets a weekend started more than a spicy horn section and some spiked tips.