What’s Timber-Tuesday, you ask? It’s something that I recently decided should probably be a thing. Do I need a specific reason to write a blog dedicated to Justin Timberlake and all of his fantastic qualities? No, I do not, because I run The Salty Ju and you don’t so HA. Sometimes, you get to Tuesday and realize the whole week is still ahead of you and you just need a little JT to make it better. We all know that Justin is the King of Pop and releases bangers on bangers, but he’s also funny as shit (especially with his BFF JFall) and devilishly handsome. So to get you closer to hump day (wink), here’s a tune, a skit and a model shot of ya boy JT.

This song is from 2002 and I could still probably listen to it 100 times a day. It’s Justin at his cockiest and although you might have to look past the knit hat (and the doo rag, and the fedora, obviously the 2000’s were a trial period for headwear) in this video, it’s also pretty gr8. Normally I’m against mid or pre-song talking but I think we can all agree that it’s AOK when Justin does it. Dance moves+Swag+Falsetto=The Best Kind of JT. DRUMS.

Laugh Candy (we’ll work on that one)

Probably my favorite JFall-JT sketch of all time and there are many. Even Madonna couldn’t ruin it for me, and that’s saying a lot. It’s gotten to the point where I can’t see the real Barry Gibb without laughing because all I can think of is these two goobs. 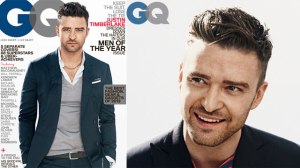 Ok, I think I can make it through the week now.