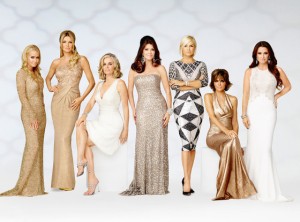 The bitches are back together, because Yolanda forced them to be for a little light physical activity and serious competition in the Fantastic Race. More importantly, ma gurl Camille is back. I’m assuming the girls are told to wear workout gear, which is why I’m not at all surprised that Kyle shows up in yoga pants with a pink belt slung around her hips. Stop being such a tryhard, Kyle. Kim hears the rules of the game and immediately says, “I don’t wanna” like she’s a child being forced to go down for a nap. The guys draw names for teams as if they don’t realize they’re throwing enemies together like Molotov cocktails, they totally do. It’s what they’re getting paid for. Brandi and Kyle are put on the same team of course. The rules are given very explicitly…no ubers. A loud collective groan is heard from the group of women who would take a taxi across the street.

Eileen is going HAM on this race and will take no prisoners, which is unfortunate because Kim is acting like she’s a prisoner on her team being forced to compete. Her knees are hurting and she doesn’t want to drink a milkshake wah wah, Eileen’s like FINE I GUESS WE’LL LOSE BECAUSE OF DEAD WEIGHT. It soon becomes clear that finishing a milkshake is probably the hardest thing you could ever ask this group of women to do. Kyle complains that Brandi left the herp on the straw they’re sharing and Yo & the Lisa sandwich team has an all out war for chocolate vs. vanilla. Chocolate wins and Yolanda doesn’t let anyone forget that she voted for ‘nilla.

Pretty much everyone involved in this activity hates it, and I can’t imagine why women who brawl every time they’re around each other wouldn’t love a group bonding scavenger hunt. It’s baffling. Eileen and Kim argue over how to open a clue, Lisa convinces her team to cheat and catch a ride, and finally when they arrive Lisa has absolutely no tolerance for the last puzzle and says F this let me in, I’m the owner of this joint. Due to technicalities, Team Eileen wins, and victory suits them well because they’ve stopped bickering long enough to accept the gold medal. The only camera time Camille got this entire race is when she said goodbye to everyone, for shame. Then Yolanda announces one more game and the rules are as follows: sit there and glare at Yolanda and she will surprise you with a rich people trip to Amsterdam. Ding, ding, ding, you’re all winners!!!

Then we get to the real meat of this week’s episode, watching everyone pack their designer gowns and delegate the stuff that they most likely never do around the house to the housekeeping staff for while they’re away. Life is really hard when someone tells you that you’re going to Amsterdam for a week to F around, I guess. Yolanda facetimes (she figured it out!!!) her mom to warn her of the crazy bitches that are about to invade her home country. This whole conversation is in Dutch and it is mesmerizing to watch the great Yo fluently speak in another language like a real cultured class act.

Speaking of class, the first leg of the trip begins and naturally it’s on a private chartered jet with the likes of Babyface. Before even boarding the plane, Kim reveals that she hates Rinna because Brandi two-faced Glanville threw Rinna under the bus to Kim. Hey Brandi, youse a dick. Yolanda acts as flight attendant once everyone has boarded the yacht of the sky, she walks around handing out magazines like chicken or beef—trash mag or GQ for you today? Within minutes of being in the air, Rinna calls Kim out for her pouty I hate you act and there’s no better place for a fight than when you’re stuck in the sky is what I always say. Kyle hides under a blanket while Rinna apologizes and Kim shouts DROP IT NOW. Whoa, that escalated quickly. Kyle is embarrassed that her sister is fighting in front of Babyface but let’s not forget that shitty song “I Love My Life” that BF made up at Yo’s dinner party so he should still be the one who’s embarrassed.

In Calgary, the women attend a charity event for the David Foster Foundation. Brandi rolls in wearing fake bangs that I can only assume she found at Claire’s and are velcroed on. Woof, girl. Yo gets up to speak about how obsessed with her husband she is, nothing new here, really. Kyle fangirls all over Steven Tyler and looks like a real creep…she brags about him kissing her but is this really something to brag about? Rinna dances like a Lakers Girl in the crowd and it is confirmed that I want Rinna at any party I ever throw.

Once the gaggle of housewives arrive in Amsterdam, chaos ensues. Kyle can’t find her rolling bag which contains all her jewels. It’s not a child…but it IS her jewelry. (Her words not mine, unfortunately.) Brandi reassures her by saying no one steals shit in Holland, it’s scientific fact. They all overload the escalator with their hundreds of bags containing juicers and an exhausting amount of outfit changes and create a pileup like a bunch of morons who shouldn’t be allowed in public. Then Kim shits in Kyle’s mouth for being late for once in her life. Everyone boards a bus from the airport to their destination where Kim and Kyle talk about each other to Yo and Rinna respectively while they sit one seat apart. Amsterdam is shaping up to be REAL entertaining and I look forward to next week to find out if Lisa is all talk or if she’s really going to hit that blunt.

-Rinna telling us in her aside that she hates the whole G-D scavenger hunt/race and then flips off the camera. Can’t hold a Rinna down.

– “We don’t have a fucking butler on this trip.”-Brandi just keepin it real. She doesn’t need a butler like Kyle does, all she needs is a headband with fake bangs attached to it to go with her evening wear.