To be completely honest I was about ready for quittin time after last season’s shit show of events. What drew me back in for the premiere and another season of recapping was the promise of fresh plastic and the cutting of dead weight. Brandi wasn’t in, Kim bowed out (was sent to rehab) and it gave me new hope for a season with less shrieking Euro-brawls and more displays of exorbitant wealth that these betches think is the norm. So I’m giving this season the ole college try and since they have yet to integrate the newly hired cast members who come off as “old friends” included in a group dinner party, last night’s episode was fairly boring and full of housekeeping. No, not the kind done by imported hired help, but the kind where we’re brought up to date on who’s still friends and who isn’t after they hurled insults at each other during the reunion.

First thing’s first…let’s discuss our new taglines. Kyle, taking a page from being the most obnoxious person alive, maintained her “I’m a Beverly Hills native but I’m SO down to earth and normal” shtick that she spews out a new version of every season. Oh Kyle, you’re soooo amahhhhzing and NEVER fake. Eileen uses her tagline to remind us she’s an actress. AS IF WE COULD EVER FORGET SHE WON AN EMMY. Seriously, her line was “I may be an actress but that doesn’t mean I’ll stick to your script” when really it should have been “I may be an actress but I also won an Emmy.” Rinna makes play on words about how she’s a blabbermouth AND has giant lips, showing she’ll never stop being self-aware. (“My lips were made for talking and that’s just what I’ll do.”) AND one of our newbies, Erika comes in HOT with, “I’m an enigma wrapped in a riddle and cash.” SO many questions and yet we still have yet to meet this broad. Most importantly, do we think she knows what enigma means?

Remember how Brandi spent all last season trying to lick Lisa’s vag for forgiveness? Well forgiveness was NOT granted but you know what…who needs Brandi when you’re throwing out a pitch for the Dodgers? Lisa has become somewhat of a LGBTQ celeb…the word celeb is used QUITE loosely here as I’m pretty confident her LGBTW advocate “work” was opening a bunch of gay clubs in Hollywood and being BFF’s with Lance Bass. Either way, she’s invited to throw a pitch and the Dodgers send hottie catcher AJ Elis over to “practice” or essentially just to be there while Lisa makes a bunch of ball innuendos and dirty jokes about her nonexistent sex life with her corpse of a husband. At the game, she wears the tackiest outfit I’ve ever laid eyes on and worries about throwing terribly. With a pink rhinestone trucker hat on I speak for everyone in the stadium when I say No1 currrs. Her throw doesn’t make it to the plate but that’s ok because she redeems herself by running with her boobs pushed out like she was gonna chest bump AJ and I’m disappointed that she didn’t, if we’re being honest.

While Eileen learns tired old storylines for the Young & Restless as she effortlessly pedals a stationary bike, Rinna feels like she’s made it because she was asked to do “Where Are They Now” on the OWN network. If Rinna’s pinnacle of her career is a show on a channel that no one knows, I can’t imagine what she would do if she got a network cameo. It’s okay to make jokes about Rinna’s acting career guys, cause she’ll do ANYTHING for money. EXCEPT a diarrhea commercial…yet she did one for depends sooo…how are these two things different? Either way these ladies are working hard for their money, while Kyle’s first appearance this season is picking out overpriced pink diamond studded sunglasses that I’m almost positive Paris Hilton probably rocked in the early 2000’s at the height of pink heels and jean skirts. Stay humble, Kyle. 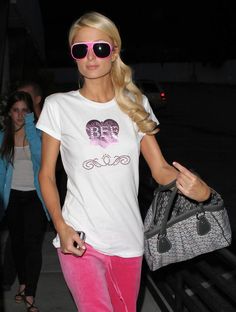 All of that dumb shit pales in comparison to what we really learned in last night’s episode. Yolanda has been basically wasting away from Lyme disease and all of her BH friends are terrible human beings who have left her to deteriorate and talk shit about her. Lisa and Kyle do lunch to compare rich people sunglasses and question if Yo is faking her Lyme disease to duck out of hanging out with them. These two are a couple of trolls. If I had a choice between lying on the couch and watching TV or going to a party with them I’d choose the couch 110% of the time and I’m a healthy individual. Even though Lisa doesn’t really like Yolanda because she yelled at Ken one time three years ago, she still is “concerned”. Obviously not concerned enough because when they all roll up to Rinna’s birthday dinner, Lisa makes a point to say that Yolanda looks like a pile of dirty garbage.

Leave it to Kyle to wear a romper designed for a 25 year old to Rinna’s birthday so she can talk about how she doesn’t like wearing shorts all night while Yolanda rolls up with no makeup, her hair pulled back and a casj monochromatic number. She brings a new friend with her who happens to be the mom of Cody Simpson. They became friends from their kids dating but stayed friends on camera so that Cody Simpson’s mom can get a reality show contract, probably.

Anyway, after witnessing that horrific birthday dinner full of people staring at Yo with their mouths open like Kim Richards just stumbled in and laid across the table with a turtle, I pretty much lost faith in humanity. This woman attended dinner without a makeup artist spending hours on her face painting a masterpiece and her friends couldn’t form a sentence without dribbling wine on themselves from shock and disgust. Yolanda was a SUPERMODEL. She literally still looks like a SUPERMODEL without makeup. Yeah she looked roughsicle but it’s because she’s sick so everyone STFU and stop making her feel like dust. AND THEN KEN…the crustiest old man with a blowout announcing that he only complimented Yolanda to make her feel good because it’s his duty on this earth to make girls feel great with his fake compliments. VOMIT. I can’t WAIT for YoYo to tear him a new one at this season’s reunion. Anyway, moral of the story, Rinna your birthday and where Harry Hamlin is on your speed dial means absolutely nothing when someone has the nerve to arrive without eyelash extensions, k?

Things that made me laugh:

-Rinna making her daughter work at a deli to buy her own car yet taking both girls shopping at a boutique where the tees are at least $50. #AllAboutThatBudget

-Eileen deciding to downsize/redecorate her home literally because Brandi compared it to a trunk full of shit from Antiques Roadshow last season. I find this downright hilarious. The haters gonna hate, hate, hate and I’m just gonna listen to them and change my life accordingly.