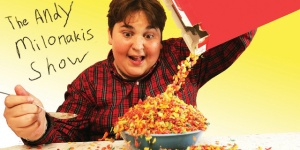 So there are things that you think are really funny when you’re younger, especially in the pre-teen phase and you look back on them once you’re an “adult” and wonder why the hell you ever laughed at it. I’ve recently discovered that I don’t ever look back and think something was immature/unfunny. For example–when my dad asked where the deoderant aisle was in Target the other night and I replied with “up your butt and around the corner” then laughed about it for 5 minutes afterward. That was a middle school phrase, I believe…back when it was still taboo to say butt at school and yet here I am at 24 laughing like a maniac about a sentence that doesn’t even make sense but uses the word butt and therefore is hilarious. I guess this rant is bringing me to the fact that I used to watch The Andy Milonakis Show religiously and just recently I stumbled upon something that reminded me to look it up again and found myself still laughing along to a fully grown man-boy terrorizing deliverymen and old NYC residents. Therefore I decided to point out the best gags from this show that I still find funny (and still reference)–and if you’re a mature human being you will absolutely hate this blog…and Schmandy Schmiloshmakis.

For the record I once knew every single word to this theme song. I think it was cooler back in the day though.

In this prank he orders chinese then when the deliveryman shows up Andy declares that he has a coupon and out comes a 90 year old woman wearing a sash that says coupon and she just proceeds to shout in her crusty voice, “I am the coupon!” Coupon is already a weird mom word but ever since this skit I can’t hear the word coupon without instantly transforming into a walking discount. 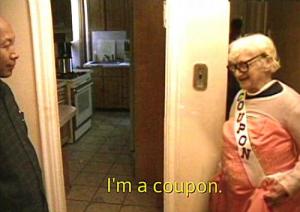 Wubbie was Andy’s dog who unfortunately had to put up with a lot but actually did very little in the show–except for when she had telekinesis for a hot second. I hope to one day have my own show where I can get paid to shout at my dog in a high-pitched baby voice. Mostly because this is already how I interact with any dog, stranger or not. They probably also imagine shooting me when I force cuddles and delfies. Fun fact though, my family dog Casper got nicknamed Wubbie after this show came out because we thought it was an A+ pet name. May he R.I.P. See below for the time we shoved his fluffy body into a polo and he gave us some serious side eye. Oh, wubbie, wubbie, schmubbie…

I was about to say that. (Watch here.)

Some of Andy’s best work was when he hit the streets and mocked strangers. This bit was where he would ask random people questions then finish their sentences and say he was going to say the exact same thing. There’s no quicker way to irritate people than to repeat everything they’re saying, unless of course you do it while they’re talking and insist that you were going to say it first. It’s genius.

Have a nice day.

Another street number, Andy would hand out balloons and say depressing things then tell people to have a nice day. It was usually old people he interacted with and you could tell they had no idea what was going on and probably thought this was a sad 12 year old boy, which made it even better. Props to the salty guy who admitted he also had no soul. Did they just become BFFs?

Andy sometimes did the character “Muti” representing a Jewish grandmother and instead of S’s he blew out of his nose. No seriously, that was it. And it made me giggle. And I’m not ashamed to admit it.

One thought on “The Andy Milonakis Show”