This year there may not have been as many events for celebs to get Halloween glammed up for but that didn’t mean these attention grabbers couldn’t get into full costume just for Instagram. Here’s a collection of what the people of Hollywood (or Hollywood adjacent) decided to dress up as this year…and I’m floored that no one went as the year 2020, which turned out to be scarier than any horror movie. Keep scrolling for your one stop shop of all the costumes and unsolicited salty commentary from someone who dressed up as an aunt trick or treating with her niece and a spiked apple cider because she’s too old for Halloween and yet still childless and single. I looked like a real babe soda though, so HA.

This was basically a Neutrogena commercial but I don’t even care because Jennifer Garner is cute as a button and I’ll put whatever she tells me to put on my face to look like her at 48.

I’m kind of over the Karen thing like I’m over people blaming a year when someone famous dies but considering I didn’t see any other Karen’s in the mix this year I’d say Kelsea crushed it.

Jade and Tanner are a bachelor couple which means they’re Z list on the fame scale and yet that didn’t stop them from doing about 13 family costumes for instagram with full photoshoots. Ah, to be able to cash in on that ABC reality TV money would be the dream. I decided to choose one of their costumes for a shout out. I felt like this was a solid family Schitt’s Creek costume. Everyone looked on point. Plus mini David and Alexis are just too adorbs.

I didn’t think minions were still a thing but cute fam costume especially to the kid who was like F it I’m just gonna be a rainbow fairy.

I think these gals are all on the same show, not 100% sure because I don’t watch it but I think this is a solid modern Powerpuff costume for three chicks who probably weren’t even born yet when Powerpuff Girls was on Cartoon Network. Does Cartoon Network even exist anymore? Either way, classy and cute.

Get it, Brie! Use that nursing rack to your advantage for a saucy costume!

I hate on these two a lot but it’s only because they deserve it. Who the hell puts a little fake blood on his face and GOES AS HIMSELF BUT “BEAT UP.” Dumb costumes, 0.0 for effort and gag my face off to your need to post an open mouth smooch as well.

This family goes all out every Halloween and when you’re incorporating a green screen into your shoot, I think you know how next level you are.

Again, full-on photoshoot for Halloween. That’s kind of how things went this year. Everyone’s so desperate to get a fit off during quarantine that they’re like yeah let’s just do a magazine cover photo for Halloween on my Insta. I stared way too long at this pic trying to figure out if the snake tail was edited in or a very real looking costume.

I love that Snooki went from being the trash monster that got arrested for getting a day buzz down the shore to full-on mom doing a family Disney costume.

Ciara was another one who did about 14 different costumes for the gram. She was emulating her favorite female artists but going for the Janet/Busta combo deal was my fave. Anytime you act out a music video you’ve won me over.

Demi wants everyone to know that she did her own makeup but I can’t stop looking at her yabbos in that first pic. I mean, damn.

Kaitlyn nailed this one, Jason gave me nightmares. It’s the weird yellow-green hair and white facial hair for me, bro.

Lizzo also dressed as the fly on Pence’s head at the debate and obviously did some twerking on his grey hair but honestly a catsuit made of pool liner was the clear winner for me. WAP has given us so many gifts this year.

Fun Fact: I still follow Ryan Cabrera on Instagram. What can I say, “Take It All Away” was a life changing album for me. Anyway, so was Napoleon Dynamite. What a classic movie that deserves to be honored. Now I can start dissing people with “your mom goes to college” again.

Pretty basic costumes but obviously Chrissy looked like a stage-quality ballerina. They BETTER have recreated the Spidey kiss.

Gonna be honest, I’ve seen better from this fam. I know that’s tough to hear sometimes but this is why I’m the one laying in a red fuzzy bathrobe judging rich people Halloween costumes and you’re not.

This was my choice for the Jenner gals. Kendall also dressed up as Pamela Anderson and Kylie dressed up as all of my uncomfies. So I went with this lovely sister throwback. Solid nostalgia recreation but HOW IN THE HELL DO THEY HAVE SKINNIER WAISTS AS ADULTS?! Is that real life?! I’ve never been skinnier than when I was a 9 year old string bean. These two are either addicted to photoshop or addicted to waist training but holy moly.

Honestly Alec Baldwin looks like a very convincing Hagrid. Even though this beard/wig combo looks very dollar store-esque, I could see him reviving the role. Also, tough break to be the kid who ends up shitty Draco Malfoy. 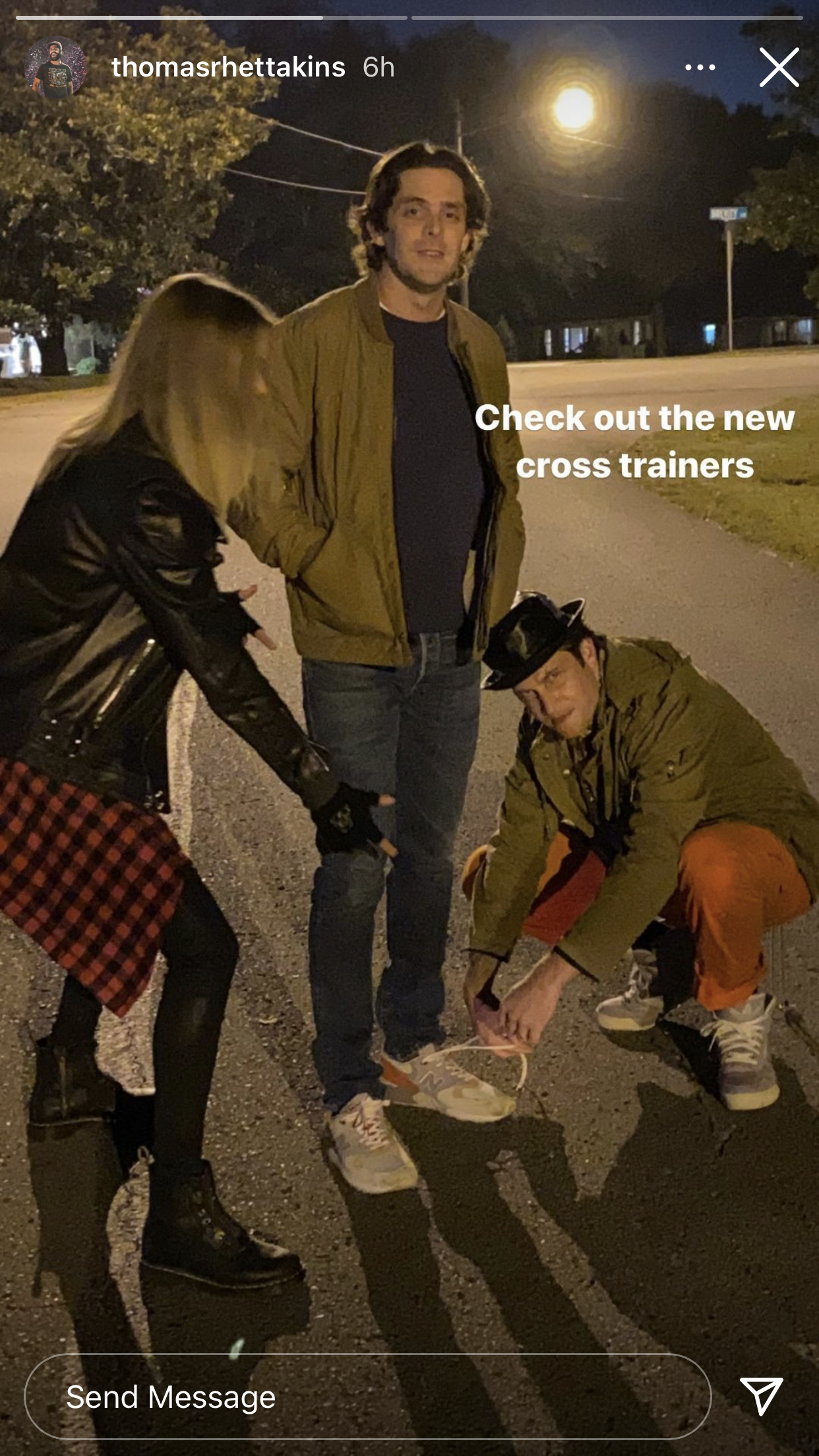 TR went full Hocus Pocus and I loved every second of it. Him and his friends getting sauced and reenacting the cemetery scene is absolutely something I would make my sister do. I had my annual viewing of Hocus Pocus a couple nights ago and that scene is so preposterous and 90’s. The only way it could’ve been improved was if it ended in a bball game like 3 Ninjas. TUBULAR.

Dino and Safari Dads even posed in front of the greenery to really sell the jungle angle.

Guess HP is making a comeback. This begins my bone to pick with celebrity halloween…if you’re not down with posting pics of your kid’s face (a lot of celebs aren’t these days), WHY ARE YOU POSTING PICS WITH THEM IN IT?! Take a couple pic without the child if you’re looking to show off your costume. Otherwise, I’m getting ABSOLUTELY nothing from a family photo where you’ve emoji’ed your kids face out.

So this Donald Trump: A Series, not only scared the poop out of me but also made me wonder where this was going? Is the point to show Donald Trump as a homeless man? Because I can assure you that if the Donald gets voted out of office, he will be far from homeless… And not for nothing but Glenn Close basically proved to us with this costume that she can add a blonde wig and look SCARY identical to Trump. Not something to toot your horn about as he is most certainly not an attractive older male.

Lil Nas X showing us what he’d look like with a couple of SuperBoobs.

I wanna squeeze the stuffing out of this little marshmallow. The white sunglasses really sealed the deal. Gabrielle looks like a bangpiece in that chocolate dress, which is a real strong vibe for trick or treating but whatever.

Mindy is literally obsessed with Reese Witherspoon so it’s no surprise she recreated this show.

I’d kill for a Clueless costume. Those plaid-fits were the SHIT growing up.

That’s a whole lotta blue makeup for a photo and I’d be terrified that it wouldn’t come off but Halsey really went for it.

Let’s revisit the emoji-kid hiding. The ONLY reason this picture was posted was to show that they trick or treated with their kids together to stir up some headlines, which everyone took the bait of. “Kristin and Jay spend holiday with kids amidst divorce!!!” Dirty move, Kristin. Jay looks like a total bad boy babe though.

JLo did Madonna better than Madonna does Madonna. Is that surprising in the least?

And ARod went as the Boss. God these two are cool as hell.

What do you do if you have endless amounts of money? Rent an actual DeLorean for a Halloween photoshoot.

Breaking News: Apparently fairies are also known for wearing lingerie you can see their nipples through.

Leave it to Kim to do the MOST played out Halloween costume of 2020. And do it with her kids and “FoodGod”. Where is the most most most most most genius man of all time tho? He didn’t want to dress up as Joe Exotic’s teenage boyfriend?

Not only did Kris go for it, but she plugged Kylie cosmetics at the same damn time. No days off when you’re the biggest Momager in H’wood.

Drew Barrymore’s show may have been the most awkward talk show I’ve ever watched but she started strong with the Halloween costume game. 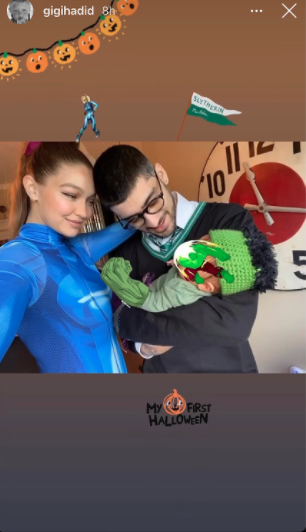 First look at Zayn and Gigi’s daughter OPE JUST KIDDING SHE HAS A FREAKING EMOJI ON HER FACE. Everyone cut the shit with the emojis. Keep your photos personal since you obviously don’t want your child in the spotlight. Don’t post shit with their face covered like it’s some creepy crime to know what your offspring looks like. Also of course Gigi has bounced back FLAWLESSLY. 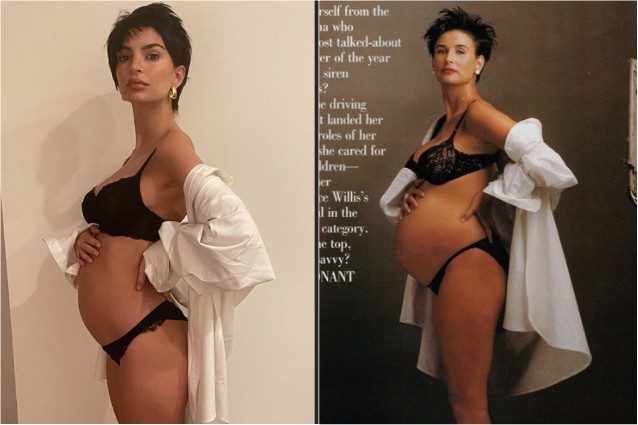 A little ode to pregnant Demi. Slight belly difference but I appreciate the throwback.

Schitt’s Creek and Tiger King were hot in the streets this year but I thought out of all the Live with Kelly & Ryan looks, they really nailed Moira and David. Must be nice to basically get your hands on the original wardrobe they used. 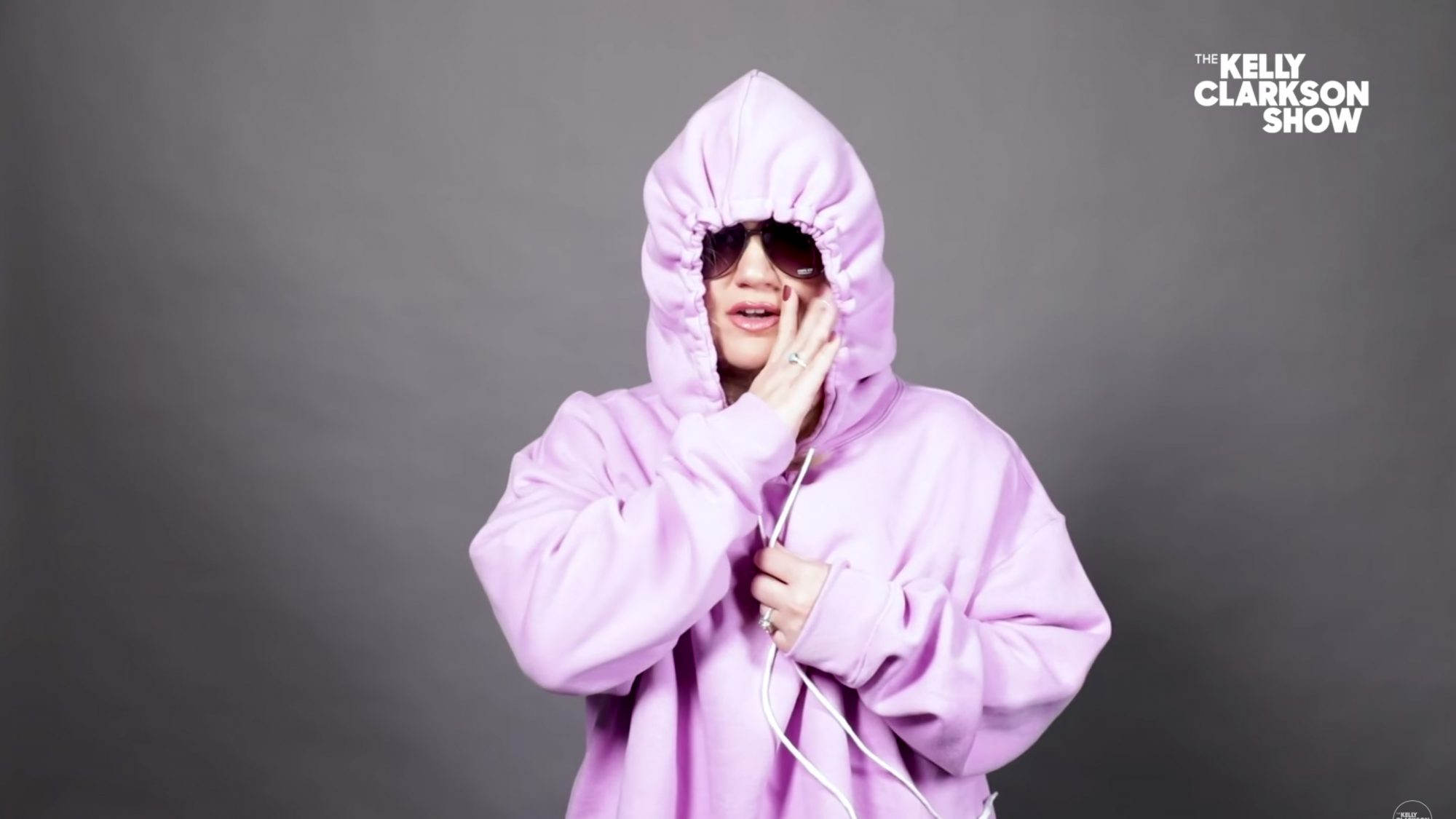 Easily one of my faves. Everyone goes big and Kelly Clarkson tosses a sweatshirt and shades on for a 2004 pop culture reference. That’s why she’s the best. SHE DOESN’T EVEN GO HERE!

I’d be remiss to not include the Today Show even though they didn’t have one good photo to share of the whole crew. So this will have to do. They went as Broadway stars, again probably going to Broadway itself to get glammed up. 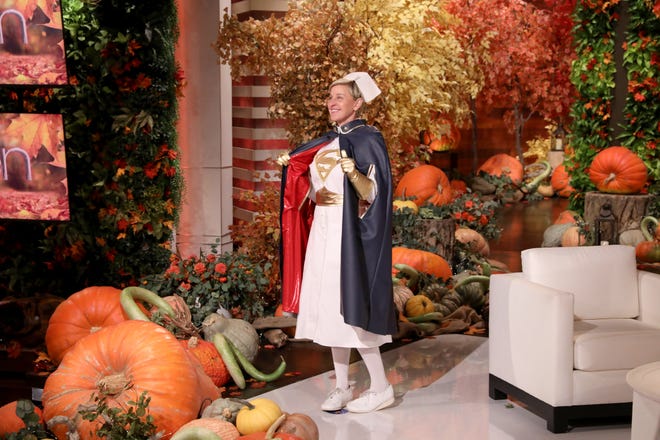 WHAT A TROUTSNIFFER. Ellen WOULD go as a nurse and call them superheroes right now. GROVEL HARDER FOR PEOPLE TO LIKE YOU AGAIN. IT’S NOT GOING TO WORK.

And the self-proclaimed Queen of Halloween’s great unveiling was…

A wall. Heidi Klum went through like 8 hours of makeup to blend in with a wall. I will quite literally never understand where she comes up with this shit but more power to her. She’s basically taken ownership of Halloween. Even went so far as to make a “horror film” with her whole family this year since her party where she parades around in her over the top costume couldn’t happen.